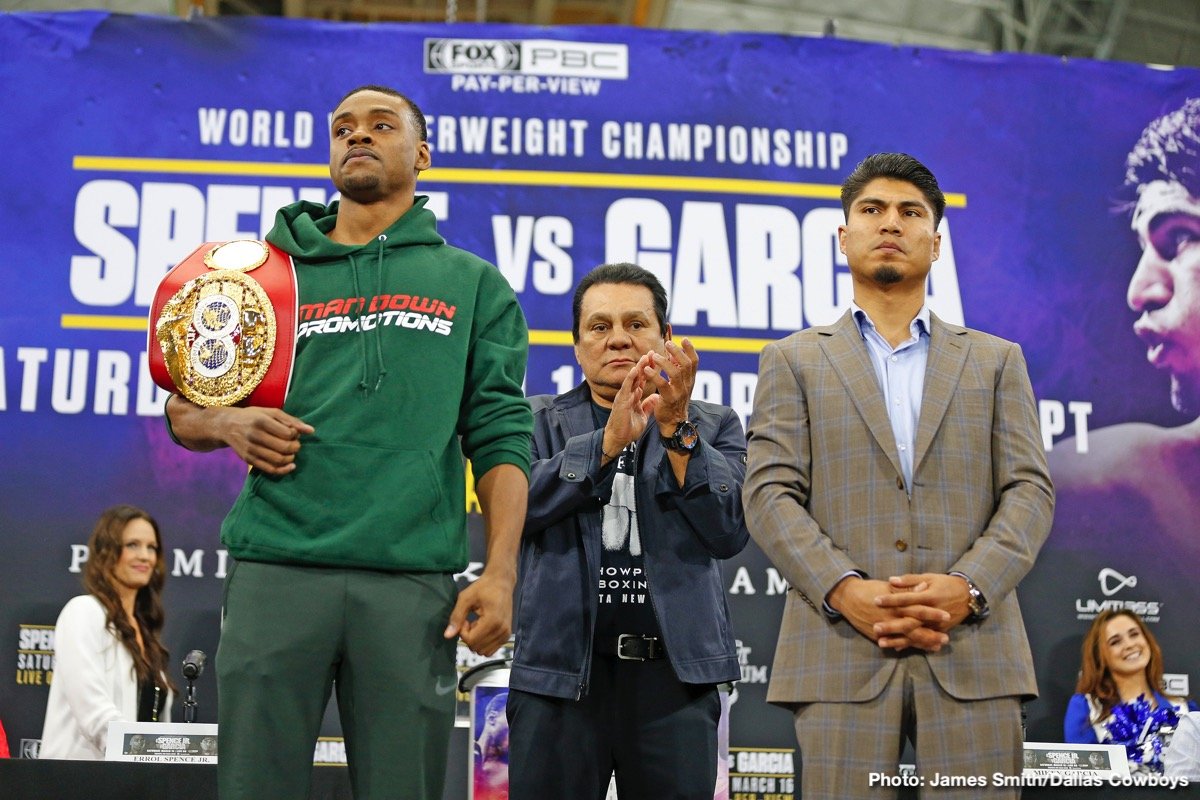 Errol Spence is facing, in fellow pound-for-pound star and fellow unbeaten Mikey Garcia, the toughest foe of his career thus far; on paper at least. Yet many fans and the majority of fight experts are picking Spence to be too big and too strong for the four-weight champ (in a poll on RingTV.com, the tally was 15-8-1 in favour of the reigning and defending IBF welterweight champ).

It’s a massively interesting fight and opinions have swayed a good deal no doubt. But Spence, 24-0(21) has no doubts, and he never has – he will get the win, Not only that, but as he said at the final press conference in Texas, Spence will go on to become the best fighter in the world with this, his latest win. Spence said, as quoted by Ring, how he will become both the pound-for-pound number one and “the face of boxing.”

Spence said that the size difference between he and Garcia, 39-0(30) “won’t matter,” that in terms of “skill for skill and talent for talent,” he is “more dominant than him in every aspect.” Southpaw Spence, who will be making the third defence of his IBF belt on Saturday night went further, saying the fight will be “a one sided massacre.”

“I’m gonna punish him,” Spence said. “He’ll wish he took his brother’s advice not to take this fight.”

This exact scenario and the very real possibility the fight may indeed turn out to be a one sided affair in favour of the naturally bigger, taller, longer-reached man, is just what has turned off a few fans. It’s all up to Garcia, who is shooting for history, to join those special few throughout boxing history who managed to make a mockery of the old adage, ‘a good big ‘un beats a good little ‘un.’ We’ll soon find out whether or not Mikey can do it.

But if Spence does pick up his 25th win, perhaps his 22nd KO, does he become the best in the world? Better than Vasyl Lomachenko? Canelo Alvarez? Gennady Golovkin? Terence Crawford (the man we fans really want to see Spence fight next if he is victorious at the weekend)? Perhaps Spence will still have more to do before he’s seen as the top dog at the top of the P-4-P pile, but his will certainly be a case worth making – if he beats Garcia.

The pressure is on Spence, as he is the favourite (if only slightly), the bigger and younger man, and the man fighting at home. Yet as confident as he is in his abilities, this pressure to win will very likely bring out the best in Spence. If Garcia is able to stick around long enough.