Errol Spence Jr. sent a cartoon Instagram picture to Terence Crawford today to let him know that he’s on his way to pick up his last strap to become the undisputed welterweight champion.

WBO 147-lb champion Crawford (38-0, 29 KOs) is the last man standing in IBF/WBA/WBC champion Spence’s way from capturing his final strap in the division before moving up to 154 next year.

In a war, last Saturday night, Spence (28-0, 22 KOs) defeated WBA champion Yordenis Ugas (27-5, 12 KOs) by a tenth round knockout to become a three-belt 147lb champion at the AT&T Stadium in Arlington, Texas.

Ugas put up a good fight for the first six rounds, but by the seventh round, Spence took full control of the fight and battered him nonstop with a mix of head & body shots.

“Had some hiccups on the way but you know what time it is now champ… time to be legendary @tbudcrawford .. #thebiggest #strapseason,” said Spence on Instagram.

After the way Spence administered a beat down to Ugas, Crawford has got to be more than a little concerned.

The 34-year-old Crawford obviously doesn’t want to take a similar beating from Spence because it’ll be not only painful but also embarrassing.

All the talk of Crawford being #1 in the 147-lb division and deserving of being the #1 pound-for-pound, it’s going to look silly if he’s destroyed by Spence in the same way he did to Ugas.

“I couldn’t really see it but I saw him go back, but after the referee explained to me what happened, it’s kind of like, ‘Okay, you realize that he got hit on the break basically,'” said trainer Derrick James to Fight Hub TV on what happened in the sixth round when Spence Jr turned around after getting his mouthpiece knocked out by Ugas.

“I was like, ‘Oh my God, how is this going to work?’ He recovered.I couldn’t put the mouthpiece back in right then. So when there was a lull in the action, that’s when you put it back in.

“A little bit,” said James when asked if he intentionally took his time putting Spence’s mouthpiece back in. “You got to think about it, it’s a game. He was happy. When you come out and see what he saw [a filled-up AT&T Stadium], that’s an emotional moment, man.

“All these people came out to see you fight, that’s crazy. They spent their hard-earned money. They think they’re going to see what they saw. That’s what they want to see,” James said when asked why Spence’s boxing fans come to see his fights. 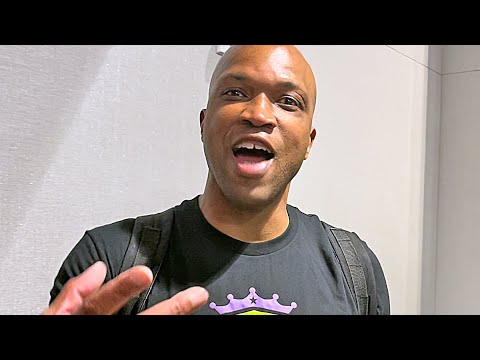