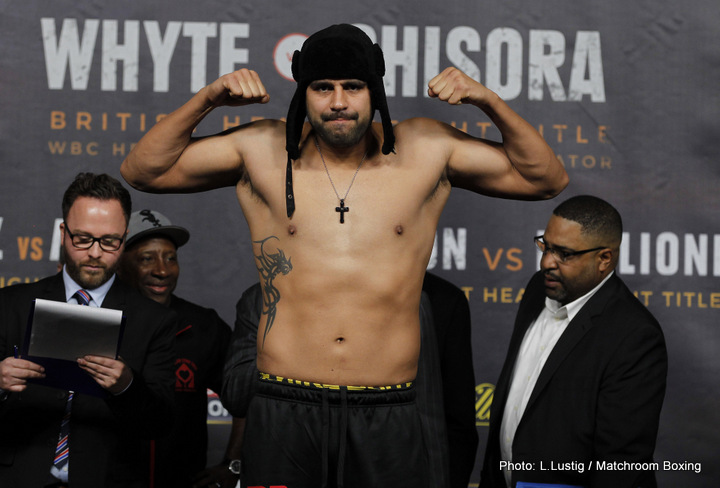 As fans may have heard by now, heavyweight contender Eric Molina has been suspended for two years by UKAD for a failed drugs test that occurred after Molina’s December 2016 fight with Anthony Joshua.

Molina tested positive for an anti-inflammatory, dexamethasone, that was present in the B12 vitamin supplement he readily admits to having taken – not only ahead of the Joshua fight (which Molina lost via 3rd – round stoppage) but ahead of a number of his other fights. Molina is stunned by his punishment, insisting that he is a clean fighter who has never before failed any test and who has been regularly tested by UKAD for the past five years – all without incident.

Speaking with UK Boxing News yesterday, Molina said that he is deserving of some punishment but not of the maximum two years he has been given. Molina, quite rightly, also asked why other “big-name” fighters who get busted for taking “the heavy stuff like steroids” are punished far less severely and are “back in the ring, their ranking reinstated, six months later.”

Molina, who feels he is being treated incredibly unfairly, will not be permitted to box again until next October, 2019. The anti-inflammatory Molina took is on the UKAD list of banned substances, but two full years does seem a harsh punishment for he having unknowingly taken what in effect is not even a Performance Enhancing Drug, or PED. Take the case of Canelo Alvarez for example: he tests positive for a steroid yet is suspended for just six months. Is this fair?

As Molina says, he has no “big time lawyer” to defend him and he is so sick right now he is strongly thinking about walking away and quitting boxing – a sport that he loves; or loved.

Again, Molina is not denying he took the anti-inflammatory – albeit by accident as it was contained within the B12 injection he readily admits to being injected with – and he accepts he should be punished; but he argues how two long years is simply too much.

It does seem to be a harsh punishment and why it has taken so long to surface is another curious factor in this case (17 months since the Joshua fight in the UK). Molina says now his sole focus is on bringing light to the fact that “things are not done right” in this side of the sport, and of clearing his name.

Molina cannot live with the fact that fans are reading articles that refer to him as being a cheat. Molina deserves the benefit of the doubt here – do you not agree?

It’s almost a side-bar now, but Molina’s fight with Mariusz Wach, scheduled for this Friday in Poland, is now off. Molina did say though, how the Polish commission told him he could still fight Wach in their country. Molina does not know if his suspension is in effect in the US only or worldwide.