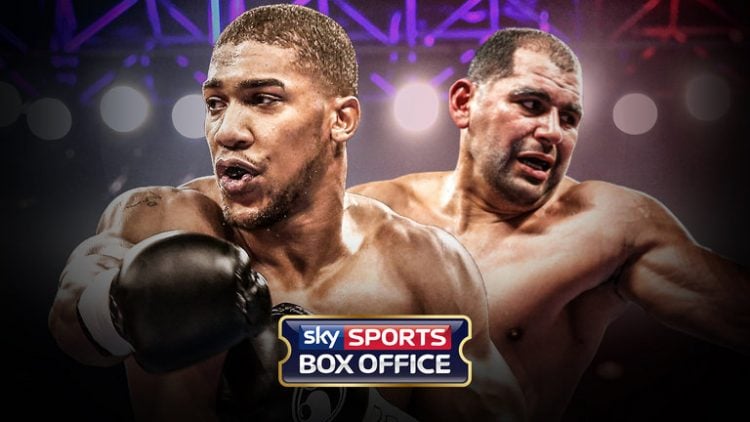 British Olympic gold-medallist, Joshua, will defend his crown for the second time as he takes on his third American opponent in a row, looking to extend his 17 fights, 17 wins record. While the spotlight may be on Joshua and Molina, the night also offers an impressive undercard fight with Dillian Whyte going head-to-head with bitter rival and fellow Londoner, Dereck Chisora.

Boxing fans will be able to relive every move with repeats at 9:00am and 4:30pm on Sunday the 11th December, while TalkTalk’s Plus TV customers can record the fight and re-watch the champions battle it out until 00:01am on 12th December.

TalkTalk TV is offering access to more sport than ever before. Not only can boxing fans keep up with all the ringside action on Box Nation, all TalkTalk TV homes have access to every major televised football match – including all Premier League and UEFA Champions League fixtures – live on a single platform, through TalkTalk’s Sky Sports boost and through access to BT Sport. Viewers also have the choice to watch international cricket, rugby, Formula One and all four golf majors. Available for 30 days at a time with no ongoing commitment, TalkTalk TV’s boosts offer choice and flexibility at great value.

If strength of schedule had anything to do with a boxer’s ranking, Eric Molina (25-3, 19 KOs), of Weslaco, Texas, might be rated amongst the top boxers in his division.

Consider: In June of last year, Molina went to Birmingham, Ala., to challenge undefeated WBC Heavyweight World Champion Deontay Wilder (37-0, 36 KOs). Molina, a prohibitive underdog, lost but had his moments, including staggering Wilder with a wicked shot in the third round.

This past April, Molina traveled to Poland and knocked out one of that country’s all-time great champions, Tomasz Adamek, in the 10th round.

And now, on Saturday, Dec. 10, live on SHOWTIME, Molina will travel to Manchester, England, to challenge unbeaten IBF Heavyweight World Champion and hugely popular local favorite Anthony Joshua (17-0, 17 KOs). Once again, he will enter the ring as a significant underdog.

“A lot of heavyweights haven’t walked the streets that I’ve walked through,’’ Molina said. “This is an evil sport. You lose, they write you off. It’s hard to bounce back like I have. Nothing has been given to me. I’ve earned it. I’ve done it the hard way. I enjoy the world underestimating me, but they don’t understand the struggles I’ve been through.

“This is my second world title shot, my third major fight in 18 months, and I’ll be the first Mexican-American heavyweight champ in history if I win. I’m coming into this fight like this is it for me. This is my last shot. I’m ready to fight with everything I have.

“I love these big, big fights. They don’t scare me. There is no fear in me.”

Here are Molina’s responses to a recent Q&A:

On his upcoming assignment against Joshua

“I feel great about this fight. These are the kinds of fights I want and want to be in. Before I fought Wilder I had 35 days to train; for this I’ve had about five weeks. We feel this gives us plenty of time to fix what we have to fix in training.

“The magnitude of this fight is everything. I put everything in. But I know I have to stay focused and relaxed.”

What do you think of Joshua?

”Obviously, he does a lot things well, but there are a lot of areas to his game we haven’t seen yet, and I’m going to test him in those areas. He really hasn’t had to take too many punches in his fights. I’m going to have to put him in spots where he’s uncomfortable. There has to be a game plan and there will be for Joshua.”

Who are the top heavyweights in the world?

“Joshua has got a great attitude. I’d say he’s the No. 1 heavyweight, ahead of Wilder and Tyson Fury.”

On how this fight came about

“Once I got wind that the Klitschko fight might not be happening, I started thinking, ‘well, if not Wlad, then who?’ I looked at the rankings and didn’t see a lot of possibilities so I knew I had a chance. Then, I got a call from Eddie Hearn with an offer and I signed a few days later. I feel truly blessed. I feel like this is my time.”

How would you describe how your career is going?

“I no longer second guess what I can do. Fighting on the road so much; fighters need that kind of experience to compete against a fighter like Joshua. You have to stay in the moment and keep focused at what you are there to do and not allow the atmosphere in the arena get to you.

“I’ve fought some of the biggest fights on the road, so I’m accustomed to it and definitely think that is my edge over (Dominic Breazeale and Charles Martin).

Where are you training?

“I’m training in Weslaco with my team at my own private gym. We’ve brought in some sparring partners. I took a year off from teaching so I was in the gym anyway, but now I’m training for a world title again. We’ve been working hard, putting in extra time on strength and conditioning. The plan is to take our time, try to put everything together and not rush anything. So far we’re right on the mark.’’

When do you depart for England?

“We are leaving on Dec. 2 or Dec. 3. Before that, I just need to concentrate on staying in the moment, which is to continue focusing on training and letting the future take care of itself.’’

What were your takeaways from the Wilder fight?

“In the Wilder fight, look at the first knockdown. You see how I landed on my left ankle. I rolled it over and it hurt – and got worse — but I kept fighting. The ankle was in a cast for six-seven weeks afterward.

“Take out the Wilder fight and it puts me in right in the mix with any heavyweights in the world. For me, that fight was confirmation that no heavyweight can just run through me. That is one of the differences between my attitude now and before.

“At one point I didn’t have the experience –I had no amateur fights – or the confidence I have now. I now know what I can do and can’t do, I know my strengths and weaknesses more and just feel that I’ve matured into a top contender. I’m now confident in my power and the things that I can do.’’

How do you rate the victory over Adamek in your last fight?