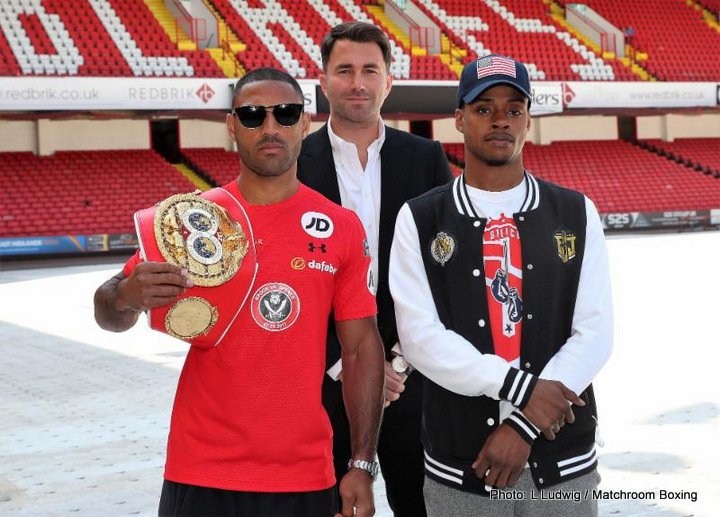 Former IBF welterweight champ Kell Brook simply has to win on Saturday night, when he will face talented, tough and experienced 154 pound contender Sergey Rabchenko. Coming back as he is from back-to-back losses to Gennady Golovkin and Errol Spence, the Sheffield warrior is well aware that it will be a case of ‘three strikes and you’re out’ if he comes unstuck once again.

Promoter Eddie Hearn, in speaking with Sky Sports, said that he himself was surprised when Team-Brook agreed to fight Rabchenko in such a crunch-fight. That said, Hearn plans to have Brook back in action quickly – in June or July – if he does get the comeback win on Saturday.

“With the injuries and the defeats that he has had, it’s just about getting through Saturday,” Hearn stated. “That’s all we care about. I’m really surprised Rabchenko was the guy that [Team-Brook] chose because he can punch and he comes forward relentlessly. He is a pressure fighter but that should suit Kell. We will see where Kell is at in his career, at 154. He has got to make the most of what he has left – probably three to five fights. The plan is to box again quickly, in June or July. Then to jump in the deep end towards the end of the year, in an ideal world against Amir Khan.”

The Khan-Brook fight simply refuses to go away, and this will not change as long as both guys are still fighting. Hearn though, did mention some other names as possible opponents for Brook, in Jermall Charlo, Sadam Ali and even Manny Pacquiao.

But as Hearn and Brook know all too well, Rabchenko, 29-2(22) has to be dealt with first. In terms of the facial injuries around his eyes Brook suffered in his two defeats, Hearn says Brook has been sparring hard in the gym and that there have been no problems.

Look for Brook to pound out a tough and close decision win against Rabchenko.