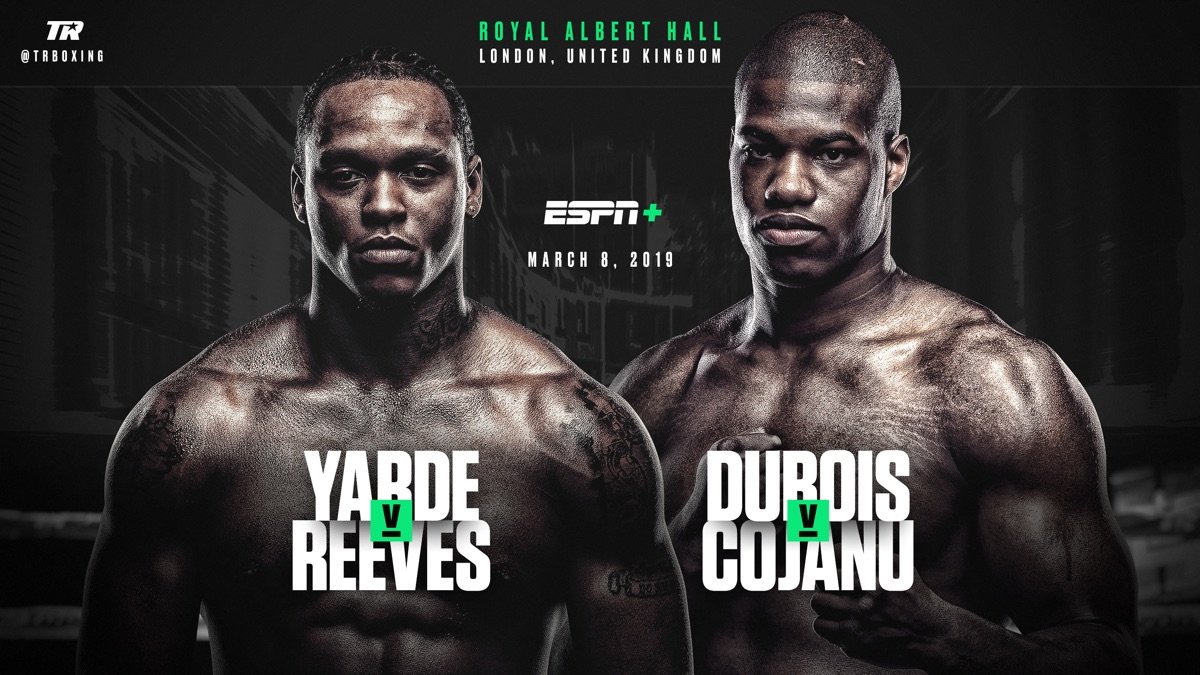 Two of the biggest punchers in British boxing — light heavyweight Anthony Yarde and heavyweight Daniel Dubois — are ready to put on a Friday afternoon show for American fight fans.

In the main event, Yarde will defend his WBO Intercontinental belt in a 10-rounder against Baltimore native Travis “Seveer” Reeves at the historic Royal Albert Hall in London. In one of the co-features, Dubois will battle former world title challenger Razvan Cojanu in a 10-rounder for the vacant WBO Global belt.

Yarde (17-0, 16 KOs) has knocked out 15 opponents in a row, a streak that dates back to his second professional bout in June 2015. He is the WBO No. 2 contender for the belt currently held by Sergey “Krusher” Kovalev. Before a potential world title shot, he must get past Reeves (17-3-2, 7 KOs), a 38-year-old Baltimore native who has won two bouts in a row. In his last ring outing, Jan. 17 in Las Vegas, he knocked down Lanell Bellows (18-3-2 at the time) twice en route to a well-earned unanimous decision win.

Dubois (9-0, 8 KOs) is the latest in the long line of fearsome British heavyweight punchers, a London native who has turned heads since turning pro in April 2017. His only decision victory came in his last bout, a dominant performance over veteran Kevin Johnson that streamed on ESPN+. Dubois was originally supposed to face Cojanu in December, but he contracted the flu during fight week and had to pull out. Cojanu (16-5, 9 KOs) challenged Joseph Parker for the WBO heavyweight title in May 2017, losing a unanimous decision in a game effort. In his most recent bout, he pushed unbeaten prospect Nathan Gorman the 12-round distance in a losing effort.

In other action live on ESPN+:

Liam “The Machine” Williams (19-2-1, 14 KOs) will make the first defense of his British middleweight title against “Smokin” Joe Mullender (11-2, 5 KOs). Williams won the title on Dec. 22 with a thrilling 10th-round TKO over Mark Heffron.

About ESPN+
ESPN+ is the multi-sport, direct-to-consumer video service from The Walt Disney Company’s Direct-to-Consumer and International (DTCI) segment and ESPN. It reached 2 million subscribers in less than a year and offers fans thousands of live events, on-demand content and original programming not available on ESPN’s linear TV or digital networks, along with premium editorial content.