Dmitry Bivol knows enough about his opponent Gilberto ‘Zurdo’ Ramirez to feel confident that he’ll successfully defeat him this Saturday, November 5th, when he defends his WBA light heavyweight title on DAZN at the Etihad Arena, in Abu Dhabi, United Arab Emirates.

Bivol’s mobility could give Ramirez nightmares in this fight because the big 6’3′ Mexican fighter has struggled in the past when facing guys with quick feet.

Although Ramirez has been doing a lot of running to get in great shape, it probably won’t help him move around the ring any faster than he normally does.

The undefeated Bivol (20-0, 11 KOs) and former WBO super middleweight champion Zurdo Ramirez (44-0, 30 KOs) have sparred together, and they know their weaknesses.

Ramirez is a huge southpaw with excellent power, particularly with his left hook. His bread & butter punch is his left hook to the body, but for him to land it consistently, it requires that his opponents stand directly in front of him, preferably with their backs against the ropes.

Bivol isn’t likely to accommodate Ramirez by standing perfectly still against the ropes on Saturday night, so he’s going to have to move around the ring to try and cut off the unbeaten WBA 175-lb champion.

Ramirez, 31, says he’s on a revenge mission, wanting to avenge Canelo Alvarez’s loss that he suffered against Bivol last May. For some reason, Ramirez feels it’s important to avenge Canelo’s defeat, even though he’s already made it clear that he won’t fight Mexican fighters.

That rules out Ramirez getting the chance to share the ring with Canelo and get a big payday as Bivol did. Bivol is the only one with a shot at fighting Canelo, and even that’s not certain.

Canelo already changed his mind once about fighting Bivol again when he chose instead to face 40-year-old Gennadiy Golovkin in a trilogy match last September.

It’s predictable that if Bivol soundly defeats Ramirez, Canelo may choose to go in another direction for a second time. So, in reality, the Bivol-Ramirez winner likely won’t get a shot against Canelo.

“You don’t have fear of your opponent in the ring. You have fear that you’ll disappoint yourself. That’s my biggest fear. Not just in boxing but in life too,” said Gilberto ‘Zurdo’ Ramirez to Matchroom Boxing ahead of his title fight this Saturday night against WBA light heavyweight champion Dmitry Bivol.

“For me, every fight means everything. It means my chance, my opportunity. to grow as a boxer. We [Bivol] used to train at the same gym, and we shared the ring a couple of times.

“Yeah, I think he was good. That’s the only thing I remember. Every fighter has his own style. Every fighter is different. As a fan, I like his style. I like the way that he moves, but as a fighter, I want to fight him because he’s one of the best, and I want to be the best.

“I met him four years ago,” said Bivol about Ramirez. “Of course, he’s a good boxer. He’s not an easy fighter. When I take the fight, of course, I believe in my victory. But it’s not just stupid believing.

“I think about now I’m going to fight against another guy. How many years is he in this sport? 10 or 20? I’m in this sport since I remember myself. I have a plus,” said Bivol. 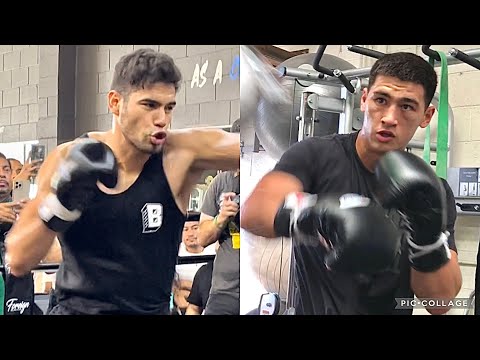