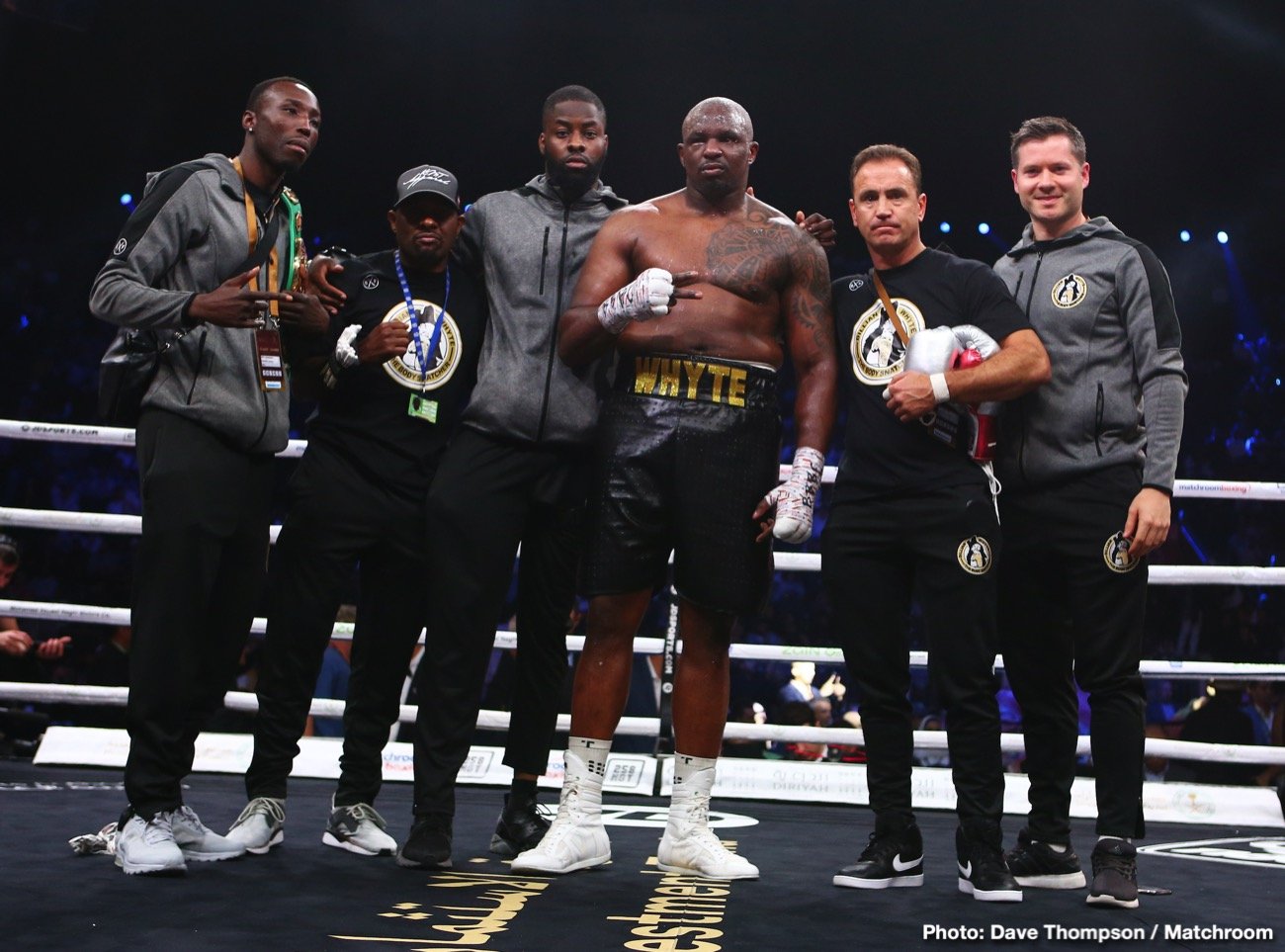 Heavyweight contenders Dillian ‘The Body Snatcher’ Whyte (27-1, 18 KOs) and Alexander Povetkin (35-2-1, 24 KOs) are still in negotiations for a fight in April or May on DAZN.

The former WBA heavyweight champion Povetkin remains the leading option for Whyte’s next fight, despite Matchroom promoter Eddie Hearn making an offer to Andy Ruiz Jr. to face Dillian next. Povetkin is someone that Whyte would have a better chance of beating than he would if he fought an in shape Ruiz.

Povetkin less of a threat to beating Whyte than Ruiz

What we saw from Ruiz in his wins over Joshua and Alexander Dimitrenko, he would be pure trouble for Whyte. Ruiz is capable throwing combinations, and he’s hard to beat when exchanging with him. Whyte is more of a one punch at a time fighter, who has been matched against a lot of weaker opposition since his loss to Joshua in 2015.

Povetkin is the more doable fight for Whyte than Ruiz, who would likely break the bank in his asking price and requirements.

Matchroom has a lot of options for Whyte

If Matchroom strikes out in getting Povetkin or Ruiz Jr. for Ruiz Jr. to fight, then Hearn will need to have a plan-C opponent. A lot of boxing fans would be interested in seeing Whyte fighti American Michael Hunter (18-1-1, 12 KOs). He’s coming off of a 12 round draw against Povetkin on December 7 in Saudi Arabia.

Hunter started off strong in flurrying on Povetkin in round 1, and looked like he was close to stopping. Where Hunter made an error was his decision to start loading up on single shot, and Povetkin took advantage of this by countering him with stronger shots. Had Hunter continued to flurry on Povetkin, he probably would have stopped him in the first 4 rounds.

These are some of the other fighters Hearn could match against Whyte:

“Sources: Dillian Whyte remains engaged in negotiations with Alexander Povetkin for a bout in the same timeframe in the U.K. Whyte appears destined for a significant fight in the spring regardless,” said @MikeCoppinger.

Usyk WON’T be matched against Whyte

Matchroom could use Oleksandr Usyk for Whyte to fight if the former unified cruiserweight champion doesn’t fight IBF/WBA/WBO heavyweight champion Anthony Joshua next. However, Matchroom promoter Eddie Hearn wants Usyk to fight Dereck Chisora next, which isn’t nearly as great a fight as Whyte-Usyk. It’s obvious why Hearn doesn’t want to match Usyk against Whyte.

Those are two separate revenue streams that Hearn has for his Matchroom stable, and both guys are capable of winning world titles. They’re also useful as B-side opponents for Joshua to bring in a lot of money.

If Hearn puts Usyk and Whyte in with each other, the money won’t be nearly as good as it would for him to put them in one at a time with Joshua. That’s why Hearn is looking for alternative opponents for Whyte to fight like Andy Ruiz Jr. or Povetkin. By doing that, Hearn won’t mess up the big payday fights for Joshua down the road against Whyte and Usyk.