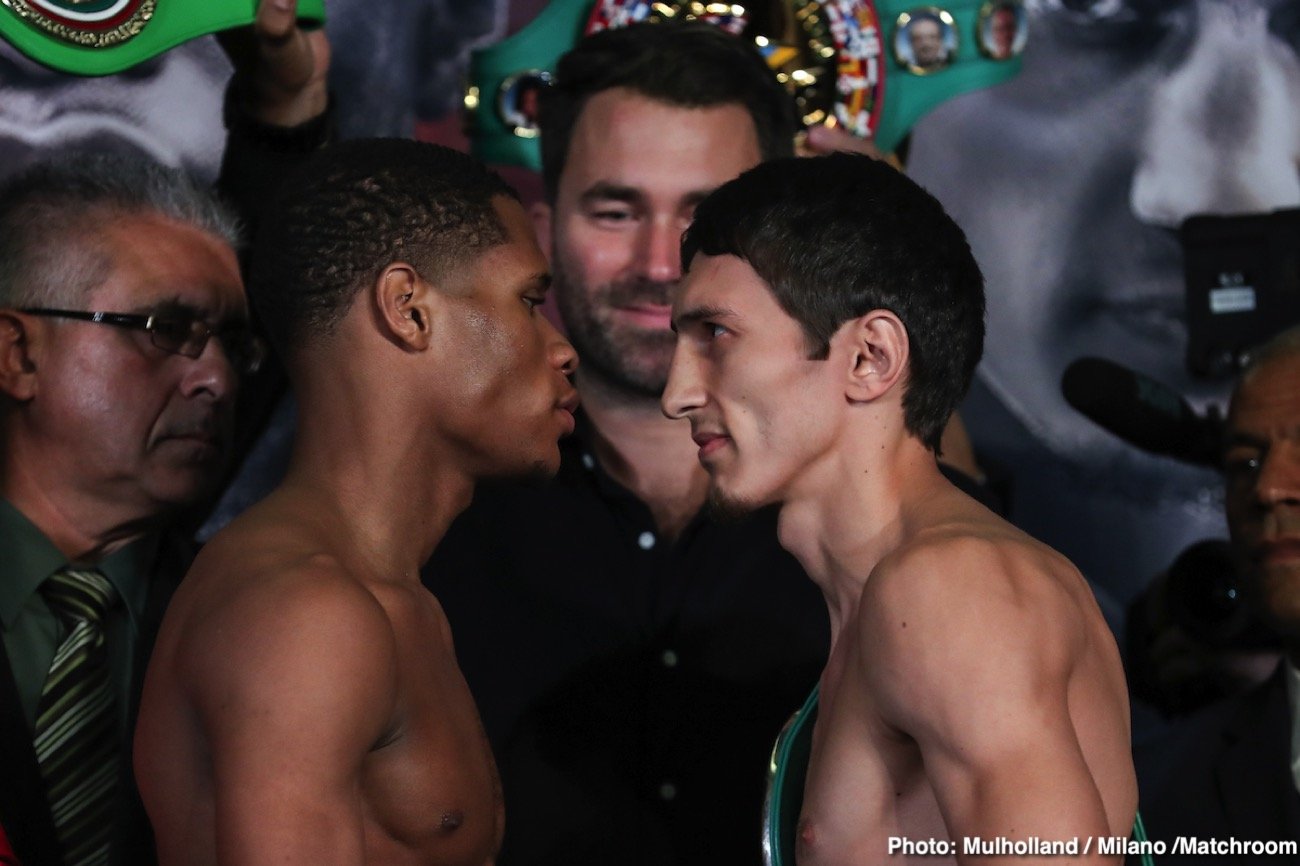 
Devin Haney can take a huge step towards becoming a World champion on Friday night – but the Lightweight sensation revealed on the debut episode of season two of Matchroom Boxing’s ‘Born Fighter’ show, he turned his back on football to dedicate his life to his dream of becoming a hall of fame fighter.

Haney (22-0 14 KOs) takes on Zaur Abdullaev (11-0 7 KOs) for the Interim WBC World Lightweight title at the Hulu Theater in Madison Square Garden, New York live on DAZN in the US and on Sky Sports in the UK, with the winner hunting down a clash with newly-crowned champion Vasyl Lomachenko.

The Las Vegas star has risen rapidly in the paid ranks since his pro debut at 17 years old in Mexico in December 2015 having dedicated his life to the sport, but in the first show of the new series of ‘Born Fighter’, Haney reveals he had to make a choice between boxing and football as a prodigious talent on the field – but as he fights in the biggest fight of his career just after the first weekend of the 100th NFL season, ‘The Dream’ doesn’t regret his decision to devote his life to the sweet science.

“I was good at football too, really good, and there came a point when I chose boxing over football. One day, I just quit football and I never went back to the field! I never went to practice. And, I just told myself to dedicate my life to boxing and I don’t regret it for one second. I knew that if I dedicated myself early that it would pay off in the long run. And, I never really worried about ‘being a kid’ when I was growing up, I just wanted to fight.

Haney: I always knew how to fight

“I always felt that I knew how to fight. I loved to fight,” said Haney. “It was false confidence really as I didn’t know what I was doing, but I knew what I was, and confidence can go a long way. Professional fighting? I don’t know when I thought about that. I remember my first amateur fight and first tournament, my first national, my first trip overseas but I don’t remember thinking ‘I want to be a pro’ but I was young and I dedicated myself to it at an early age.

“Once I started boxing I wasn’t getting into trouble at school anymore and everything fell into place and I think that boxing helped me, but i don’t think that I was ever going to go down a dark road like a lot of people say, I think that I would have done something positive with my life whatever happened.”

Haney kicks off season two of ‘Born Fighter’ with the focus on fights in the American stable at Matchroom Boxing USA after 11 episodes from the British and Irish stable featuring Katie Taylor, Luke Campbell, Dillian Whyte, Joshua Buatsi and more.

Haney’s clash with Abdullaev is part of a huge night of action in New York as record-breaking seven-weight World champion Amanda Serrano challenges WBO World Featherweight champion Heather Hardy in an all-Brooklyn affair, brought to you by DiBella Entertainment in association with Matchroom Boxing USA.

Serrano (36-1-1 27 KOs) conquered her seventh weight class at the Hulu Theater in title in January when the Puerto Rican destroyed Eva Voraberger inside the opening round to claim the vacant WBO Super-Flyweight title.

Serrano held the WBO Featherweight strap in 2016 before vacating it then her sister Cindy picked it up later that year. Hardy (22-0 4 KOs) was next in line to win the vacant title in October in a rematch against Shelley Vincent in the Hulu Theater. Hardy put boxing on hold to return to MMA in June with an outing at Bellator 222 at Madison Square Garden but returns to boxing to go head-to-head with her fellow Brooklynite.

The Heavyweight landscape remains a hot one and there’s a great 50-50 clash on the card as Michael Hunter challenges Sergey Kuzmin for the WBA Intercontinental title. Hunter (17-1 12 KOs) holds the International strap with the WBA having KO’d Alexander Ustinov in Monte Carlo in November and defended that with a second round KO of Fabio Maldonado in Maryland in May. The 31 year old is rapidly rising in the rankings and can take a huge leap towards World title action with a win but faces a crunch challenge in the form of Kuzmin (15-0 11 KOs).

The unbeaten Russian puts the strap he won at Wembley Stadium in London in September against David Price and first saw off LaRon Mitchell and then Joey Dawejko in successful Stateside defenses. With Kuzmin ranked #5 and Hunter #8 with the WBA, the victor in New York will be knocking on the door for a title shot, raising the stakes in this pick’em match-up, in association with World of Boxing.

Tickets are on sale now starting from just $30 plus fees and available here: https://www1.ticketmaster.com/