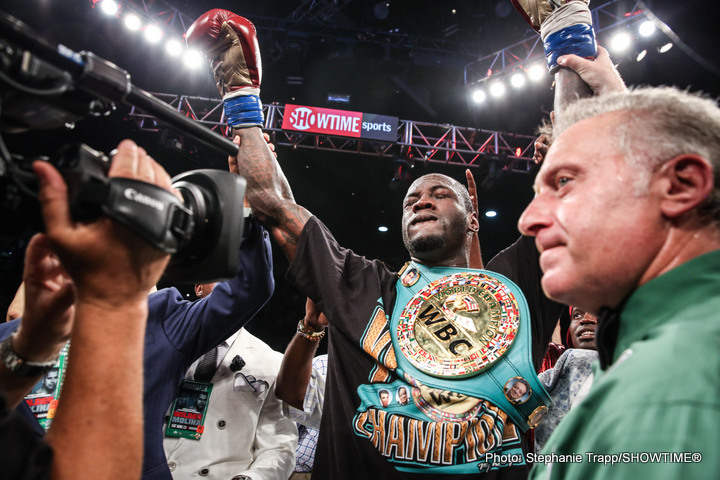 In 10 days from now, WBC heavyweight champion Deontay “Bronze Bomber” Wilder (35-0, 34 KOs) will be in the ring defending his title against Artur Szpilka (20-1, 15 KOs) at the Barclays Center in Brooklyn, New York. The fight will be televised on Showtime Boxing in the United States, and on Sky Sports in the UK.

In the co-feature bout, unbeaten Vyacheslav Glazkov (21-0-1, 13 KOs) puts his unbeaten record on the line against the undefeated American knockout artist Charles Martin (22-0-1, 20 KOs) in a fight for the vacant IBF heavyweight title that was recently stripped from British heavyweight Tyson Fury.

The IBF ordered Fury to start negotiations for the defense of his title against Glazkov, but Fury was unable to accommodate them due to him being locked into a rematch with Wladimir Klitschko for early this year.

Wilder wants to fight Fury in a unification fight if he can get past the 26-year-old Szpilka on January 16th. However, it’s more likely that Wilder will end up defending his WBC title against mandatory Alexander Povetkin next. The World Boxing Council has already ordered Wilder to face the 36-year-old Povetkin next.

The only way that Wilder can bypass Povetkin is if the WBC allows him to face the winner of the Fury-Klitschko rematch in a big unification fight. That would be a fight that would be good for boxing, so it’s possible the WBC will allow Wilder to do this if there’s interest from the Fury vs. Klitschko winner in facing him.

The WBC ranks British heavyweight Anthony Joshua #2, and he could be a potential future opponent for Wilder if he does not go after the winner of the Glazkov-Martin fight. Joshua’s promoter Eddie Hearn could move Joshua in that direction because it is an arguably more winnable fight for Joshua.
“Once I knock Szpilka out, I want all the Polish fans to come on the ‘Bronze Bomber’ train as I bring the heavyweight division back to the top,” Wilder said. “I’m the guy who has everything it takes to be heavyweight champion of the world. It’s not just about being great inside the ring, it’s about being able to do great things outside of the ring. Not everyone has that. I love to be out there with the people.”

Szpilka is an underdog in this fight, and he’s going to need to bring his A-game if he doesn’t want to get blown out of the ring in the first two rounds.