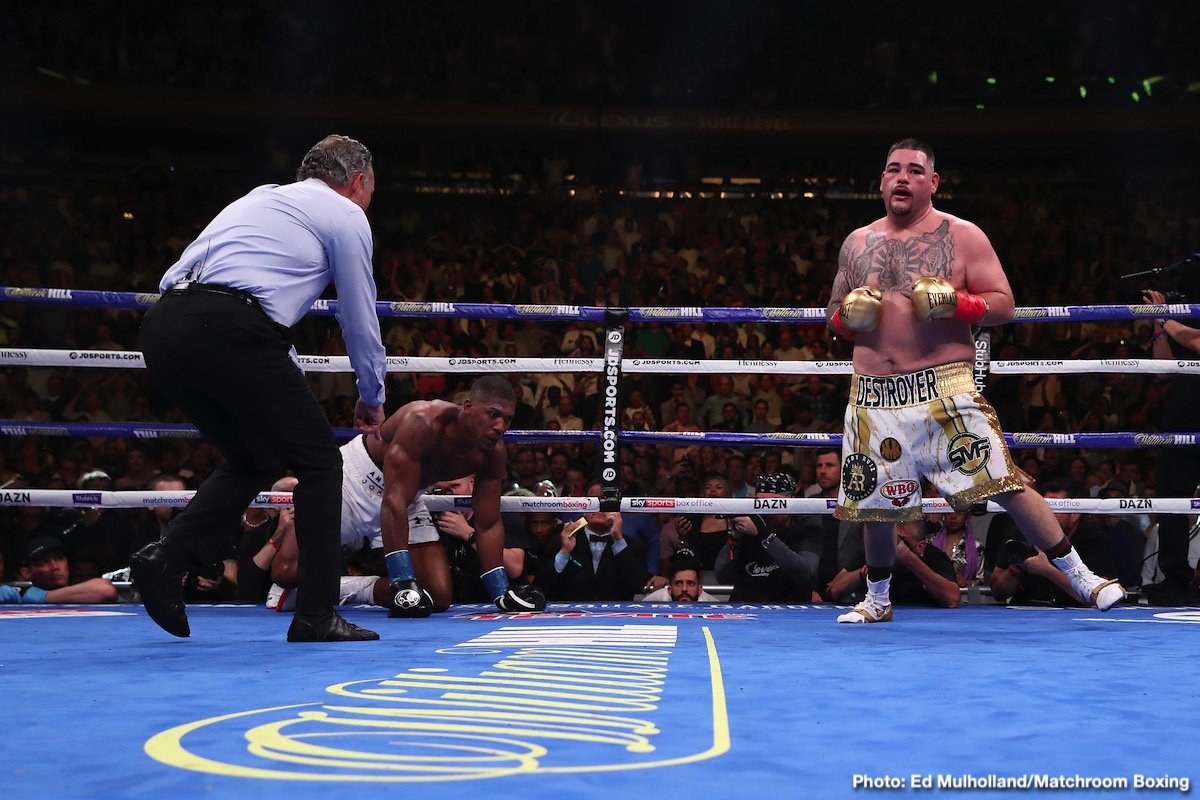 Wilder also said that Joshua “quit” in the fight, and that he sees him now as a “broken man” from the loss.

A huge congratulations to you @Andy_destroyer1 for your upset win last night. You’ve been blessed to come out of the struggle and to become the 1st Mexican Heavyweight Champion Ever!
Wow, that’s amazing and I’m wishing you many more blessings to come. pic.twitter.com/IqdRX6Yzo0

“P.S It’s all up to you in what you do with this huge opportunity. There’s many perks that comes behind it.
Blessings 🙏🏿✊🏿
#BombZquad #SuperHappy4U #TilThisDay”

Many boxing fans want to see Wilder face Ruiz Jr. in a clash for the undisputed heavyweight championship of the world. However, that match likely will be prevented from going through by Joshua and his promoter Eddie Hearn, as they have a rematch clause in the contract for last Saturday night’s fight. Joshua says he wants the rematch with Ruiz “100%.” Hearn is already talking about rematch between them, but it won’t be decided until when/if Joshua will take the fight.

It’s risky for Joshua to fight Ruiz again right now, because he could very well wind up like David Price. For the boxing fans that don’t remember, Price’s career was going swimmingly until he ran into veteran southpaw Tony Thompson in February 2013, and was stopped in the second round. Price should have moved on, and picked up more experience before looking to face Thompson again. Unfortunately, Price fought Thompson just five months later in Liverpool, and was knocked out in the fifth round in July 2013. Price’s career has never been the since then.

It might be better for Joshua to go his way and let Ruiz Jr. keep the titles without trying to win them back immediately. If Joshua can put together a string of wins, and show that he can handle fighters with hand speed, then it would be a good time to face Ruiz. Right now, Joshua would be asking for trouble if he faces Ruiz in an immediate rematch in November or December.

Joshua was expected to be back in the ring in November, but he doesn’t have to fight Ruiz then. He can face a softer opponent like David Allen, Dereck Chisora, Zhilei Zhang or Agit Kabayel. In other words, Joshua needs to build his confidence up, and try and improve on the flaws in his game that Ruiz exposed.

Dumping trainer Rob McCracken would be a good move on Joshua’s part, because he needs a trainer that can work with him that can help him with his poor chin and stamina problems. Joshua doesn’t appear to be improving with McCracken, so he should look to get new blood in their that can help him learn to protect his weak chin, and help slow the pace down in his fights, because he can’t handle fast paces without gassing.

“I think he’s a broken man. At least Frank Bruno got KOd by Tyson, he’s worse than Bruno,” said Deontay Wilder to 78SPORTSTV. “He’s broken man. [Boxing is] 96% mental, and 4% physical. I’m not upset about the money. The most thing I’m upset about is he quit! He quit! When I’m in the ring, I don’t mean good for nobody. You’re going to have to kill me in the ring. He ain’t been talking. His promoter [Eddie Hearn] has been talking. He can’t fight for him,” said Wilder.

Technically, Joshua didn’t quit in the seventh round. I mean, Joshua was standing with his arms on the side of the ropes, smiling at the referee when he was asking him if he wanted to continue. It looked like Joshua was being held up by the ropes. His legs were gone after he was knocked down for the second time in the seventh round by Ruiz. You can’t blame Joshua for not wanting to continue, because he was going to rifled by Ruiz if he had continued fighting. Ruiz was attacking him in a two-fisted manner, hitting him repeatedly with both hands. Ruiz was throwing shots that would be considered fast even for a light heavyweight. The speed was impressive, and the power was more than adequate to hurt Joshua each Ruiz landed.

“The worse thing you can do is. quit. He was under so much pressure worrying about me,” said Wilder. “He was not mentally strong. He was created. I’m upset not because he lost, but because he quit. [Wladimir] Klitschko was supposed to have beaten him a long time ago. Dillian Whyte, if he had done what he was supposed to do, he would have saved us all the hassle,” said Wilder.

Wilder seemed to be enjoying Joshua’s misfortune last Saturday night. There’s obviously bad blood between them due to the issues surrounding the two of them wanting to fight. Wilder didn’t like that he was being given flat fee offers initially for a fight with Joshua, and then later percentage splits that were less than what he wanted. Wilder said all along that Joshua wasn’t as good as boxing fans thought he was, but fans didn’t listen to him. Now that Joshua was exposed by Ruiz last Saturday night, Wilder is enjoying his downfall, even though the defeat hurts him as well. Had Joshua stayed unbeaten, the two of them would have made huge money in a unification fight in 2020.

Joshua and Wilder can still face each other

They can still face each other, but Joshua will likely need to beat Ruiz first before he can get to Wilder. Unfortunately, Joshua might not be capable of defeating Ruiz. This could be the end of the line for Joshua when he faces Ruiz in a second fight. Joshua is too proud and too rich for him to stick around in the sport if he can’t even beat a fighter like Ruiz. Wilder might lose to Ruiz as well, but he would have a better chance of winning, because he’s got one-punch power, fast hands, and he’s good at fighting at range. Ruiz would have a harder time trying to walk down Wilder than he did against Joshua.