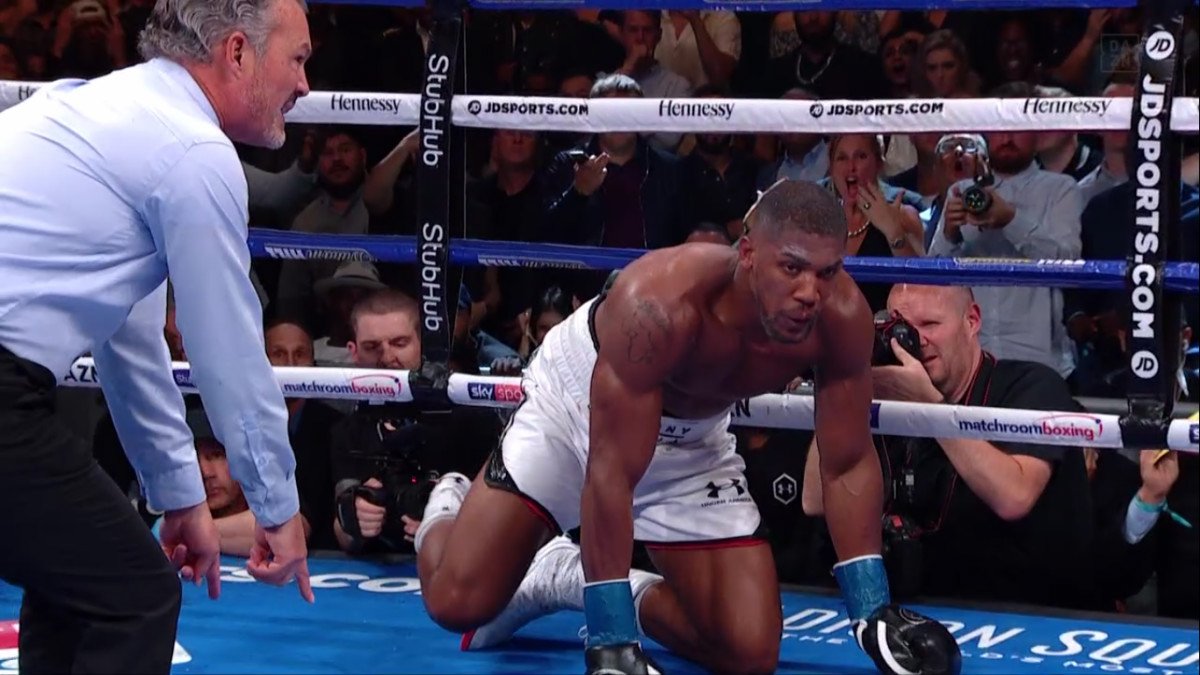 IBF/WBA/WBO heavyweight champion Anthony Joshua (22-1, 21 KOs) was shockingly stopped by unheralded replacement opponent Andy Ruiz Jr. (33-1, 22 KOs) in the seventh round in an upset on Saturday night on DAZN at Madison Square Garden in New York.

This was supposed to be the highly popular British heavyweight Joshua’s U.S debut, and he was expected to win with flying colors over the 29-year-old Ruiz Jr. Joshua’s promoter Eddie Hearn selected Ruiz Jr. from

It was a strange fight. Joshua looked like he was on his way to a fast knockout victory when he knocked Ruiz Jr. flat with a hard left hook in the third. Ruiz Jr. got up and was clearly still buzzed. The knockdown energized Ruiz, making him forget his fear completely. Ruiz Jr. came barreling forward after getting up, and he unleashed some fast combinations that caught Joshua and hurt him.

There was a left hook that Ruiz Jr. connected with that did most damage. Joshua was attempting to throw a left hand of his own, and he got caught by the left hand from Ruiz Jr. and wobbled. Ruiz Jr. was like a shark that smelled blood in the water, as he went after Joshua immediately after hurting him, and dropped him hard on the canvas. Sensing victory, Ruiz Jr. unloaded on Joshua with a series of hard shots that dropped him for the second time in the third round. Luckily for Joshua, the time ran out in the third round. If not for that, he likely would have been stopped, because his legs completely gone. Ruiz Jr. wasn’t going to stop knocking hi down.

Ruiz Jr. surprisingly took it easy on Joshua in round four through six. Ruiz Jr. was fighting cautiously instead of looking to finish off the hurt and tired Joshua. Ruiz Jr. was making the same mistake that Wladimir Klitschko made two years ago in his fight with Joshua. Wladimir knocked Joshua down in the sixth round, and he could have finished him in the seventh, eighth or ninth, but he decided it was better to box him. This enabled Joshua to recover from the knockdown, and come back to stop Wladimir in the 11th.

Ruiz Jr. didn’t let Joshua off the hook though. Ruiz Jr. waited until the seventh round before he unleashed a blizzard of punches that put Joshua down for the third time in the fight. What initiated the storm of shots from Ruiz Jr. was Joshua landed a hard left hook that shook him up a little. Ruiz Jr. looked like he got upset at Joshua after being hit by him, as he charged forward unloaded with some amazingly fast shots that Joshua had no way of blocking. There was too many of them. Joshua dropped to the canvas. Joshua got back up, but was dropped again by Ruiz Jr., who wasn’t going to let him off the hook. There was too much time in the round for him to finish Joshua.

After the knockdown, Joshua when to his corner and rested both arms on the sides of the ropes, as if he needed support to stay up. The referee then asked Joshua wanted to continue, and he didn’t answer at first. The referee then asked Joshua a second time if he wanted to continue, and he said, “Yes.” However, the referee didn’t like Joshua’s body language, so he halted the fight. Joshua looked shocked at the stoppage, but he couldn’t do anything. The referee had made a decision. It probably wouldn’t have mattered if the fight had been allowed to continue. Joshua was too hurt and tired to make it out of the seventh round.

The time of the stoppage was at 1:27 of round seven.

Joshua’s promoter Eddie Hearn said this after the fight about a rematch clause being in the contract:

“AJ got sloppy, got hurt and never recovered. Tonight belongs to Andy Ruiz Jr, we’ll make the rematch. AJ will rebuild, it’ll be a big rematch back in the UK, that’s a must-win fight.”

Hearn can say that again. If Joshua loses a second fight to Ruiz Jr., it’s pretty much game over as far as his career goes. The way Joshua fought tonight, he wouldn’t have lasted one round with World Boxing Council heavyweight champion Deontay Wilder. The speed and power of Wilder would be too much for Joshua, who looked muscle bound tonight. His weight wasn’t as high as it’s been in the past at 247, but he looked like he was too muscular for his own good. Joshua needs to trim off 30 pounds of muscle and get back down to the low 220s for him to be fast, agile and fit aerobically. 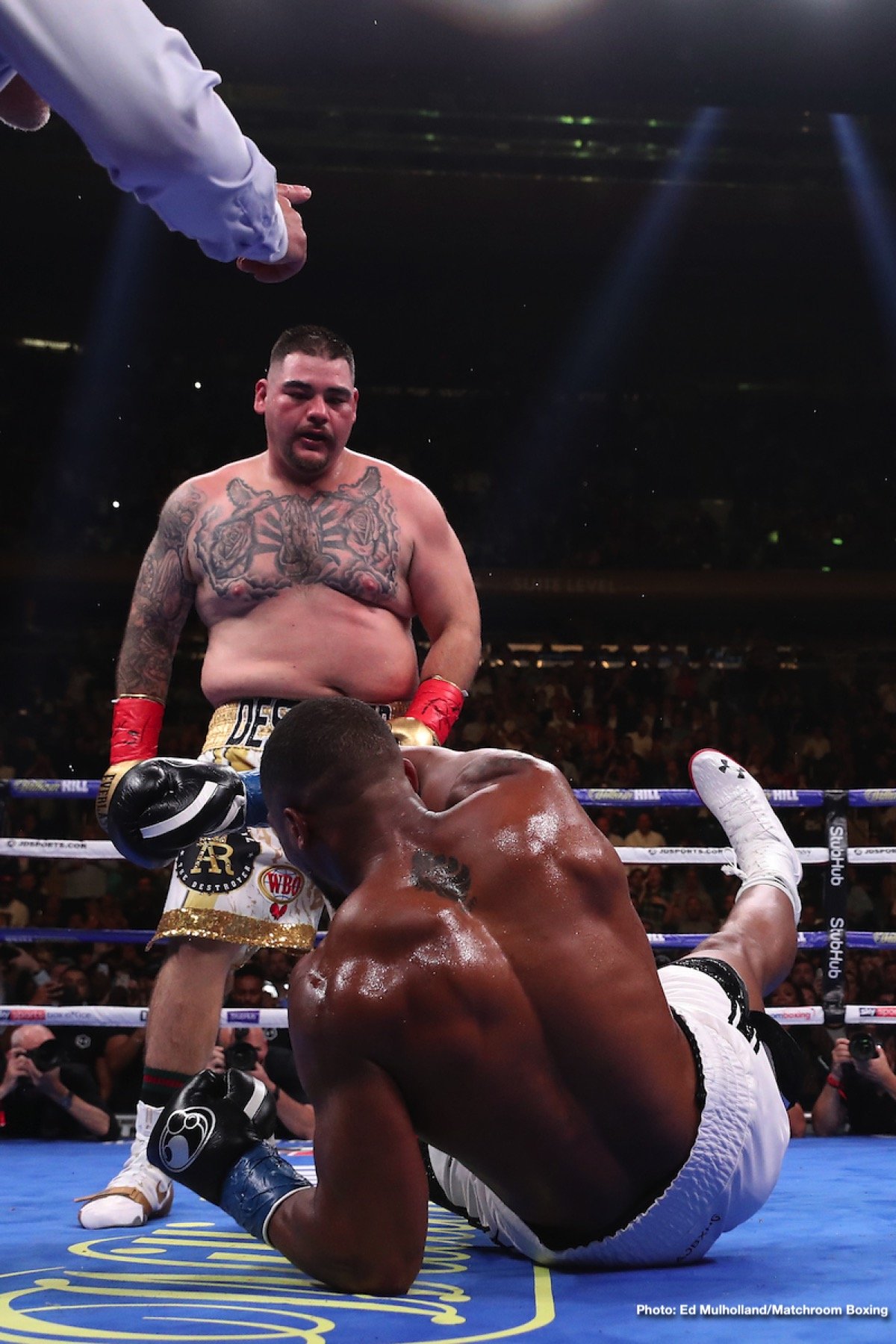