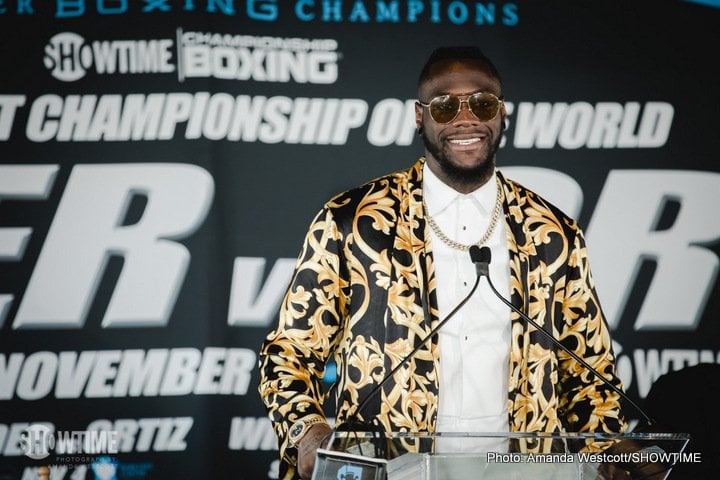 Deontay Wilder Vs. Luis Ortiz was officially announced yesterday in New York, silencing those remaining cynics who felt the fight was nothing more than talk and way too big a risk for Wilder. Now, as the WBC heavyweight champ said to the media, we can look forward to “one of the best heavyweight fights in a long time.”

Wilder, unbeaten at 38-0(37) will be taking the biggest risk of his entire career against Cuban southpaw Ortiz, unbeaten at 27-0(23) yet he says knocking Ortiz out will be the start of his campaign to unify the division.

“I’ve been waiting for this moment for a long time and I’m excited that the time has come to meet Luis Ortiz,” Wilder said. “Ortiz is considered the ‘boogeyman’ of the sport and I am the hardest hitter in boxing. When you put us in a ring together you will get one of the best heavyweight fights in a long time. I will unify the division. This I promise. This is the first step towards unifying. Any heavyweight that gets in my way is getting knocked out.”

So can Wilder achieve both goals – that of stopping Ortiz and then of unifying the belts? If he can take care of phase-one, then Wilder will be in a great position and the clamour for he and WBA/IBF champ Anthony Joshua to meet will be enormous. This one would be a genuine heavyweight super fight; arguably the biggest since the glory days of Tyson, Holyfield, Lewis and Bowe. But first things first, and Wilder has a tough test ahead of him on November 4.

Ortiz, though ageing, is experienced, strong, awkward and powerful. It’s time to see how well Wilder’s big guns serve him against a genuine top-5 heavyweight contender. This is the hardest opponent Wilder has fought since Bermane Stiverne who he decisioned to win the WBC belt back in January of 2015. Will Wilder land his bombs on the older, slower man, or will Ortiz find massive holes in Wilder’s defence?

This one can’t come round fast enough.