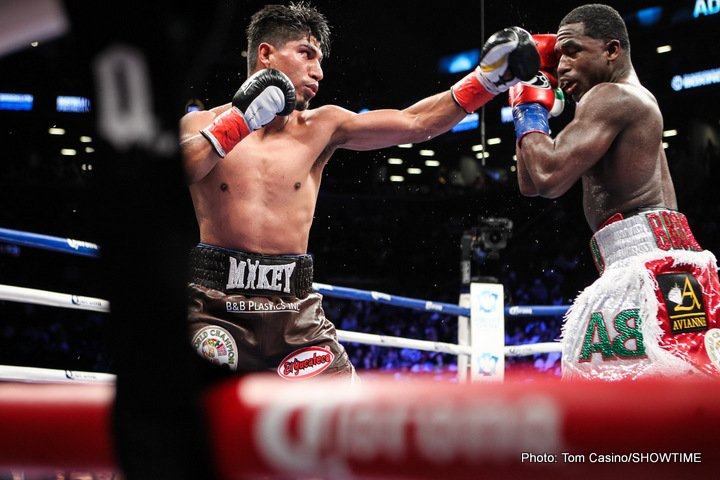 Miguel Cotto has made two things clear: he will not fight beyond December of this year, his retirement plans being absolutely final, and he wants to go out with, as he says it, “a bang.” The target the Puerto Rican great had in mind before last Saturday night was the winner between Gennady Golovkin and Canelo Alvarez.

As we all know there was no winner at the conclusion of the most heavily hyped middleweight showdown in years, so Cotto seems to be out of luck with regards to his facing either warrior (who are almost certain to box a rematch, perhaps next May.) But Cotto has just been given another very interesting retirement fight possibility courtesy of lightweight ruler Mikey Garcia.

Speaking with The Los Angeles Times, Garcia, 37-0(30) and coming off a wide decision win over Adrien Broner at 140 pounds, said he would be willing to move up to 154 to face Cotto in December.

“I would really go to 154 [in December] for Cotto,” Garcia told The L A Times via text. “I might be hot enough for the [Cotto] fight.”

Eric Gomez of Golden Boy is also interested in the possible fight, telling the newspaper as much:

“I’ve seen what Mikey has said and would like to know more,” Gomez said. “Mikey knows how to contact me.”

TV issues aside – Cotto fights on HBO, Garcia on Showtime – there is the weight factor to be considered. Garcia is without doubt a great fighter, but could he really go all the way up to 154 and be competitive? Is Cotto, on the other hand, dead-set on fighting as a middleweight in his career finale? We’ve seen other, crazier catch-weight fights take place quite recently, but a fight between a man who won his first world title down at featherweight against a reigning super-welterweight champion who won his first world title as a super-lightweight? Is this such a great idea?

If a deal cannot be made, Gomez says Cotto will likely target middleweight puncher David Lemieux. Who would you prefer to see Cotto fight: Garcia or Lemieux?