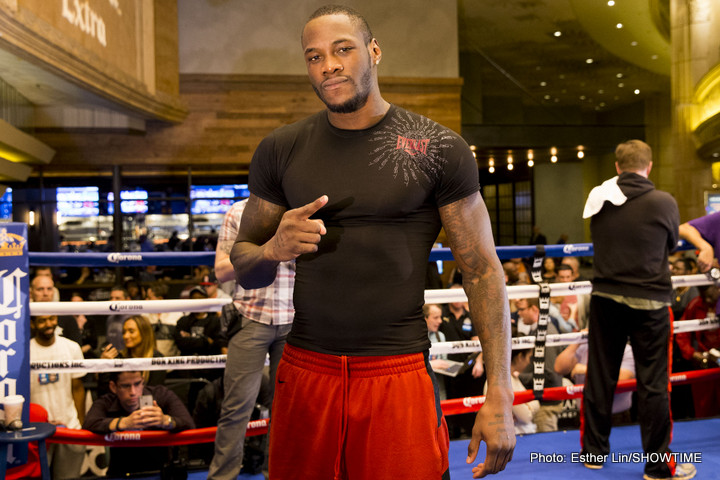 I like Deontay Wilder (33-0, 32ko), lets just say that before I go any further with this article – but I am firmly in an underwhelmed majority, who are quietly sniggering at his choice of opponent for the maiden defence of his WBC heavyweight title – the unheralded and decidedly NOT world-class Eric Molina (23-2, 17ko)

I think it’s fair to say this isn’t the most fantastic use of Wilder’s voluntary defence, but honestly – for a world champ who only knocked over part-timers and mis-matched pros before fighting Stiverne and winning his title, what did we really expect?

Joshua flattened Raphael Zumbano Love in his last fight on Saturday without breaking a sweat.

Eric Molina took 8 rounds to stop him in his last fight in January!

Hearn tweeted to say that Jason Gavern was Deontay’s fight before Stiverne and that it was his 32nd bout. He won that after Gavern retired at the end of the 4th.

Anthony Joshua, in just his 11th pro fight – not only floored Gavern more times than Wilder, he actually knocked him out – not just RTD him – and he did it a round earlier.

Credibility is not a word we can currently attribute to Deontay Wilder and it’s very unfair for American’s in particular to criticise British heavyweight’s Tyson Fury and Joshua, when their own future star of the division is fighting fights like this.

Even Kevin Johnson, who fights Anthony Joshua on the 30th of this month, is a better calibre opponent than Molina – who was knocked out by the solid, yet average Chris Arreola inside a round in 2012.

The fight with Johnson is only going to be Joshua’s 13th fight.

Fury will fight Wladimir Klitschko later in the year, enforcing his WBO mandatory status, and even if he loses as most expect – he will have extended himself further than Deontay has done thus far in his career.

I’m sorry but this fight is another joke from Wilder and exactly why I was so cautious of jumping on board the hype train after the career best Stiverne win. I was more impressed with Deontay, but not totally sold.

I’m 100% convinced Tyson Fury is a better technical boxer, as the big man has displayed very effectively in recent fights against Dereck Chisora and Christian Hammer – switch hitting, displaying good footwork and movement, while working well at range and on the inside when needed.

It’s such a shame that a fight between the two of THEM wasn’t next up for the fans. In terms of levels – they are pretty evenly matched and would have made for a great build-up! With Wilder’s power and Fury’s skillset/questionable chin – it would – and hopefully still will be – a great fight.

I’m also convinced Anthony Joshua carries the same degree of power as Wilder – if not more. The first guy who went in front of Deontay who wasn’t a tomato can (B-Ware) took him the distance. I’d say Joshua has more skill and potential as a boxer too and will soon grow into himself as the tests increase. We shall see how his own knockout run continues as the levels increase – though at least they are finally starting to.

Wilder is prone to being quite flat footed and throws like chicken-legged windmill at times. Particularly if he can sniff a finish. The technique is so awful when he’s swinging wildly I was surprised Stiverne didn’t chin-check him with a counter hook when he was backed up on the ropes.

Perhaps the Haiti-born Canadian’s claims to be suffering from severe dehydration really did affect his performance in the fight?

It’s worth noting Deontay obviously didn’t fancy using his voluntary defence to give Stiverne a shot at winning his belt back if he really was not 100% back in January….(Or Al Haymon didn’t – we know how he does like to protect his fighters after all!)

I’ll leave it there because I don’t want this to sound like an anti-Wilder piece because I like the guy. Yet the fact remains he’s had just one decent name on his record.

Even Tyson Fury can boast better quality in Chisora, Steve Cunningham and Johnson on his own slate.

If we give Deontay a freebie on this one, then we will be looking at sterner tests for the future. On the face of it, the winner of the Alexander Povetkin/Mike Perez fight on the 22nd becomes his mandatory challenger and next fight.

Unless of course Al Haymon pays some “step-aside” money to allow another lower ranked fighter in first!!!

Either way I want to see much more from Deontay Wilder than this. Just because he has a portion of the heavyweight championship of the world, it doesn’t mean he can play cherry-picker with such a prestigious title around his waist.