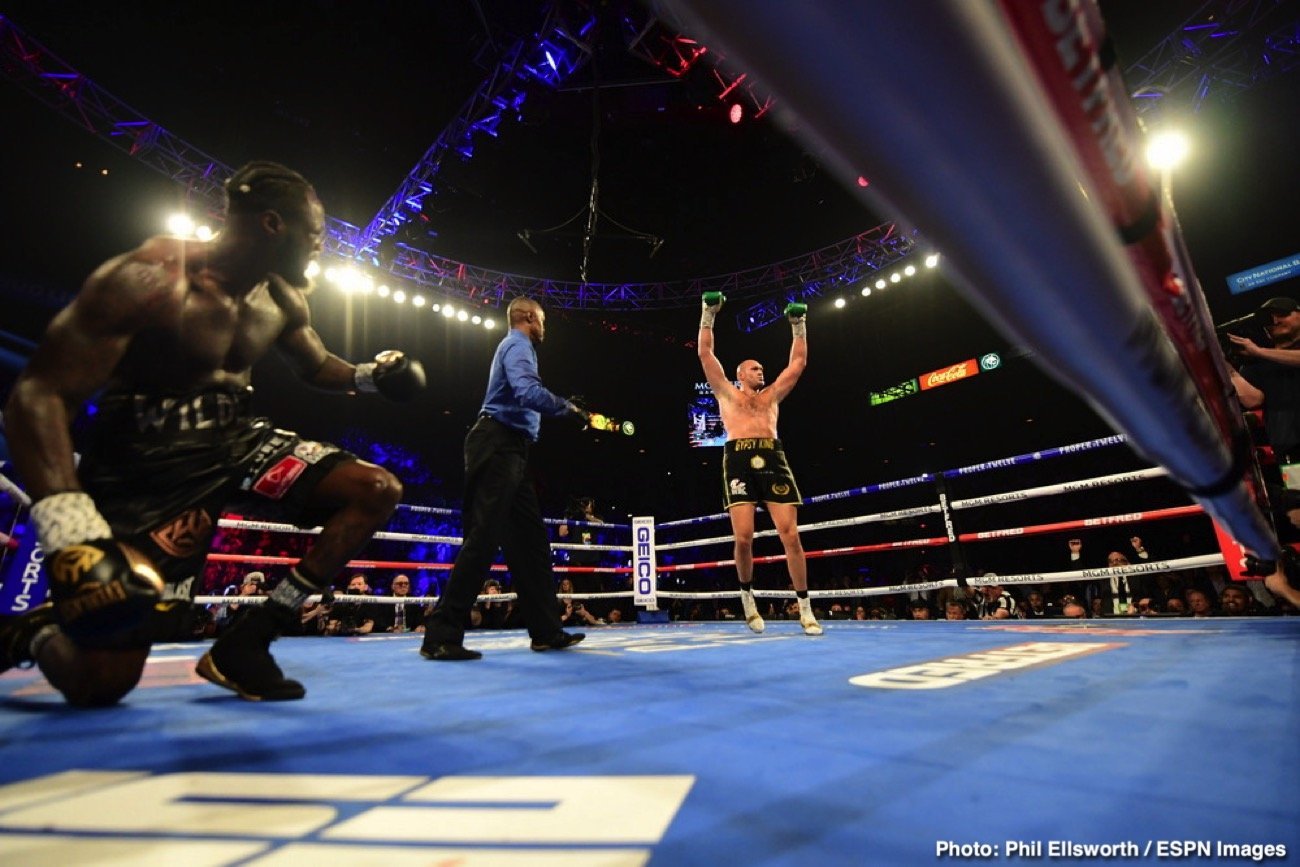 Deontay Wilder didn’t sustain a broken eardrum last Saturday in his loss to Tyson Fury as many people originally thought. The former WBC heavyweight champion Wilder (42-1-1, 41 KOs) merely suffered a cut inside his ear, which required stitches to close, according to ESPN.

The cut inside Wilder’s ear was repaired in the dressing room following his 7th round stoppage loss to lineal heavyweight champion Fury (30-0-1, 21 KOs) at the MGM Grand Arena in Las Vegas, Nevada.

The likely explanation for why Wilder’s balance was off during the fight last night was the fact that he was hurt after being knocked down by Fury in round 3. After that knockdown, Wilder went haywire from that point on. If Wilder suffered a concussion in round 3, that would explain why his balance disappeared.

Wilder opted not to attend the post-fight news conference last night. He might not have been in the best spirits to answer questions from the boxing media about what went wrong for him during the fight. Fury knocked Wilder down twice in the fight and had controlled virtually every minute of the contest before his trainer Mark Breland threw in the towel in the 7th.

“He looked incredible tonight. I liked him to out-box him, but not like that,” said UFC president Dana White to IFL TV on Fury’s performance against Wilder. “He absolutely dominated him the entire time, and he had power tonight. He hurt him with every shot, and he looked incredible. He did,” said White about Fury shocking fans.

“I didn’t believe it either. I bet on Fury tonight. I thought he would win, and outbox Wilder. I didn’t think he would [stop him]. I had rounds 9, 10, 11 and 12 for a knockout, and we were close. He’s [Wilder] as tough as tough can be, broken eardrum, and kept fighting, and was mad that the corner stopped it. It was a great fight,” said White.

It was strange to see Wilder being hurt by Fury given that the 6’9″ British heavyweight doesn’t have a reputation for being a big puncher. The weight that Fury came into the fight may have helped his punching power. He weighed in at 273lbs, which was the third-highest of Fury’s pro career. In Fury’s two previous fights in which he scaled over 270, he produced knockouts and looked strong.

“Devastating perfect performance,” said trainer Andy Lee to IFL TV on Fury’s win over Wilder. “That’s what we do [train fighters to knock guys out]. He had a great game plan and he executed it perfectly,” Lee said about Fury. “Keep pressure on Wilder, but educated pressure where whenever he would try to step back, we’d take a quick step back and straight back to him.

“Just keep breaking him down mentally. After the third round,” said Lee when asked when he realized Fury was going to win. “He took those two right hands in the first round and took them like they were nothing. I think that broke Wilder’s heart slightly. And when Tyson began pressing, pressing and pressing, and wearing him down physically, it was a great performance.

“Eventually was with the towel coming in, but the referee was about to step in at any moment,” said Lee about Wilder being pulled out of the fight by trainer Mark Breland in round 7.

Wilder looked so bad in the fight, it’s difficult to say for certain that Fury would be able to do the same things against a more polished fighter like Anthony Joshua. There were no adjustments made by Wilder in the fight to handle the things that Fury was doing, and he looked lost out there. Joshua or even someone like Dillian Whyte would come at Fury a completely different way.

“It was a systematic breakdown, wasn’t it? I think it was great. I told you seven. We worked very hard,” said Lee about him and trainer Sugar Hill in training Fury. “One thing about Tyson, he’s very teachable, but he’s determined to learn. That’s all it’s been is work. What we did today was no different from what we’ve been doing in the gym every day.

“I think so. He has to, doesn’t he?” said Lee when asked if Wilder will take the third fight with Fury. “But Tyson is still on the ascent, he’s only going to improve. He’s not even peaked yet with 8 weeks with me and Sugar. Imagine if he had six months. What are you going to see? You’re going to see a 6’9″ man of the sweet science,” said Lee.