Oscar De La Hoya says he wants to have the WBC force #4 Keith ‘One Time’ Thurman to face #1 Vergil Ortiz Jr. to get in a position to challenge for the welterweight title.

Ortiz (18-0, 18 KOs) is fighting next month against Michael McKinson (21-0, 2 KOs) in the headliner on DAZN at the University of Southern California’s Galen Center in Los Angeles.

If the 23-year-old Ortiz wins that fight, De La Hoya says he hopes to make a fight between him and former WBA/WBC welterweight champion ‘One Time’ Thurman (30-1, 22 KOs).

It’s predictable that Thurman, 33, and PBC will resist the idea of making a fight against the hard-hitting Vergil Jr. Unlike Mario Barrios, Ortiz Jr. can punch, and is a vicious body puncher.

As we’ve seen repeatedly during Thurman’s career, he can’t take it to the body. Thurman won’t willingly agree to fight a dangerous guy like Ortiz because it would wreck his dream of a big money fight against Errol Spence Jr, which he’s chasing.

You can argue the only reason Thurman came back is to get a massive payday fight against Spence. Vergil would potentially ruin Thurman’s dream, and he’s not going to allow that to happen.

If not Thurman, De La Hoya would like to match Ortiz against Kell Brook or WBO 147lb champion Terence Crawford. It all depends on how well Ortiz performs against McKinson. If Ortiz looks exceptional, De La Hoya will step him up against the top guys.

“Yeah, we’ll see on March 19th, depending on the outcome, depending on how he looks, we’ll be knocking on everybody’s door, including Crawford and Spence,” said Oscar De La Hoya to Fight Hub TV when asked about the timeline for Vergil Ortiz Jr. to challenge for a world title.

“The one thing we have to do with Vergil Ortiz is we have to force him down everybody’s throat because I know a lot of fighters are not going to want to fight him,” said De La Hoya.

“The WBC is a little complicated sometimes, to say the least,” said Oscar. “You have to fight an eliminator after eliminator, this and that. I don’t mind fighting Keith Thurman and forcing that fight to happen.

“I know Keith Thurman is a fighter, he’s a warrior. He’ll do the fight, but will his handlers allow him to do the fight? That’s the question. If the WBC can order the fight, we’ll obviously take it in a heartbeat,” said De La Hoya.

“I think it would be a good fight. Kell Brook is an entertaining fighter, he’s an explosive fighter. I like watching him fight, so why not?” said Ortiz when asked about the possibility of facing Kell Brook next. 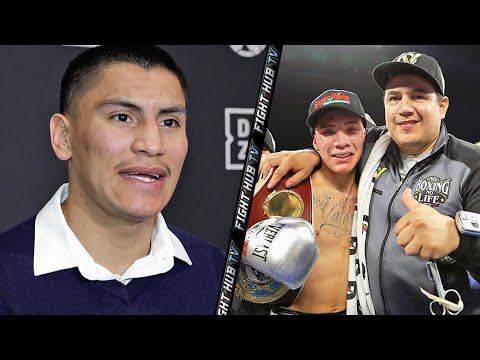