Oscar De La Hoya has made it clear he feels it was a big mistake for his former charge, Canelo Alvarez, to fight Dmitry Bivol. De La Hoya has laid into Eddie Hearn more than once for “making” the Canelo-Bivol fight (in truth, Canelo fights who he wants and he fights when he wants, with Hearn saying as much), and now Oscar is telling us that if Canelo fights Bivol again, “it’ll be worse.” As in it will be worse for Canelo.

Speaking with the media during this, fight week for the bad blood fight between Ryan Garcia and Javier Fortuna, De La Hoya said Canelo is “too flat-footed” for Bivol, adding how Canelo’s slow feet saw him lose to Floyd Mayweather also. 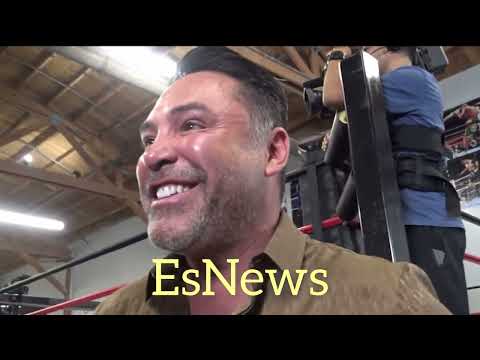 “If Canelo fights Bivol again, it’ll be worse. That’s the bottom line – styles make fights,” De La Hoya said, as filmed by ESNews. “Unless Canelo changes trainers, unless he changes trainer and he gets better, with his footwork – I think Canelo’s too flat-footed for somebody like Bivol, who uses his head and his intelligence – because if you look at Canelo’s losses, which are with Mayweather and Bivol, he lost because of his footwork. He lost because of the other guys being light on their feet and him being too heavy on his feet.”

Interesting stuff from De La Hoya. Canelo seems highly unlikely to part ways with trainer Eddy Reynoso, and is there really any reason he should? Can Canelo possibly “get better” with a new trainer? At age 32, it seems unlikely. But Oscar is perhaps on to something when he brings up Canelo’s footwork. Canelo is not fast on his feet and he never has been, and maybe Bivol was simply too quick on his own feet for the Mexican star, and will be again if they fight again.

But right now, Bivol seems to be heading into a fight with Gilberto Ramirez instead, this being a fight De La Hoya likes, stating how “Zurdo” can “get revenge for Mexico” in beating Bivol. Where a Ramirez win would leave Canelo, who is desperate to avenge his loss to the Russian fighter, remains to be seen.

But if Bivol and Canelo do hook up a second time, will it really “be worse” for Canelo? De La Hoya is of course bang-on correct when he says styles make fights. Maybe Bivol, along with being too big and too quick on his feet, is simply all wrong for Canelo style wise.