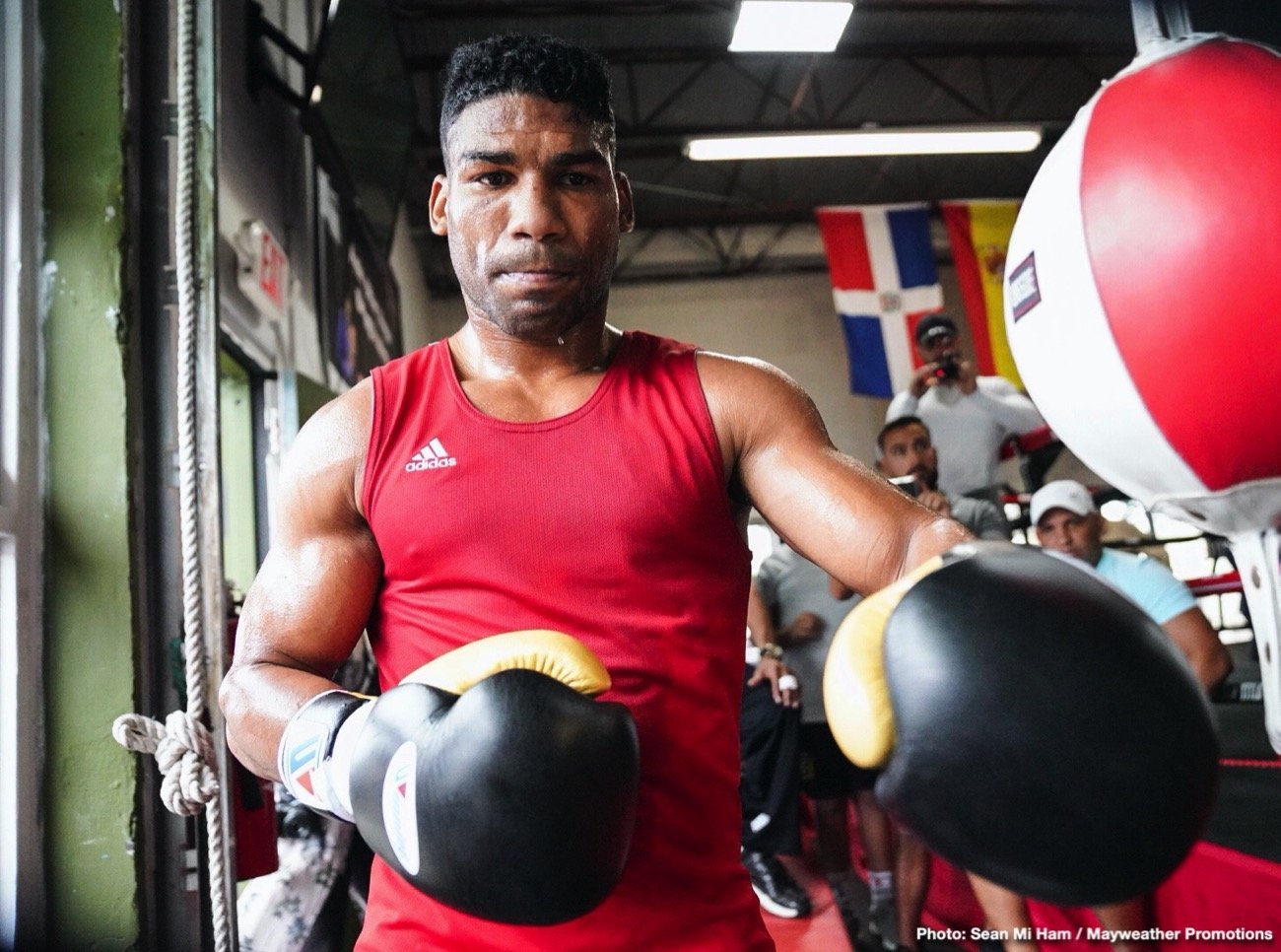 Yuriorkis Gamboa: I’m very happy to be on this conference call. I’m also very appreciative of the opportunity given to me. A little odd that I’m saying that, given that I’m the veteran coming into this fight, but I think everything’s lined up for me to have a big night on the 28th.

Q
This question is actually for Leonard and Stephen. You guys have been around a long time. Gervonta Davis, he refers to himself as the one, and he’s incredibly popular both in the ring and out of the ring, on social media.

S. Espinoza
Well, I’ll actually refer back to the early stages of Gamboa’s career as well, because I think you can draw a lot of parallels in their styles. What people love about Gamboa when he burst on the scene is the same thing as people love about “Tank” Davis, and that is their ferocious style inside the ring; the knockout power, the flashiness, the showmanship.

I think his story has resonated, his personality, and the struggle that he’s come from. And again, I will draw the parallel with Gamboa as well. What these two young men have overcome in their careers is the stuff of movies, and I speak not so much in their careers but in their lives, the obstacles that they’ve overcome, their journeys that they’ve been on.

You know, very different journeys. You know, one from Cuba, one from inner city Baltimore. But long and tough and difficult journeys to get to where they are now, in which they fought for it at every stage of the way, both in and out of the ring.

So I think the combination of that in and out of the ring is really what has built “Tank” to what he is, and I think, by drawing the parallel, it’s very similar to what established Gamboa as a star as well.

L. Ellerbe
Pretty much just to touch on what Stephen just said is that, when it comes to “Tank”, especially in the urban markets, which is carried over into other markets now, is that he represents what the fans like, this generation of fans want to see.

They want to see knockouts, and that’s what “Tank” believes in, and when he comes to the ring, his sole mentality is, “I’m not going to play with you. If you don’t belong in there with me.” With him, he’s going to run you out of that ring.

And the fans have gravitated to that style, and it’s a very entertaining style that they know, and it’s very reminiscent of the Mike Tyson era. And I’m not comparing the two fighters, but I’m just talking about what they both brought to the table.

That, when you came into the arena and you were coming to see a Mike Tyson or Gervonta Davis, you couldn’t get up out of your seat to go to the restroom or go get some popcorn and a drink, because the fight might be over.

And that’s what he brings to the table and he’s been able to cross over in markets now, where there’s other entertainers all over the world, just not African-Americans, all kinds of entertainers, actresses and actors. All have gravitated, and he’s the next guy up.

He has the it factor. It’s different, from a boxing standpoint, because we don’t see many stars in our sport that bring that to the table, and that’s what makes him very, very exciting and makes him the most exciting young star in the entire sport.

Q
Thanks very much. Stephen, just as another quick follow-up to what you were saying earlier, can you just talk about the star power of “Tank” Davis to have this fight and so close, in the midst of the holiday, with people traveling and there’s still so much interest generated with this fight, to hold this fight. What does it say about his star power?

S. Espinoza
Yes, going into a market that has been dormant for a long time is a challenge for a promoter, it’s a challenge for a fighter, and that’s why, quite honestly, you see this sport going back to the same cities because the safe and reliable thing is to go to where you know.

It is risky to launch or re-launch a market that has been quiet. You know, “Tank” very strongly believed that he could support an event and people would come out in Baltimore, and he was 150 percent correct. They came out far beyond what anyone expected, and a sell out in a great performance.

And on the shoulders of that, as a team, we and Mayweather Promotions had been looking for the right event to launch Atlanta again and bring that back to prominence, and you know, to say that, this young fighter is the one who’s going to reignite the market, that’s putting a lot of responsibility on your shoulders.

But I think, between his personality, his performance, and you know, the charisma and electricity that goes along with his events, this is proven already, when you look at the live gate, to be a wise decision to turn to Davis and Gamboa to re-launch and reignite that Atlanta market.

Q
Is this one of the best training camps of your career, and also what the death of his former trainer Jorge Hernandez means to him?

Y. Gamboa
Everyone knows what Mr. Hernandez meant to me. He was not only my trainer in Cuba, but he was like a second father figure to me, and his memory will always live with me. At the same time, I’m going to dedicate this fight to his memory and to his legacy.

My training has been excellent with the same trainer I’ve had who trained me for my last few bouts. We’ve done a great deal with increasing my workload, to increase the capacity of my workload on fight night.

Also learning a lot of new techniques and a lot of game planning has gone into this camp. I’ve learned to be a lot more cerebral because at the end of the day, the cerebral part of the fight is what’s going to take me to victory on the night of December 28.

Q
Do you feel like there is more motivation in this training camp compared to maybe some of your past fights, because it’s been so long since you fought for a title and just the overall magnitude of this fight?

Y. Gamboa
Definitely, both play a huge factor into what went into this training camp. We all know the significance of fighting for a world title, and at the same time, the magnitude of this fight in and of itself has contributed to the intensity of this training camp and the workload that we’ve had.

The work that went into this training camp was for me to regain and exceed the level that I was at when I was a reigning world champion.

Q
Did that win in July against Roman Martinez feel even sweeter than maybe some of your past wins because you still managed to show that you’ve got plenty of power even at this stage of your career?

Y. Gamboa
I think the work that was done and put into the camp against Roman Martinez and the results or the outcome of that bout clearly reflected the amount of work that I put into training camp.

Now I expanded and went above and beyond my last training camp in order to get to the level I need to, in order to come out victorious on December 28.
Q
What advantages do you believe you have over Gervonta Davis, heading into this fight?

Y. Gamboa
Obviously the nod has to go for me for experience, just because of the mere fact of my record and who I’ve faced. I definitely think I’ve faced the better opponents and the better quality of opponents than Gervonta has, with all due respect to him.

At the same time, the last fight that I had against Martinez, not only that but also against Beltran, goes to indicate that there’s a lot left for me to give in this sport. So, there are a lot of things that are being overlooked, and that I believe give me a definite advantage over Gervonta, come December 28.

Q
You made it very clear, after your co-main event in Baltimore that Gervonta Davis was the fight that you wanted. Why did you feel so strongly about that? Why were you so clear that he was the fighter you wanted?

Y. Gamboa
It’s a fight that was promised to me when I came into an agreement with PBC and it’s something that’s within the contract that if I was able to beat Martinez, Gervonta was on the horizon and I knew that if I did my part by beating Martinez in July that the next step would logically be Gervonta. So, that’s why I was so sure of it.

Q
How important is this fight for your legacy and for all of Cuban boxing?

Y. Gamboa
This fight definitely has some great significance to me, to be representing Cuban boxing and with what’s happened as of late, not only with Luis Ortiz but also in prior fights where, some of my compatriots did not come through, with exception of Yunier Dorticos. This fight represents not only a victory for me, but it also represents a victory for Cuba, and a victory for all my people if I do come out with a victory.

Y. Gamboa
I think it’s going to be a blend of both. I think there’s going to be good exchanges here and there throughout the rounds. But at the same time, I think we both carry a significant amount of intelligence into the ring, and I don’t expect anything less from Tank, and obviously not from myself.

L. Ellerbe
We expect a great fight come Saturday December 28, from Gamboa and his team. They’ll be very well-prepared. So, as we move on to Gervonta Davis, when you have a superstar fighter, it’s all about team.

And this next person, the next person I’d like to welcome onto the call, he’s been a tremendous part of Gervonta Davis’s team. He’s been a father figure, he’s been a mentor, and he’s been an outstanding trainer to not only Gervonta, but several other young men and young women in the Upton Gym. So without further ado, Calvin Ford, to say a few words.

I’ve been watching his work for a while. Just waiting for the fight to get here, so we can show our talent and what we do here at Upton Boxing in Baltimore.

L. Ellerbe
Thank you, Calvin. So, without further ado, the main event, the main attraction, two-time world champion, none other than Gervonta “Tank” Davis.