David Haney says Chris Eubank Jr can’t afford to overlook the threat that Liam Smith will bring to the ring this Saturday because this is a fight that he needs to be 100% to win. Eubank Jr’s remarks about only needing to be 50% worry Haye because he knows what Smith (32-3-1, 19 KOs) brings to the ring, and this isn’t the type of fighter that you can half-step it against and hope to win.

Haye points out that it took Canelo Alvarez to expose the flaws in Smith’s game, and that’s an elite guy. The other two losses that Smith suffered were close decisions against Jaime Munguia and Magomed Kurbanov in fights that could have gone either way.

Canelo beat Smith with a low work rate, using his perfectly placed body shots to drop him twice and stop him in the ninth round in September 2016.

That was Canelo when he was arguably in the prime of his career, and it was admirable that Smith could make it to the ninth round before he was done finished off by the Mexican superstar.

“This is the big one. I know people thought it was the [Conor] Benn fight, but this is a significantly tougher fight,” said David Haye to iFL TV about Saturday’s Chris Eubank Jr vs. Liam Smith fight in Manchester, England.

It is a tougher fight for Eubank Jr going up against Liam Smith than the unproven welterweight contender Conor Benn, who has never faced anyone remotely good enough to gauge whether he has any ability.

What you can say about Liam, though, is that he hasn’t been beating quality opposition at the world level. His wins have come against a ragtag mix of British domestic, European-level, and fringe world level guys with not much ability.

Smith’s best career wins have come against these lesser fighters:

“Smith is a legitimate former world champion. He’s here to win. I’m here to say to Chris,  ‘I know you said that you only need to be 50% to beat Smith, but he could be the boogeyman, he could be the banana skin.

“A lot of people are saying that Chris is going to cruise it. If he’s  100%, yeah, okay, but if we’re talking 50 to 60% [will do it]. Against Liam Williams last time, I don’t think that performance will be enough against Smith, I don’t think it would be. 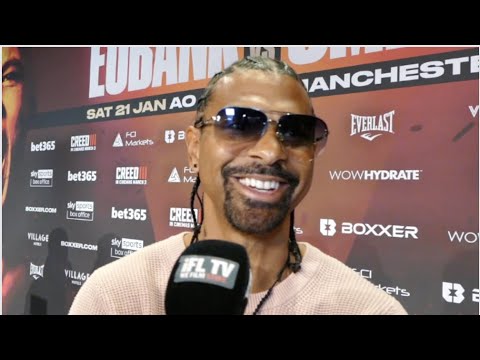 “I’m hoping that Roy and Ronnie has gotten more than 60% out in the gym because it was a little bit worrying hearing that.

“If he’s gay, I’m gay. He’s about as gay as I am,” said Haye when asked if Eubank Jr is gay. “It’s a bit of banter back & forth. I’m not sure what they’re trying. Maybe to get under Chris’ skin.

“I know he keeps his private life private. He likes to keep it that way. You hear that in years gone by, fighters who have been quite undercover with their movements. They get tarred, saying that they’re gay when they’re not.

“He wants to get his banter to try and rile the other guy, and I think they’re both too professional to let it get under their skin,” said Haye when told that Eubank Jr said that he’d heard that Liam Smith cheats on his wife.

“Hopefully, all the talking is done. Now it’s time to get in there an figure out who is the best. I know Chris is supremely confident.

“Liam’s style is really rock-solid. He doesn’t do anything that bad that you can pick big holes in his game. It’s taken someone as good as Canelo to expose them. That’s the only person that was able to expose him, but Canelo is there.

“If Chris can grind him down and stop him or stop him anyhow, that would be massive. It would show the world where he’s at. It would put him in that elite line,” said Haye.