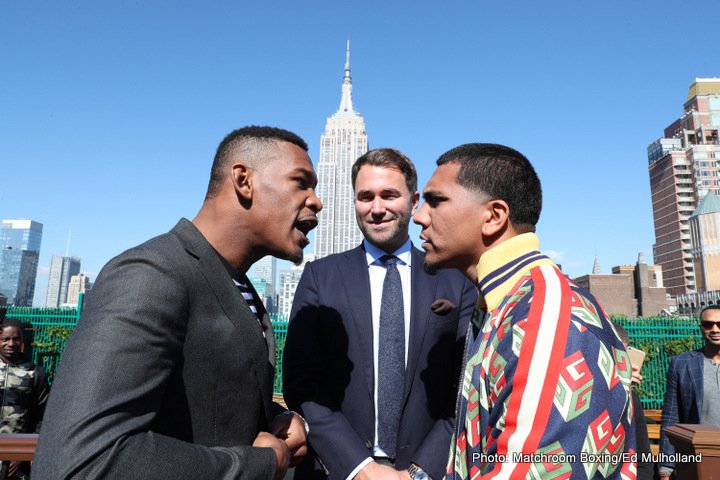 Former middleweight titlist Danny Jacobs enjoyed a winning debut under new promoter Eddie Hearn; and Hearn’s claim that “The Miracle Man” is the second or third best middleweight in the world was very possibly validated last night in New York.

Shutting out a game (he claims injured) Luis Arias over 12 one-sided rounds, Jacobs scored himself a fine win to close out the year. Now hungry to rule the world again (Jacobs holding the WBA belt from 2014 until his March defeat to Gennady Golovkin), the 30 year old says he will be travelling to Canada to watch the December 16 battle between WBO champ Billy Joe Saunders and challenger David Lemieux.

Jacobs is also optimistic about facing the winner of the in-the-works (but by no means definite) GGG-Canelo Alvarez rematch (pencilled in for next May) but that BJS-Lemieux winner seems a lot more likely. Jacobs showed his skills last night, if not devastating power. Would the stuff Jacobs showed last night be enough to beat either Saunders or Lemieux?

The December match-up is a great one all by itself, while the GGG-Canelo return aside, Jacobs against the winner is arguably the best world middleweight title fight that can be made next year. Jacobs has plenty to offer the division, of that there is no doubt.

Arias, who talked a great fight, said all along how Jacobs was “gonna run.” This was not in any way the case, as Jacobs could not resist pointing out on his official twitter page: “Never ran, never will. Case Closed. #TeamJacobs,” he wrote.

But will the winner of Saunders and Lemieux opt to run from Jacobs after he calls them out next month? Jacobs, now 33-2(29) said all along that boxing is “all about levels.” He was way above Arias; will he prove to be so against the BJS-Lemieux winner also? It will be entertaining finding out. If Lemieux wins next month (as is the pick here, for what it’s worth) and then agrees to meet Jacobs, the Canadian’s brutal punching power will likely see to it that Jacobs fights a totally different fight compared to last night’s relatively easy win.