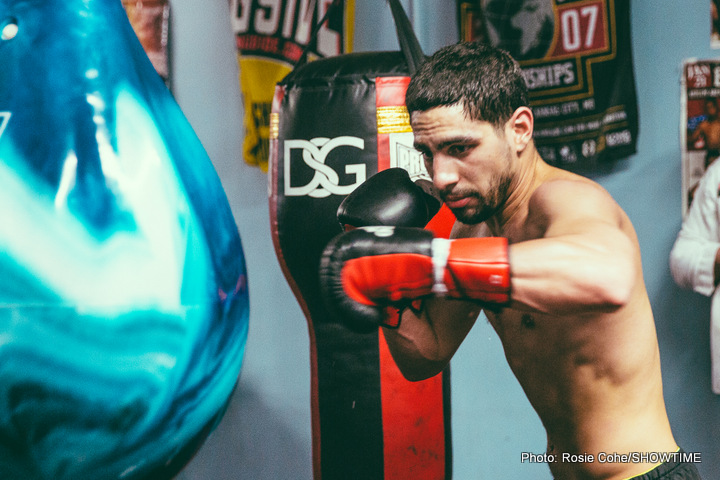 Philadelphia-native and two-division world champion Danny “Swift” Garcia has thrived in the underdog role several times throughout a career that has seen him defeat a slew of top champions. Just like Garcia triumphed over Amir Khan and Lucas Matthysse in two of his greatest wins, Garcia’s hometown Philadelphia Eagles will look to upset the odds this Sunday in Super Bowl LII against the New England Patriots.

“When you’re an underdog, it’s all about using that energy and that anger to show the doubters that you can do anything,” said Garcia. “You just have to have that absolute belief in yourself and you can win anything.”

For the fighter who still lives and trains in his hometown, just like so many sports fans in the area, the Eagles bringing home a Super Bowl victory would be the culmination of childhood dreams.

“I’ve been watching the Eagles since I was a little kid,” said Garcia. “When I was little I moved to a neighborhood where football was really important and that helped me fall in love with the sport.”

Garcia has represented his city throughout a career that has saw him win titles at super lightweight and welterweight, while defeating top fighters such as Khan, Matthysse, Lamont Peterson, Zab Judah, Robert Guerrero, Erik Morales and Paulie Malignaggi. Garcia fought in Philadelphia two fights ago when he delivered a knockout victory for his hometown fans at Liacouras Center at Temple University.

“There’s a toughness to Philly sports fans,” said Garcia. “‘Rocky’ helped mold that similar image of our people. I named my daughter Philly because it means so much to me to represent this city. Everything I do is for Philly. I’ve always dreamed about the Eagles winning the Super Bowl.”

Garcia hopes to be following up a Super Bowl victory for his hometown Philadelphia Eagles with a win of his own when he takes on former champion Brandon Rios in a welterweight world title eliminator Saturday, February 17 live on SHOWTIME from Mandalay Bay Events Center in Las Vegas.

“This is going to be a big month for Philadelphia,” said Garcia, “I think we’re going to beat New England 28-17. I still remember the first Super Bowl against New England like it was yesterday. That loss stuck with me and I know it has for the team and city too. This is our chance for payback.

“I can’t wait to see the Eagles win the Super Bowl and then I’m going to go out to Las Vegas in a couple of weeks, with Philly on my back, to beat Brandon Rios.”

Garcia vs. Rios headlines the SHOWTIME CHAMPIONSHIP BOXING telecast that also features the rematch between unbeaten super middleweight world champion David Benavidez and top-rated contender Ronald Gavril. Tickets for the live event, which is promoted by Mayweather Promotions and TGB Promotions, are on sale now and are available at AXS.com.