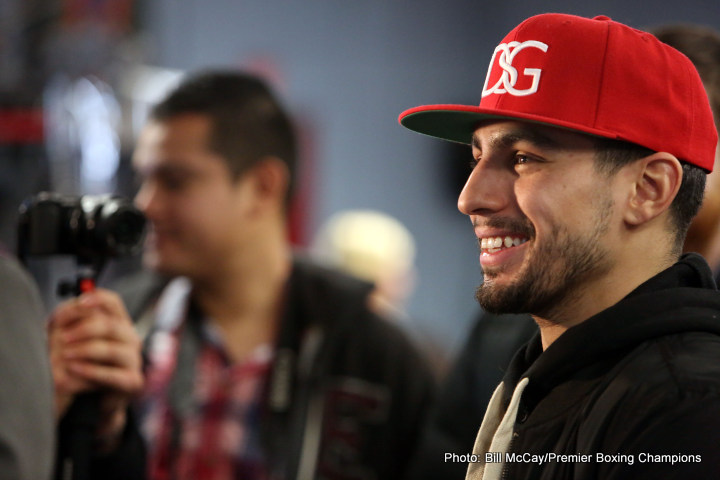 We’re constantly hearing rumours and suggestions regarding how superstar Floyd Mayweather Junior will fight again; how “Money” will come back to earn another big pile of money and also attempt to reach the milestone record of 50-0. And Danny Garcia, the man who now holds Mayweather’s old WBC welterweight crown, has heard all about how his name has oft been mentioned as a “likely” return foe for Mayweather.

Garcia, talking to Sky Sports, says he hasn’t been approached by anyone about the fight, but he made it clear he wants it. Garcia, who is mandated by the WBC to defend his title against former KO victim Amir Khan, wants to meet and defeat 39-year-old Mayweather.

“I’ve seen it in social media. But as far as me talking to anyone about fighting Floyd Mayweather? I didn’t hear about it yet – or it hasn’t reached me yet,” Garcia said. “But I want it. I am a great fighter, I believe in myself and mentally I think I will beat anyone who steps in the ring with me. It would be a dream come true and a fight I would love to see happen. There will be a new king in there and I am looking forward to getting in there and getting the job done. People are talking about me fighting Mayweather. I have been following him through my career and I feel I have the tools to go out there and dethrone him.”

Mayweather’s name has been in the press a lot lately, with the news mostly being devoted to his possible mega-match with MMA star Conor McGregor. This one looks like having next to no chance of happening, but there are many people who are convinced Mayweather will not be able to resist coming back – against another boxer. Can Floyd walk away for good at 49-0? Or will the desire to break the immortal Rocky Marciano’s record prove too much for the superstar who will celebrate his fortieth birthday next February?

If Floyd does come back and if it is against Garcia, the fight would obviously prove interesting. 28-year-old Garcia, unbeaten at 32-0(18) would likely need a career-best performance to be able to defeat Mayweather, who, before he “retired,” showed absolutely no signs of slowing down or of losing a step. Is Garcia good enough, or special enough, to do what 49 tried and failed to do before him? Of course, Garcia would hit the jackpot if he did get a chance to beat Mayweather in his 50th fight, and win or lose, he would walk away with a career-high payday.

If Mayweather comes back, he has a number of options to choose from as far as who his opponent might be. We’ve heard it could be Garcia, we’ve heard it might be Adrien Broner, and we’re still hearing McGregor’s name. The comeback doesn’t have to happen – many millions of fans will be quite fine if Floyd stays where he is – but if it does, Garcia is ready.