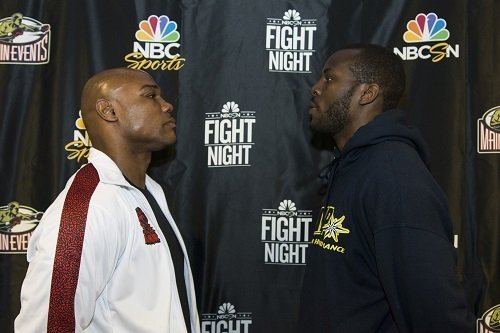 Philadelphia, PA: This afternoon at the Joe Hand Boxing Gym in Philadelphia, PA members of the media gathered for the kick-off press conference for the Friday, April 4th fight at the Liacouras Center in Philadelphia, PA between Steve “USS” Cunningham (26-6-0, 12 KOs) of Philadelphia, PA and Amir “Hardcore” Mansour (20-0-0, 15 KOs) of Wilmington, DE. The fight will be for the USBA Heavyweight Title and will be broadcast live on NBCSN Fight Night at 10:00 PM ET/ 7:00 PM PT.

Hall of Fame Matchmaker, J Russell Peltz has a long history of putting on great fights in Philadelphia. He said, “In this fight we have the bull and the matador. Here Mansour comes forward like a bull and Steve Cunningham is the matador. Both guys are from the neighborhood. Fights like this are what make Philly the great fight town it has been. Both fighters took a long road to get here. I am really pumped for this fight.”

Main Events’ CEO Kathy Duva said, “The heavyweight division is starting to get really, really interesting. I don’t think it is going to be so easy for Wladimir Klitschko to dominate. In the next three or four years there is going to be big changes in the division and both these gentlemen have a chance to be part of that change.”

Steve Cunningham’s trainer, Brother Naazim Richardson said, “When I looked at this matchup I wasn’t big on the Philly vs. Philly match-up but these two men’s styles are a great match-up. I don’t underestimate Mansour and his team at all. I realize this is the biggest fight of Mansour’s life. I am comfortable that Steve can compete at the world class level. It is going to be an outstanding card.”

Steve “USS” Cunningham said, “I have so much respect for Mansour. He is doing great things for himself. He’s got a belt I am trying to get a belt and gain position in the division; so is he. This is what happens in boxing. I am taking this very serious. I love proving people wrong, that motivates me. Tell me what I can’t do and I am going to do it. This has been a tough journey for me and my family. I got some heartbreaking news but training camp continues. I must perform in the ring and I won’t lay down for anybody. He knows it is going to be a fight from me and I know it is going to be a fight for him.”

A choked up Amir “Hardcore” Mansour said, “It is ironic for me to fight Steve Cunningham; I was flabbergasted when they told me. When I got home in 2010 Steve was the first person I saw. He was fighting a southpaw and needed a sparring partner. I was so happy that I performed well with a world champion after an eight and half year layoff and I was literally crying. This is just a great opportunity for me to take advantage of. I know what kind of heart he has and what he brings to the table. I won this title with the flu, dehydrated and sick. I really hurt myself winning this title and I am prepared to defend it.

“I am not willing to let anyone take it from me. Win, lose or draw we get to bring boxing back to Philadelphia. I am in great shape; I haven’t been in this great of shape since before the August fight. They don’t call me Hardcore for nothing. April fourth I got to do what I got to do. I never had a big fight opportunity and he has. This is my time. I know that I can make the adjustments that I need to make. There is a whole bag of tricks that I have up my sleeve. I am prepared to die before I lose in this ring. That is my mentality. Before I lose take me out on a stretcher. This is my time to shine. I am prepared for war. We are going to get it on.”