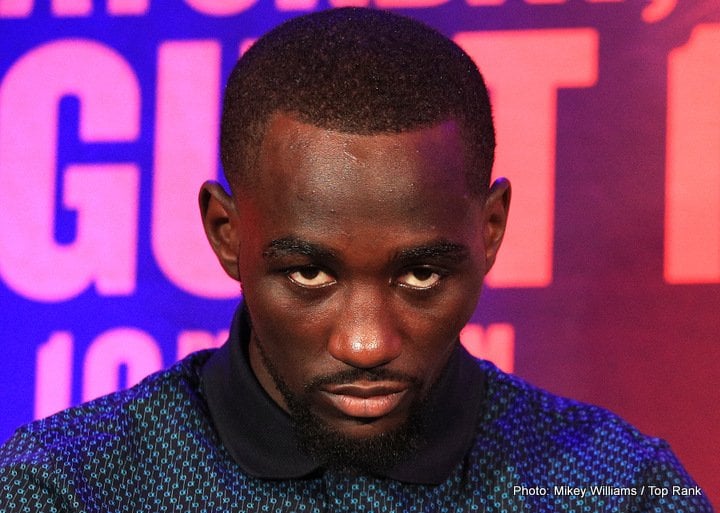 Terence Crawford will be getting a title shot against WBO heavyweight champion Jeff Horn in February or March of next year, says their promoter Bob Arum. The original plan was for Horn (17-0-1, 11 KOs) to defend his WBO 147 title against 38-year-old Manny Pacquiao in a rematch in November.

Pacquiao couldn’t take the fight because of his senatorial responsibilities in the Philippines. Pacquiao says he wants to fight Horn in 2018, but Arum has doubts whether that will happen. So instead of planning for the Horn vs. Pacquiao rematch, which may never happen, Arum is already targeting the Horn-Crawford fight in early 2018. Even if Pacquiao faces Horn and beats him, Arum will still look to have Crawford, 29, fight for the WBO welterweight title.

“He’ll be the mandatory contender for Jeff Horn. That’s what me and Terence were discussing,” said Arum to Talkbox via RingTV.com. ”His next fight will be in February or March and will be against Jeff Horn.”

Arum is pushing Crawford to try and turn him into a star in boxing. Pacquiao is on his way out of the sport after 22 years as a pro. His loss last July to Horn showed a dire picture of how much Pacquiao has lost from his game due to his advanced age and ring wear.

Yes, Pacquiao probably deserved the decision over Horn. Yes, Horn likely should have had multiple points taken off for the way he was head-butting and shoving Pacquiao around the ring. But the fact of the matter is, it should have been an easy fight for Pacquiao if he was still fighting at an elevated level. If you were to put Horn in with Errol Spence Jr. and Keith Thurman, he probably wouldn’t make it past the 6th round. Those guys would have unloaded on Horn with everything but the kitchen sink until he was taken out. Pacquiao couldn’t do that. His stamina wasn’t there, and he seemed to be only capable of using his left hand. His right hand was rarely used in the fight, which makes one wonder whether the shoulder surgery that Pacquiao had has left that arm now useless to him.

”He’s a wonderful young man and a tremendous, tremendous talent and I think, in the next five years or so, we’re going to see the era of Terence Crawford,” said Arum about Crawford.

Horn will be defending his WBO title against Gary Corcoran on December 15th/16th in Brisbane, Australia. This is a voluntary defense for Horn. Corcoran is ranked #11 WBO. Arum isn’t taking any chances with Horn by putting him in with a good fighter until he’s ready to hand the WBO belt over to Crawford in early 2018.