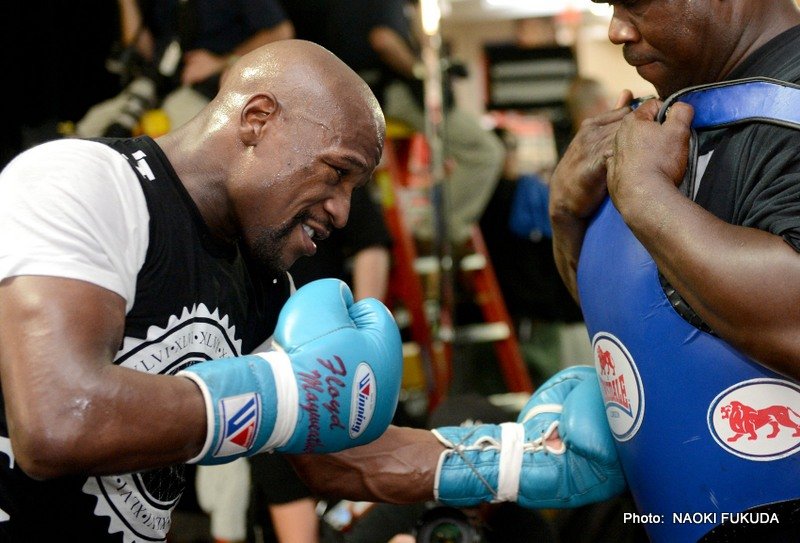 (Note: Countdown to Mayweather vs Maidana II is an EastSideBoxing exclusive by resident scribe Vivek “Vito” Wallace who will take provide a glimpse into the epic showdown each week on Sunday, with a final prediction/analysis piece to be published on the day of the fight).

In last weeks ‘Countdown to Mayweather vs Maidana II’, we took a look at Maidana’s fearless mission to unseat the best talent in the sport. As we get closer to this epic showdown, it would only be fitting to assess the opportunity for victory of the man across from him. Floyd Mayweather remains the most enigmatic force in the world of sports. Few unanswered questions in the present, no visible regrets of the past. Recent headlines surrounding him demonstrate nothing short of utter chaos, but if there’s ever been a place that serves as a sanctuary for the man they call ‘Money’, it can be found in the ring.

At age 37, facing the proverbial ‘west side’ of his career, Floyd Mayweather knows that the window of opportunity to secure his spot on the Mount Rushmore of boxing is quickly closing. Many legendary nights in the past helped him enter the discussion, but how well he finishes down the home stretch could very well tell the tale, as it relates to etching his name in that unprecedented stone.

The journey continues next Saturday night against a man he knows perhaps better than he’d like to. In their initial encounter, the rugged Marcos Maidana used a heavy workrate, unorthodox punching form, and sheer aggression to produce one of the more interesting nights of Mayweather’s career. Eager to remove all doubt, those closest to Mayweather feel the aging wonder turned in one of his most comprehensive training camps yet, and by the end of the night, could potentially net one of his “best performances” yet. Those are very big words to fill when you look at the trail of amazing performances of the past. And they make us wonder, what could he possibly show us that we haven’t seen of him?

Against Mosley, we saw him weather two very troubling moments as early as the 2nd round, only to dominate every one after. Against Cotto, we saw him sport a bloody nose and mouth on the heels of several thunderous shots, once again finding a way to overcome. Castillo and Hatton’s unrelenting pressure, Judah’s speed, Marquez’s ring IQ; each posed a different problem for Mayweather, yet in the end, each were overcome. Maidana would joint that cast by also confronting Mayweather with a new winkle. A well placed headbutt left blood streaming into Mayweather’s eye. Incredible poise, combined with the best cut-man in the game (Rafael Garcia) would finally stop the bleeding.

Eager to get it started again, Maidana will enter the ring this time with much better knowledge of what he needs to do and how he’ll need to do it. Showtime’s “All Access” showed the Garcia camp breaking down Mayweather’s every motion. Their plan? Fewer looping punches, an unceasing work rate, a more aggressive approach to cutting the ring off, and as many ‘dirty’ tactics as referee Kenny Bayless will allow. All good in theory, but haven’t we heard it all before? 45 men have tried, with the “toughest” amongst the group trying twice. Each in the past were met with the same result.That has no bearing on what will culminate on the night of September 13th in Las Vegas, but what it tells us is this:

Since he became Champion, everyone has targeted Floyd Mayweather. His victories and a growing animosity have continued to mount as that effort to unseat him as grown to a feverish pitch. With only 3 fights remaining, there’s never been a bigger push from critics, champions, and all between to see him finally fall. This blinding reality is why his work ethic is stronger than ever.

The ultimate irony is that he’s viewed as both the biggest party animal, as well as the biggest gym rat. An ability to outwork the competition while also out-playing serves as a perennial example of his unrelenting dedication to craft. Can he overcome such an obstacle at this stage of his career and give us another career defining moment next Saturday night? Questions raised will soon be questions answered. The history of others his age says no. His prolific history tells us maybe so. The only certainty here is that he will be tested, and anything less fails the test. Stay tuned.