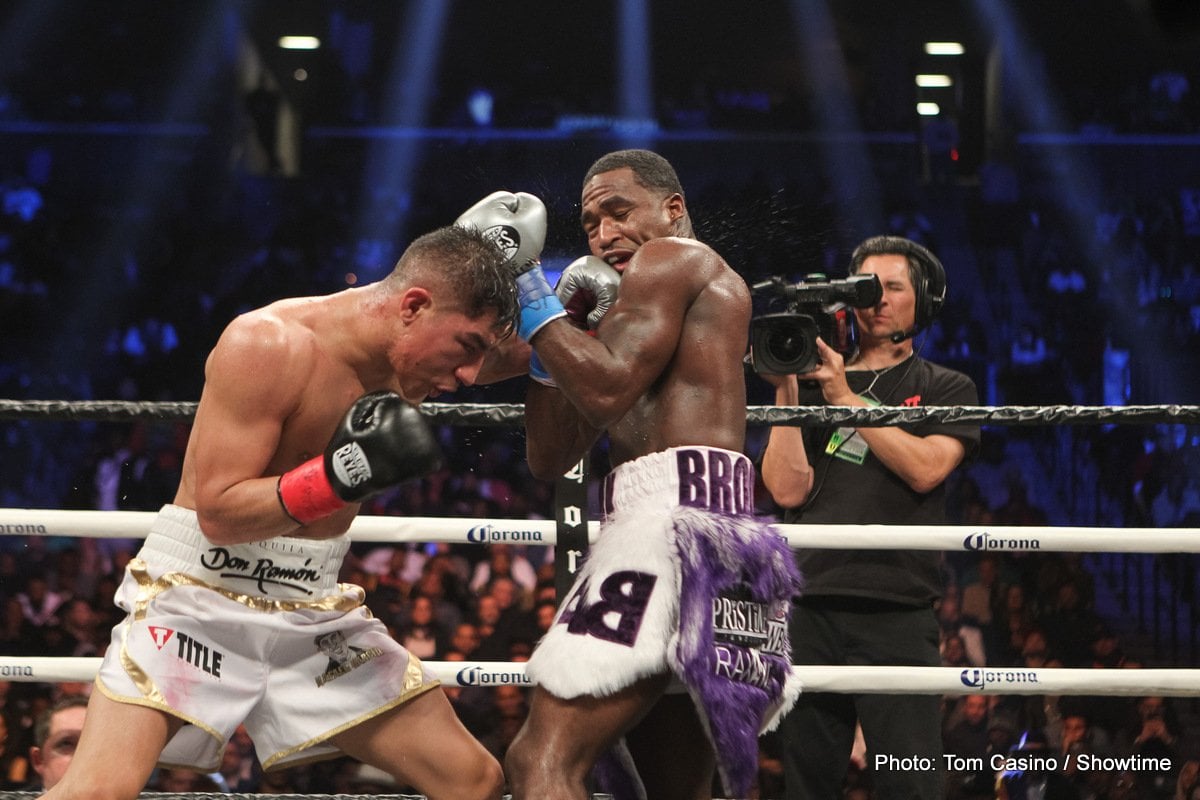 Benn, 24, is slowly working through the aging, faded fighters to eventually fight for a world title in a year or two.

The former four-division world champion Broner, 32, is the guy that Benn and his promoter Eddie Hearn believe would be ideal for him right now.

Hearn’s #1 choice for Benn’s next fight is Amir Khan, but that’s a pipe dream on his part. Khan isn’t going to entertain that fight unless Hearn throws crazy money at him, and even then, it’s questionable whether he’d agree to it.

Broner is obviously nowhere near the fighter he once was ten years ago when some viewed him as the eventual replacement for Floyd Mayweather Jr.. He’s still dangerous for the badly flawed Benn.

If Benn does take this fight, there’s a possibility he could get exposed worse than he was in his two matches against Cedrick Peynaud.

Last Saturday, Benn beat Adrian Granados (21-9-3, 15 KOs) by a wide 10 round unanimous decision on the Mauricio Lara vs. Josh Warrington card at the Headingley Arena in Leeds, England.

Despite winning by a set of lopsided scores, Benn wasn’t happy with his performance, as he had problems cutting off the ring on Granados, and he was frustrated at his inability to use his counter-punching the way he wanted to.

The reason for that is Granados was mostly jabbing, and Benn’s accuracy was inadequate to counter his jabs.

“Four-division champion, that would be some fight. I’d love to share the ring with Adrien Broner,” said Conor Benn to Boxing Social. “Abel Ramos, Josesito Lopez,  Algieri, and you got [Robert] Guerrero and [Victor] Ortiz.

“I’d do that [fight in Las Vegas] or sell out the O2 Arena. I’d love to bring this fight back home. Every one of them works. It would definitely be a massive show,” said Benn.

Adrien Broner is like an old landmine that has been buried under the ground and left years to rust. Even though that landmine is decaying, it’s still lethal if you step on it.

Broner might blow up on Benn if he takes this fight, and that would wreck all the money that he’s expected to bring in in the next five or six years. Benn is another example of a fighter taking advantage of having a famous dad.

We’ve seen it with Hector Camacho Jr and Julio Cesar Chavez Jr, who both stood on the shoulders of their famous fathers to make good money in boxing without doing anything significant.

Unfortunately, Conor hasn’t displayed anywhere near the same talent at 24 as Nigel, and his last fight against Granados showed that he’s not cut from the same cloth as him. Perhaps, Conor gook after his mother’s side of the family?

Whatever the case, he’s slower, smaller, weaker, and nowhere near as gifted as Nigel Benn was, and that doesn’t look like it’s going to change no matter how many older fighters are fed to him.

As long as Matchroom Boxing recognized the potential of Broner beating Benn and wrecking his career in the process, they should go ahead with this fight. I mean, they got to do something with Benn.

They obviously don’t want to put Benn in with Virgil Ortiz Jr, Jaron Ennis,  David Avanesyan, or Keith Thurman and watch him get beat.

Broner looked something awful in his last fight against light welterweight Jovanie Santiago last February, struggling to win a 12 round unanimous decision over the 31-year-old Puerto Rican fighter.

The difference between how Russell looked against Santiago and Broner looked was shocking, showing how faded Adrien is at this point in his career.

That’s obviously what Benn is counting on. He can’t afford to fight someone too good and wind up losing.

If Benn wanted to impress the boxing public, he’d fight Russell or, better yet, David Avanesyan, who has been calling him out night and day for months.

“It was an odd one because he was on his bike the whole time,” said Benn in reflecting about his fight last Saturday night against Adrian Granados.

“I’m a counter puncher, and I needed opportunities to counter, but he was just running so bad. I know the difference between boxing and running.

“I don’t think he knows the difference, and it was very frustrating. But we keep moving and roll with the punches. I done what I needed to be done.

“No one had won as convincingly as well when he fought Broner, Porter, and Easter,” said Benn in saying he did a better job against Granados than those fighters did.

“We tick off the boxes. Definitely, the rounds are so valuable, and I needed the rounds. Every time I do rounds, I show progress.  There were a lot of mistakes made,” Benn said.

Benn looked clueless against Granados when he was moving around the ring like he didn’t have the sense to understand the direction the Chicago native was going in to cut off the ring.

It was hard to watch how confused and lost Benn was and sad because he doesn’t have Nigel’s natural ability. Granados would have been food for a fighter like Nigel but not for his less gifted son, Conor.

Benn wanted Granados to be stationary

“I did try to cut the ring off, but he was just running so bad, and he wouldn’t engage,” said Benn on his struggles to try and cut off the ring on Granados.

“He would flick a jab out, and because he’s flicking it out of range, how can I counter that? I can’t counter that, a flick jab.

“The public came to see us have a good fight. That’s my frustration. Not because he’s moving. He can do what he wants.

“But the last ten seconds of the fight, I thought, ‘Mate, sort it out.’ It was stupid because what was he doing? What are you actually doing? You’re making yourself look silly.

“That’s my frustration is. I didn’t come here to have an easy 10 rounds, which is what it was.

“I didn’t come here to have easy rounds. I knew I was winning convincingly. It’s not what I expected. He kept dodging the right hands, lovely.

“I can’t fault him for that. I hit him hard the first second of the third round, and he was on his bike the whole time,” said Benn.

After the fight, Benn complained about Granados not being a stationary target for him, and he sounded helpless.

Benn wanted Granados to just stand there like a dummy and let him use his superior size and power to score a quick knockout.

Unfortunately, it doesn’t work that way when you’re fighting better opposition. The sooner Benn realizes that, the better it’ll be for him.