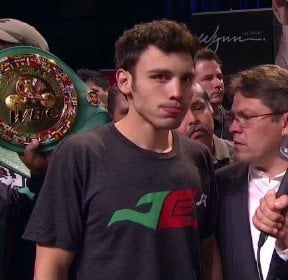 By Joseph Herron: In what most fight scribes are calling the most impactful 160 pound contest since “Trinidad vs. Hopkins, 2001”, Julio Cesar Chavez Jr. (46-0-1, 32 KOs) will be facing Sergio Martinez (49-2-2, 28 KOs) for the universally recognized Middleweight Championship on Saturday, September 15th, at the sold out Thomas & Mack Center in Las Vegas, Nevada.

While most boxing experts and fight scribes were dubbing this superb match-up as a pick-em fight just two short months ago, the estimated probability has dramatically shifted to favor the lineal Middleweight king, “Maravilla” Martinez.

For weeks, rumors have swirled in and around Vegas concerning Junior’s lackadaisical work ethic and relaxed training regimen in preparation for the most important fight of his young career. It was also rumored that elite level trainer Freddie Roach had to be convinced by Hall of Fame promoter Bob Arum to stay in Junior’s camp for the aforementioned reasons.

On the eve of the event, in the Encore Theater at Wynn Las Vegas, Junior looked not only sprightly when greeted by his legion of fans at the packed facility; he looked svelte when easily weighing in under the Middleweight limit. JCC Jr. registered at a slim 158 pounds, which is the lightest weight the young title holder has recorded before a prizefight since 2009.

Is the boxing world prematurely discounting the undefeated fighter too soon?

Many heavyweights within the boxing industry have decided to stick to their guns and re-enforce their original choice, stating that Chavez will eventually close the distance on his opponent to win the bout via late round stoppage.

Their reasoning is that Junior is very proficient in cutting off the ring effectively, while walking through his opponent’s best shots. Many trainers and fight aficionados also believe that Chavez is simply more effective on the inside than the pound for pound marksman. They believe once Chavez has closed the distance and has forced the fight on the inside, Sergio will have no answer for Junior’s hooks and uppercuts underneath.

But after shedding so much weight the day before the bout, will Chavez be able to implement an aggressive strategy? Will a depleted Junior be able to close the distance effectively?

While fighting in a massive 24 foot ring at the Thomas & Mack Center, will Chavez even elect to be the aggressor against the fleet footed Maravilla?

Although Antonio Margarito literally chased Martinez out of the ring twelve years ago in handing the current Middleweight Champion his first professional loss, the only fighters who have had reasonable success against Maravilla as of late were fighters who fought with a passive aggressive style that forced Martinez to take the lead.

Will we see a similar tactic from the undefeated WBC Champion?

Despite whatever tactic Junior chooses to adopt, he has shown his fans during the pre-fight festivities that he’s indeed ready for the main event and the long awaited showdown with Sergio Martinez.

Will we see a new lineal champion crowned in the Middleweight division, or will Maravilla justify his seat among boxing’s elite?

In what the great Larry Merchant has often characterized as “the theater of the unexpected”, anything can happen in boxing.