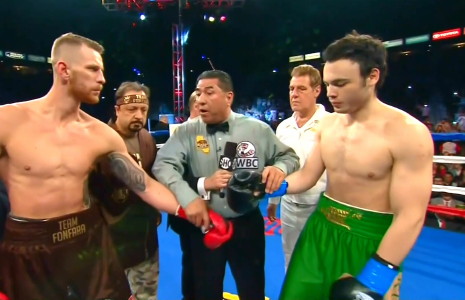 Julio Cesar Chavez Jr’s career took a major hit tonight with him getting stopped at the end of the 9th round by the big punching light heavyweight contender Andrzej Fonfara (27-3, 16 KOs) in their fight at the StubHub Center in Carson, California. Fighting at a catch-weight of 172 pounds, Chavez Jr. was shockingly dropped the 9th round by Fonfara. Chavez Jr. was really hurt to the extent that he wasn’t going to be able to recover after the round ended. In between rounds, Chavez Jr. quit on his stool instead of coming out for the 10th and taking more punishment.

Fonfara was deducted a point in the 7th for the use of his shoulder. It was kind of a petty foul to be called by the referee Jerry Cantu, but thankfully the point deduction didn’t have any effect on the result of the fight.

Chavez Jr. did not look good in the fight at all. He was getting nailed with big shots from Fonfara all fight long, and his own punches didn’t have any affect on Fonara. He was able to take them without any problems and come back and continue to punish Chavez Jr.

It was kind of strange seeing Chavez Jr. without a size advantage like fans have grown accustomed to seeing him have in his fights. Chavez Jr. had kind of built a career melting down to 160 and fighting smaller guys. He would make weight and then rehydrate up to where he looked like a small cruiserweight, and this helped him beat up on a lot of his opponents. But in choosing an actual light heavyweight instead of middleweight, Chavez Jr. was without a size advantage.

With this defeat, Chavez Jr. is likely to return to the super middleweight division and try to resurrect his career in this weight class. As bad as he looked tonight, I doubt that Chavez Jr. will be able to do much at this weight. The fighters at 168 are arguably more talented than many of the guys at 175 with the exception of Artur Beterbiev, Sergey Kovalev and Adonis Stevenson.