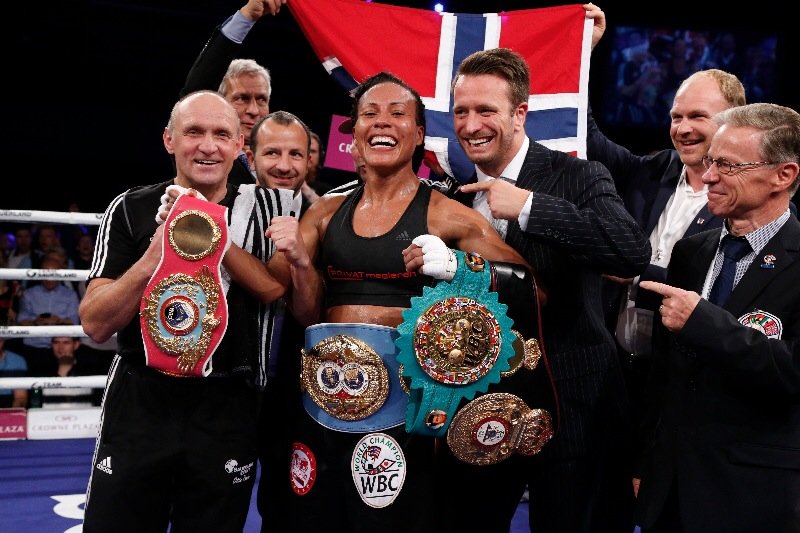 Cheered on by her loyal army of travelling Norwegian fans, Brækhus once again proved why she is the pound-for-pound female number one with a classy performance against the tenacious Habazin. All three judges scored the fight 100-90 in favour of ‘The First Lady’.

‘’I’ve been dreaming of this moment for a long time,’’ said Brækhus. ‘’To become the first female boxer to unify a division is a huge achievement and something that I am extremely proud of. I would like to thank all the fans that travelled to Copenhagen to support me and Ivana for the part she played in this historic fight.’’

Said promoter Nisse Sauerland: ‘’Cecilia is a phenomenal athlete. Not only will she go down in history as the first female unified champion but it is our belief that she will be remembered as the greatest female boxer of all time.’’

‘’This was the best performance of my career so far,’’ said Svensson. ‘’Riederer was very tough, I hit her with some big shots and she kept coming. Tonight I have shown that I belong at the top with the world’s elite and I’m ready to challenge for the regular title.’’

Light heavyweight Erik Skoglund (21-0, 11 KOs) continued his climb up the world rankings. The European (EU) and WBC Youth Champion added the IBF Intercontinental crown to his collection with a dominant display against Stefano Abatangelo (18-4-1, 6 KOs). After twelve rounds of action Skoglund was ahead 118-109, 120-106 and 118-108.

‘’Abatangelo gave all that he had but I never felt like I was in trouble,’’ said the young boxer from Nyköping. ‘’This was another step up and a good test to prepare me for the bigger challenges ahead. The atmosphere in Copenhagen was electric and I want to thank all the fans for coming to support me.’’

Said promoter Nisse Sauerland: ‘’Sweden is becoming a hot bed of boxing talent with our young stars leading the way. Klara showed guts and determination befitting of a world champion, while Erik’s potential, at just 23 years old, is frightening.’’