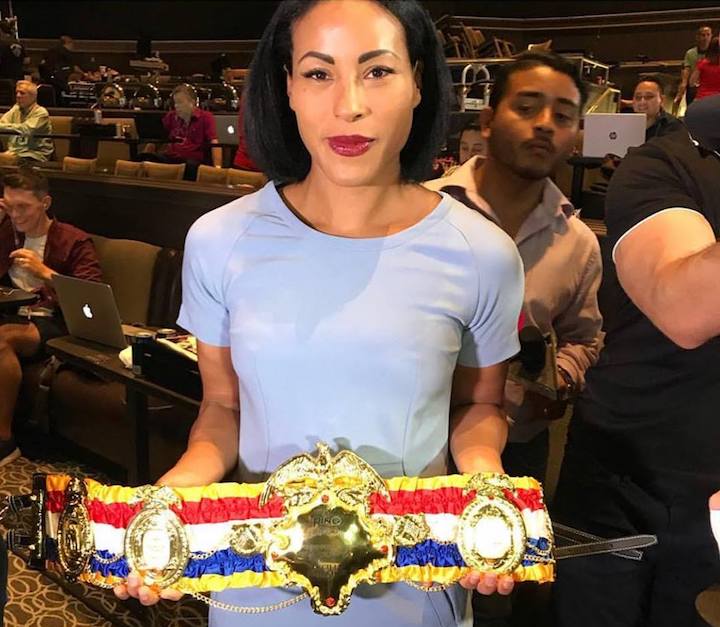 The presentation of the first belt of its kind was made by RING Magazine’s Editor-in-Chief Doug Fischer in the Media Center for the World Middleweight Championship clash between Saul ‘Canelo’ Alvarez and Gennady ‘GGG’ Golovkin.

“This is one of my biggest dreams, a dream I was never really able to believe would be true,” said Braekhus. “I remember watching Muhammed Ali with his Ring belt, and I was wondering whether a female fighter would carry his belt. I never dreamt I would be the one, and the first one.”

“I am so happy and proud, and this is one of my biggest moments in boxing. I will do my best to prove that I am the best female fighter in the world and honor this belt,” said Braekhus.

“Right now, it’s just about having fun, and enjoying myself,” she explained. “I have nothing left to prove. So, I’m trying to see how hard I can push it.” Braekhus says she’s open to moving up in weight to create new opportunities and see what’s out there. “Absolutely. That’s what it’s all about now.”

Stated Fischer, “This is an overdue belt, I don’t even want to hold it anymore,” said Fischer, as he handed the hardware to Braekhus. “Cecilia has been a vanguard in women’s boxing. This is not going to be the first Ring Championship title we award to a female fighter. She is the first because she is the most accomplished out there.”

“If you see her fight, you don’t think, oh, she’s good for a woman. She’s just amazing. She’s a vanguard, a pioneer. As a female fighter, if you have dreams of turning pro, if you dream about being an undisputed champion, you look at her,” said Fischer.

“Promoters are realizing they’re easy to work with,” said Fischer of women’s professional boxers. “They aren’t divas. They’re not asking you to break into Fort Knox. The ratings are good and they sell tickets. You’d be a fool not to (book them). It’s going to normalize it, it’s not going to be a sideshow like 20 years ago,” added Fischer.

On January 5, 2018, Braekhus was named by the Boxing Writers Association of America (BWAA) as the First Female Fighter of the Year for 2017, a campaign which featured three sensational performances in her native Norway. The presentation of the award took place on Friday, May 11, 2018 in New York City at the association’s annual awards dinner.

On May 5, 2018, Braekhus was featured in the first women’s bout telecast in the storied history of HBO’s World Championship Boxing winning a 10-round decision over Kali Reis. Her victory from the iconic Stubhub Center in Carson, CA averaged an extraordinary 904,000 viewers in the live telecast on HBO.

In their inaugural member poll for the Women’s Pound-for-Pound List, the BWAA’s announced on June 26, 2018 that Braekhus was voted the #1 Pound-for-Pound Women’s Fighter in the World.

Fighting for the first time in Moscow, Russia, Braekhus won a 10-round decision over WBC Interim Junior Middleweight Champion Inna Sagaydakovskya on July 21, 2018 at the Olympic Stadium.