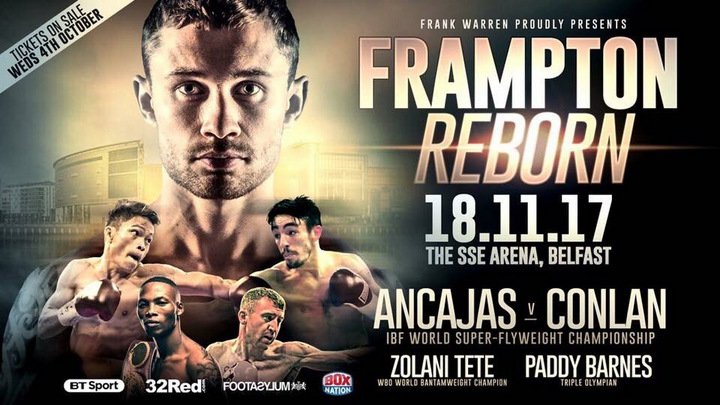 Frampton went on to create history by becoming the first Northern Irishman to win World Titles in two weight divisions when he defeated Mexican Leo Santa Cruz in an unforgettable battle for the WBA Super Featherweight Championship in New York in July 2016.

It was Frampton’s first fight as a professional at Featherweight, having moved up a division after unifying the IBF and WBA Super-Bantamweight titles by outclassing Scott Quigg in Manchester earlier that year.

Garcia, 27, holds a top record of 33 wins from 37 contests; with 24 of those victories coming by way of knockout. Before a surprise loss to Diuhl Olguin, which he quickly avenged, his only career losses had come to two-weight World Champion Hozumi Hasegawa and rising star Joseph Diaz.

“This is a fight that really excites me,” said Frampton. “Garcia will definitely come and have a go. He’s a typical Mexican warrior, he’s tough and he’s game and he’ll try and put it on me in front of my home crowd.

“He has never been stopped in his career and has only lost to World class opposition, excluding the loss against Olguin. It will be good to get a fight in against a live opponent before I get one of the big boys in the new year.

“This fight has been a long time coming and it’s good to be back out in Belfast topping a double World Title bill that also features my good friend Paddy Barnes defending his WBO European title.

“It’s a great bill, probably the best bill that Ireland has ever seen, I don’t think people will criticise me too much for saying that. It’s a quality bill and to be topping it is a huge honour.

“I asked for a ten-round fight. I would have been happy to be doing twelve rounds but speaking to my team after the bad year I’ve had and the long layoff they thought it was only fair to come back with a ten rounder before we target the big names.”

Joyce has made a thunderous start to his professional career with some eye-catching displays and has the opportunity to showcase his ability on a huge stage. The 2016 Rio Olympian defeated Ivan Godor over six rounds in his last outing, the first time that Joyce has been extended further than the third round since turning professional.

“It’s a great opportunity.” said Joyce. “The atmosphere inside the arena is going to be absolutely incredible and I can’t wait to get out there and put on a show.

“It was good getting the rounds under my belt. The first two fights ended early, it’s always good to get the knockout, but getting the ring time was great experience. I’m always in the gym pushing myself and this fight will be no different. I’m in this sport for World Titles and that’s why I push myself to the limit in training every day.”

Crocker has exploded onto the professional scene with a series of hard-hitting displays and is now preparing to deliver another explosive performance at the SSE Arena. Since switching to the professional ranks, Crocker has yet to be extended further than the second round in any of his three contests.

“It’s going to be a special night.” said Crocker. “Big fight nights are always special in Belfast but this one will be on another level. When Carl Frampton is in action the city is electric and I can’t wait to be part of it.
.
“It’s been a great start to my career and hopefully it continues. The knockout streak is good to have but I won’t be putting any pressure on myself to get the stoppage. I’ll be looking to do what I know I can when the bell sounds and if the knockout comes I’ll take it.”

Ward is looking to continue the winning momentum after making a flawless start to his career. It’s another Belfast fight night for the Light-Heavyweight and he’s looking forward to making his fifth appearance in his home city.

“It’s been a great start and I want to keep it going,” said Ward. “I’ve started hurting my opponents in the last couple of fights and it was good to get the stoppages but it’s getting the win that counts and I want to keep moving forward and progressing.”

“It’s great having these events in Belfast and the response you get from the fans is unbelievable. Training away from home is tough but it makes it worthwhile when you get the opportunity to fight in front of your own support and it’s going to be another great night.”

Dickinson is quickly establishing himself as one of the Heavyweight division’s most exciting prospects and the Liverpool man is delighted to be a part of the action on November 18th. Two knockouts in his first two appearances have set him up perfectly for the new season and the big-hitting powerhouse is excited ahead of his third appearance.

“I made my debut in Belfast and it’s great to return” said Dickinson. “It was a great atmosphere in June and I’m expecting this one to be even better with Carl Frampton back boxing in the city.

“It’s all gone perfectly to plan so far and I believe it’s going to keep getting better. I’m working hard in the gym every day, working on different things and I’m planning on putting on a show in Belfast. The Heavyweight division is back where it belongs as boxing’s most exciting division and I can’t wait to force my way into the big fights.”

Cully burst onto the professional scene with a destructive first round knockout victory over Gyula Tallosi at the Devenish Complex and is excited to feature on the big stage. An excellent spell in the amateurs has set Cully up perfectly for his professional career and he believes this is the first of many big nights in the future.

“To get the stoppage on my pro debut was the perfect outcome. I wanted to make a big statement and I think I did that with the first round knockout. I believe I’ll be a world champion in the future and these are the occasions that you dream about when you decide to put on the gloves.”

*Opponents will be confirmed in due course*

Limited remaining tickets for Frampton Reborn are on sale now via the SSE Arena Belfast Box Office, www.ssearenabelfast.com and 028 9073 9074.