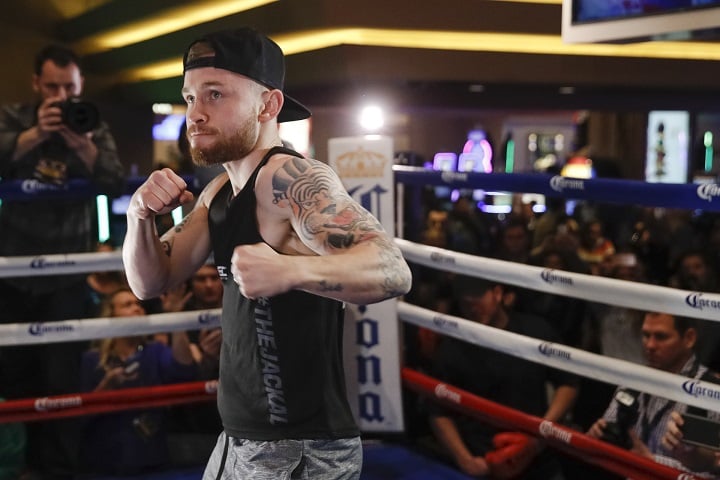 ‘Jackal’ vows to bare his teeth on ring return at the Odyssey this weekend – Carl Frampton is eager to maintain his impressive stoppage record at the SSE Odyssey Arena when he returns to the venue after a two-and-a-half year absence on Saturday night.

Frampton (23-1) has recorded early finishes in all six of his past bouts at the Odyssey and the 30-year-old intends to become the first fighter to stop 27-year-old Garcia (33-3-1), who has only suffered three points defeats in his 37-fight career.

“I can’t wait to get going,” said Frampton. “It’s two-and-a-half years since I last fought in Belfast and I’ve a good record here – a 100 per cent stoppage rate in the Odyssey so I’m hoping to continue that.”

Frampton and Garcia came head to head at Thursday’s final pre-fight press conference at Belfast’s Clayton Hotel, while the pair will take to the scales at the same venue on Friday afternoon.

‘The Jackal’ claims that he is feeling refreshed after changing up his backroom team, with promoter Frank Warren, advisors MTK Global and new trainer Jamie Moore now in his corner.

“I feel good,” said Frampton. “It’s the best I’ve ever felt so close to a fight if I’m being honest. I’m relaxed but excited as well. People are noticing a wee spring in my step so I’m happy and looking forward to the fight.”

The former world featherweight champion is also keen to impress superstar Saul ‘Canelo’ Alavarez, who will be in the Odyssey on Saturday night to support his fellow Mexican Garcia.

“Canelo is going to be ringside and it’s an honour to have him here with him making the trip the whole way to Belfast,” said Frampton. “Obviously he’ll be here supporting Horacio Garcia, but he’ll be leaving disappointed when I get the win. But it’s great to have him here.”

As his big night approaches, undefeated Conlan (19-0) admitted that he is trying to contain his excitement as he focuses overcoming the Manny Pacquiao-promoted Ancajas (27-1-1).

“It’s exciting because I’m eager to see how I do and how I perform. I’ve had a great training camp and everything is done,” said 31-year-old Conlan. “I’ve never looked as good in camp. I’d be the first to tell you that the majority of the time you’d usually have as many bad days as good days, but for this one it’s all be fantastic and I’ve had a completely different attitude.

“I feel in a great place mentally as well as physically, so I’m excited – very excited,” added Conlan, who insisted that he had no emotion when coming head to head with his southpaw foe at Thursday’s final pre-fight press conference.

“It’s always just a blank face to me. I like to get a look at the opponent to compare height and that type of thing, but it’s all done and I’ve been visualising fighting him for the past eight weeks. I’m fully prepared.”

Frampton went on to create history by becoming the first Northern Irishman to win World Titles in two weight divisions when he defeated Mexican Leo Santa Cruz in an unforgettable battle for the WBA Super Featherweight Championship in New York in July 2016.

It was Frampton’s first fight as a professional at Featherweight, having moved up a division after unifying the IBF and WBA Super-Bantamweight titles by outclassing Scott Quigg in Manchester earlier that year.

Garcia, 27, holds a top record of 33 wins from 37 contests; with 24 of those victories coming by way of knockout. Before a surprise loss to Diuhl Olguin, which he quickly avenged, his only career losses had come to two-weight World Champion Hozumi Hasegawa and rising star Joseph Diaz.

“This is a fight that really excites me,” said Frampton. “Garcia will definitely come and have a go. He’s a typical Mexican warrior, he’s tough and he’s game and he’ll try and put it on me in front of my home crowd.

“He has never been stopped in his career and has only lost to World class opposition, excluding the loss against Olguin. It will be good to get a fight in against a live opponent before I get one of the big boys in the new year.

“This fight has been a long time coming and it’s good to be back out in Belfast topping a double World Title bill that also features my good friend Paddy Barnes defending his WBO European title.

“It’s a great bill, probably the best bill that Ireland has ever seen, I don’t think people will criticise me too much for saying that. It’s a quality bill and to be topping it is a huge honour.

“I asked for a ten-round fight. I would have been happy to be doing twelve rounds but speaking to my team after the bad year I’ve had and the long layoff they thought it was only fair to come back with a ten rounder before we target the big names.”

Promoter Frank Warren said: “Carl is an Irish boxing legend and to be promoting his first fight back in Belfast since creating history is a huge honour. He is a fighting man and asked for a tough opponent on his big return.

“Garcia holds a top record and will provide a test for him on November 18th. By the time the fight comes around, Carl will have been out of the ring for over ten months. He has a new trainer, management team and promoter, it is a lot for a fighter to have to deal with but I am expecting to see him back at his best next month.

“Once he has got a good fight under his belt we will push on to one of the big boys in the new year and then Windsor Park next summer, which is where we want to be with him, in a massive fight.”

Tickets for Frampton Reborn will go on sale to the general public at 12 noon on Wednesday 4th October via the SSE Arena Belfast Box Office, www.ssearenabelfast.com and 028 9073 9074.

Conlan: I won’t go to war for the sake of it against Ancajas – he’s a boxer, not a brawler

Jamie Conlan has insisted that he will produce a disciplined performance on Saturday night to claim his first world title at the SSE Odyssey Arena.

While he is undefeated in 19 fights, Conlan – the brother of former world amateur champion Michael – has gained a reputation as a warrior, earning the nickname ‘The Mexican’, having featured in a number of dramatic toe-to-toe tussles.

The 31-year-old Belfast native insists he will resist the urge to go to war against the formidable Ancajas (27-1-1), however, as the Manny Pacquiao-promoted southpaw is a technically gifted fighter.

“A very disciplined performance is needed,” said Conlan. “I can’t really get carried away in this one and I think the kind of style he brings will make me be a lot more tuned in. He’s more of a boxer than a fighter, more a technical boxer than a brawler, so it could be a different gameplan than what I’m used to. It could always go the other way and turn into a fight, but we’re preparing the right way to deal with this fella.”

Conlan was on a brief scouting mission during the summer when Ancjas featured on the same Pacquiao-headlined bill as Michael Conlan in Brisbane.

And the challenger was impressed with the champion’s victory over Japan’s Teiru Kinoshita when watching him in the flesh last July.

“His training time was the same time as Michael, so I seen him working out a bit,” explained Conlan. “My dad [amateur coach John] sat down and watched a bit of him on YouTube and he’s a very good operator. He’s world champion for a reason and in a division that’s pretty hot and heavy, he’s up there with the best of them, so it will take the very best of me to beat him.”
Prior to signing up with Matthew Macklin’s MTK Global, Conlan saw a number of big fights fall through so the Falls Road fighter is overjoyed to finally be preparing for his big night.

“This is something I’ve worked for a long while and what I’ve been gearing towards for a long while,” said Conlan. “When I signed with Macklin and MTK it was what they set out for me. It was a plan they had in place to put me on this path.

“I’ve rarely met people in boxing that don’t want something out of it, but when I sat down with them [MTK], I knew it was different with Matt. He’s trying to look after the boxers, who are usually always the guys who get screwed over. MTK are trying to change that and I can’t fault anything they’ve done,” continued the 31-year-old, who is delighted to have Frampton as a stablemate after his fellow Belfast native recently signed an advisory deal with MTK Global.

Conlan spent most of his training camp in Glasgow with trainer Danny Vaughan, while his Olympian brother Michael – another MTK star – acted as a sparring partner for a period.

“Mick was over for the first few weeks of camp. He was able to imitate a southpaw and I’ve ticked every box and I’m 100 per cent prepared physically and mentally,” said Conlan, who insisted he is not put out by the fact that his brother and Frampton are so often the main focus of the media and fight fans.

“I never really look at it that kind of way,” said the modest challenger. “Even on the night, the fight will probably be second fiddle to Carl’s non-title fight, but it doesn’t bother me in the slightest.

“I’m happy with myself and how my career is going. With my performances, I’m my own worst critic. But overall I’m happy because no-one has beaten me yet.

“Mick and Frampton are crossover stars and it’s brilliant for everyone else because if they’re in the papers and getting big shows then the people on the undercards are getting work and getting a wage.

“Recognition of your peers is a big thing for me… and that seems to have come with my performances and that’s something I’d hold in a lot higher regard.

“I don’t even tell people I’m a boxer half the time – just that I’m Michael’s brother!”

With Belfast and Irish pro boxing experiencing a boom period, Conlan hopes a world-title success this weekend will keep the good times rolling.

“It’s brilliant for the big names, but it’s fantastic for the boxers who are on the undercards too,” he said. “Every lad gets a piece of the pie – five minutes in heaven and 15 minutes of fame! Everyone gets a wage out of it and a chance to showcase their ability.”