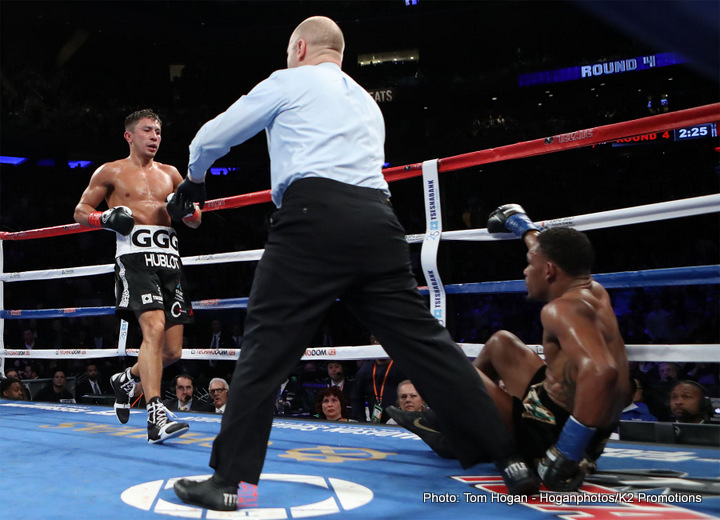 Up until his controversial September draw with Canelo Alvarez, world middleweight king Gennady Golovkin had never been pushed farther, or closer than when he met Daniel Jacobs in March of this year. As fans know, “Miracle Man” Jacobs was ultra-competitive against Triple-G (suffering a flash knockdown but at no time really appearing hurt or buzzed), eventually losing via close, some said controversial, decision.

Now, with the former WBA middleweight champ having returned to winning ways with his wide, near shut-out UD over the previously unbeaten Luis Arias, the Brooklyn warrior is looking at his next big fight – and his new promoter Eddie Hearn says it could be GGG-Jacobs II next if no deal can be reached for a Golovkin-Canelo return.

“I said to Tom Loeffler the other day, ‘Listen, if Canelo-Golovkin doesn’t happen, we’re ready to go with Jacobs-GGG II,’” Hearn told Inside Boxing Live Podcast as quoted by Sky Sports. “We want to get our date, know that Danny Jacobs can have four, five weeks off with his family, enjoy his Christmas and get straight back into camp.”

Hearn added how he wants Jacobs to remain as busy as possible and that it is also possible he could face the winner of the December 16 clash between WBO middleweight champ and big-hitting challenger (and former GGG foe) David Lemieux: “I think the winner [of BJS-Lemieux] is a natural fight as well,” he said. “Our only concern is if Lemieux wins, they’ll try and hold him up for the winner of Canelo and Golovkin. We want to be in control of our own destiny.”

Either way, Jacobs, often described as the second or third best middleweight on the planet, is deserving of another big fight. With Oscar De La Hoya recently saying how talks over a GGG-Canelo return are “going slow,” maybe we will indeed see GGG-Jacobs II next instead. Can Jacobs improve on his praised but at the same time largely defensive performance against the unbeaten world number-one?

Or if it is Jacobs against either Saunders or Lemiuex, can Jacobs pick up a win that would almost guarantee him a shot at the eventual GGG-Canelo rematch winner? Jacobs has, potentially, a couple of very big options.