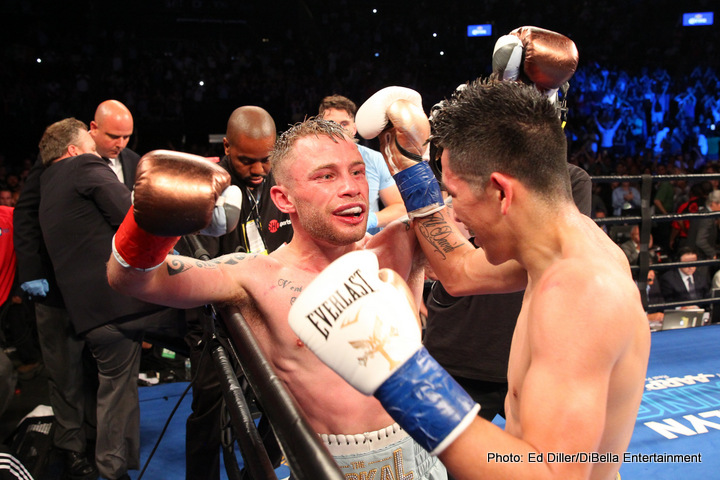 Irish warrior and new WBA featherweight king Carl Frampton is still celebrating his terrific win over Leo Santa Cruz in a definite FOTY candidate; at least “The Jackal’s” army of fans are still celebrating. And the reasons to be upbeat if you are a Frampton fan just keep coming. As per a story on Irish-Boxing.com, Frampton is now ranked in the top-10 pound-for-pound boxers in the world with The Transnational Boxing Ranking Board.

The TBR Board, seen by many as providing the most unbiased and accurate rankings in the sport, lists the following top-10 P-4-P:

So, what do you think of these rankings as a whole and what do you think of Frampton’s placing? Fans might ask, where is Manny Pacquiao (who defeated Tim Bradley in April, Bradley being ranked at No.8)? Is Andre Ward a little too low at No.6? Should Frampton really be ranked above Guillermo Rigondeaux, a fighter his critics claim he has shamelessly ducked? Where in the TBR top-10 is Canelo Alvarez? Tyson Fury?

But compiling any top-10 pound-for-pound list is fraught with danger: you simply cannot please all of the people all of the time.

That said, here’s another top-10 you may or may not agree with (probably the latter!)

Although Frampton does not yet rank in everyone’s top-10, the now two-weight champion is undeniably a fine talent and after a couple more big wins, he will be right up there with the Gonzalezs and the Wards. Now, if only Frampton would take the ultimate test and get it on with Rigondeaux; a superb talent who seems destined to go down as one of the most avoided lower weight boxers in the history of the sport.

Just imagine how YOU would feel if you were Rigondeaux.