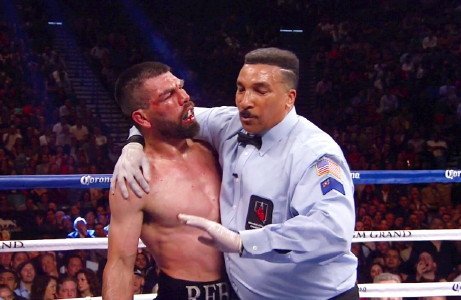 Not only was Saul “Canelo” Alvarez’s victory over Alfredo Angulo a one-sided affair visually, it also was reflected in the final punch stats from last Saturday night with Canelo out-landing Angulo over 2-1. Anglo threw more than 200 more punches than the red-haired Canelo, but his accuracy was a poor 14% due to his slow hand speed and because of the head movement that Canelo was using in the fight.

Here are the punch stats courtesy of Showtime:

It was pretty brutal to watch the huge disparity of punches thrown and landed between the two fighters. You’ve got to give Canelo a lot of credit for making Angulo look so bad, because I don’t think too many people suspected that he’d dominate him at this level. Going into this fight, fans and sports writers believed that it would be a competitive match-up to where Angulo would have his moments.

Canelo was picked by most people to win the fight, but they felt that Angulo would make him work hard. But this fight wasn’t a tough bout for Canelo, as he was able to hit Angulo all night long without much worry about getting hit back from him.

Canelo mentioned it himself after the fight that he felt he couldn’t feel his power, and he probably telling the truth because Angulo’s shots were so slow that it would be impossible for him to be able to generate any power due to the lack of speed.

“I stood in there and went toe-to-toe [with Angulo], because I didn’t feel his punches. I felt my punches to be stronger than him,” Canelo said after the fight.

Angulo needed to put more power into his shots, but he just didn’t have it last night. His trainer Virgil Hunter wanted Angulo to open up with big shots and hit Canelo everywhere, but Angulo’s one impressive power was gone. It’s possible that his loss to Erislandy Lara last year took something out of Angulo.

Usually a fighter that has taken a hard beating the way that Angulo did still possesses their power. It’s the timing and reflexes that are gone. But with Angulo, he didn’t have his power, timing, speed or reflexes. He was just there physically in body only taking shots from Canelo for 10 rounds.