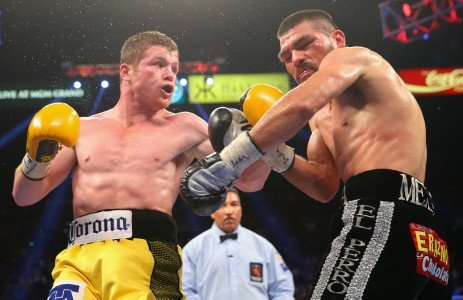 (Photo credit: Esther Lin/Showtime) Trainer Virgil Hunter isn’t too happy with the way that referee Tony Weeks halted the fight last Saturday night in the 10th round in the Saul “Canelo” Alvarez (43-1-1, 31 KO’s) vs. Alfredo Angulo (22-4, 18 KO’s) fight at the MGM Grand in Las Vegas, Nevada.

Weeks didn’t give Angulo much of a chance in the round before stopping the fight, and that didn’t sit too well with Hunter, who believed that his fighter Angulo was coming on at the time of the stoppage in the 10th.

“I’m very upset,” Hunter said via ESPN. “I told the referee and the doctor that if Canelo put two or three shots together that I would stop the fight. He landed one punch. Everyone knows Alfredo was coming on strong, everyone knows that.”

I’m not sure that Angulo was coming on strong as Hunter says, but he at least was trying, you’ve got to give him that. But you can’t blame Weeks for not wanting to sit back and watch Angulo continue to get beaten up, because he’d been little more than a heavy bag for Canelo to pound on for the first 9 rounds of the fight.

Angulo’s trademark power was totally missing in the fight, and all he had was his punch resistance. Even Floyd Mayweather Sr. remarked that Angulo looked like he was purposely not trying to hit Canelo hard, and he couldn’t understand why he was doing this. Without his punching power, Angulo had no chance in this fight. Maybe he could have come on and swept the last three rounds had he started throwing punches with full power instead of the pitty-pat shots he was throwing at Canelo, but he didn’t seem too interested in doing that.

Canelo came in at a career-high of 174 lbs last night, and he punched like a light heavyweight rather than a junior middleweight. You’ve got to give Canelo credit for being able to dehydrate himself enough to at least make the 155 lb weight limit that he had made especially for this fight, but you also have to wonder why he’s fighting still at junior middleweight with him weighing as much as he does? Is he doing this to have an advantage over lighter guys?

This wasn’t the first time Canelo weighed over 170 for one of his fights at junior middleweight. He weighed 170 lbs for his fight against a 150 lb Floyd Mayweather Jr. last September, and before that, Canelo weighed 172 for his unification bout against Austin Trout last year in April. It would be better if Canelo moved up to the middleweight division and fought guys more or less his own size. He would still likely have a weight advantage over guys like Gennady Golovkin and Sergio Martinez, but at least the weight difference wouldn’t be so pronounced.