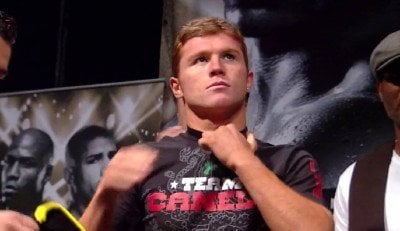 Ric Flair once said, “To be the man, you gotta beat the man.” Apparently, Saul “Canelo” Alvarez never adopted this philosophy.

“I just couldn’t find him,” said an exhausted and frustrated Alvarez following the loss.

The following year, Alvarez declared that he was taking May 2, 2015 from PPV king Floyd Mayweather Jr. In other words, he declared his intention to be the man after losing to the man.

Now, after two power grabs gone terribly wrong, Canelo Alvarez cools off in the cold dark shadow of the biggest boxing event of this century.

Floyd Mayweather, who is by far and away the biggest PPV draw in the sport, has fought on Mexican holiday weekends corresponding to Cinco de Mayo and Mexican Independence Day in nine of his last ten bouts, including all of his last eight bouts.

Mayweather has long claimed that he fights on these weekends to honor Mexican boxing fans. Canelo supporters see it differently.

“To poach on that date, which is a Mexican holiday by non-Mexicans, shows a terrible disrespect for the Mexican people, both those living in Mexico and those living in the United States,” said promoter Bob Arum to boxing media in 2014, alluding to Mayweather Jr.’s fight schedule. “Anybody who does the poaching ought to be ashamed of themselves.”

Initially, it appeared that Alvarez and De La Hoya had a plan to unseat Mayweather.

On This Day: When Baer Destroyed Carnera And Max Had Too Much Fun

Fighting on a competing network would be the first necessary step for Canelo to claim Mayweather’s favorite weekends. Accordingly, Canelo moved from Showtime, where Floyd Mayweather Jr. hold an exclusive contract, to HBO.

Immediately after the move, Alvarez and De La Hoya announced their intention of taking the coveted Mexican holiday weekends.

“Canelo wants to take back the tradition and fight on Cinco De Mayo for his fans all over the world,” said Oscar De La Hoya to boxing media following Canelo’s move to HBO.

Next, Canelo challenged Miguel Cotto for Cotto’s 160lb title. Canelo knew that short of a May 2, 2015 bout against Pacquiao, which appeared less probable at the time, Mayweather could likely not find an opponent who could compete with viewership of a Canelo v. Cotto bout. However, Miguel Cotto never shared Canelo’s need for a May bout and was in no rush to sign Canelo’s contract.

In another move more audacious than his age or resume justifies, Canelo gave Cotto a January 16, 2015 deadline for the Puerto Rican champion to accept Alvarez’s offer to fight on May 2, 2015. The elder world champion blew off Canelo’s deadline.

Sticking to his guns, Alvarez insisted on fighting May 2, 2015, even if it was not going to be against a top opponent. Consequently, Alvarez agreed to a substantially less lucrative bout against James Kirkland at a 155lb catch-weight. This bout would be Canelo’s first non-PPV bout since before his loss to Mayweather. Canelo accepted this outcome as necessary to claim the coveted May 2, 2015 date.

However, Mayweather did secure a match against Manny Pacquiao on May 2, 2015.

On February 20, 2015, involved parties announced that Mayweather v. Pacquiao would be a joint broadcast involving both Showtime and HBO on May 2, 2015. Immediately, HBO moved Canelo’s bout against Kirkland to May 9, 2015.
Canelo now has no elite opponent, no PPV date, and no bouts scheduled for May 2. 2015.

It takes the patience of a glacier to achieve the superstar status of Manny Pacquiao or Floyd Mayweather Jr. It also requires wins over the most elite fighters. As of 2015, Alvarez has neither. At twenty-four years old, Alvarez is well over a decade younger than Manny Pacquiao or Floyd Mayweather Jr. Although Alvarez has time to reach Mayweather’s level of greatness, that time is certainly not coming this May.

1 The judge who scored in Alvarez’s favor was C.J. Ross. Ross is infamous for controversial decisions, including her scoring Timothy Bradley the winner of his first bout against Manny Pacquiao. Her name has become synonymous with bad scoring.

Bill Barner is a former certified “USA Boxing” Judge, Referee, and Trainer. He is a former sparring partner for several amateur and professional fighters and currently practices criminal and immigration law in South Florida for BarnerRossen PA. He has appeared in The Ring Magazine, Bleacher Report, VOICE Magazine, Youngstown Vindicator, USABF, and is a regular contributor to East Side Boxing. He can be reached at barner@barnerrossen.com or on twitter @BarnerBill.