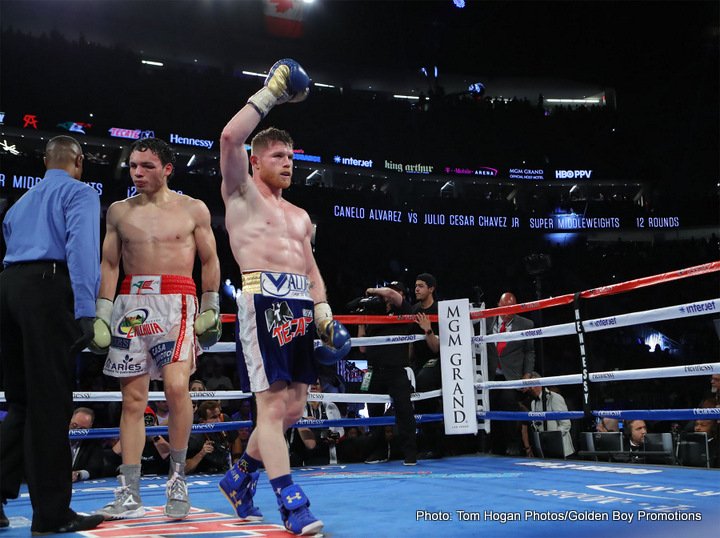 “Tonight, I showed I could move, I could box, I showed as a fighter I can do all things,” Canelo said. “I thought I was going to showcase myself as a fighter that could throw punches, but he just wouldn’t do it. I’ve shown I can do lots of things in the ring, anything a fighter brings-I’ve shown I can showcase myself. I wanted to try something new, I never sit down in sparring and I didn’t want to sit here. GGG-you are next, my friend. The fight is done. I’ve never feared anyone, since I was 16, fighting as a professional. When I was born, fear was gone. I never got my share of fear. I’m very happy, and the rivalry is going to show my skills even more. I’ve had difficult fights, and that will no doubt be a tough fight. But, I always say, Canelo Alvarez is the best because I fight the best.”

“Canelo beat me, he beat me at the distance,” Chavez, Jr. said. “He is a very active fighter-he’s very good and he beat me. I wanted to box but he went to the ropes and I just needed to throw more punches. I would’ve attacked more I would’ve been countered by his punches. Nacho told me to do that but the strategy didn’t work. The speed and the distance was the key. I didn’t feel that much power because I felt dwindled, I couldn’t throw as many punches as I wanted. My father kept telling me to throw more punches from the ringside.”

“I feel very excited; in September, it will be a different style-a big drama show,” said Golovkin. “I’m ready. Tonight, first congrats to Canelo and his team. Right now, I think everyone is excited for September. Canelo looked very good tonight, and 100 percent he is the biggest challenge of my career. Good luck to Canelo in September.”

In the co-main event, Montreal-based slugger David Lemieux (38-3, 33 KOs) won a hard-fought unanimous 10-round decision over an extremely game Marco “Dorado” Reyes (35-4, 26 KOs).The three judges all saw the super middleweight tilt for Lemieux by the scores of 98-91 and 99-90 twice. Lemieux beat and bloodied Reyes from the first round on, but Reyes never went down.

“He is a solid fighter,” Lemieux said. “I give him the respect, he went the full 10 rounds. I could have done better but I hurt my hand after round two.” 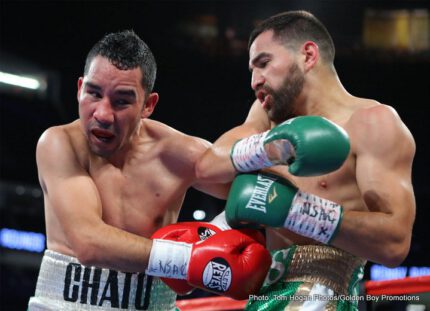 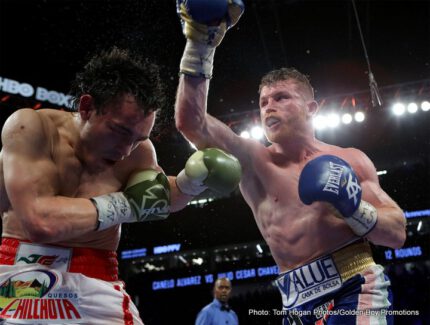 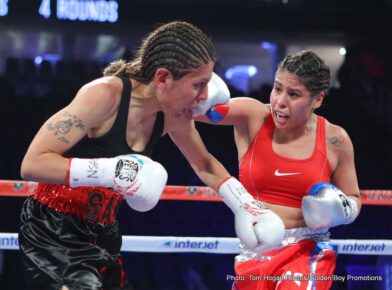 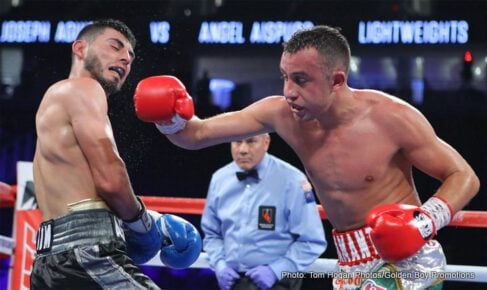 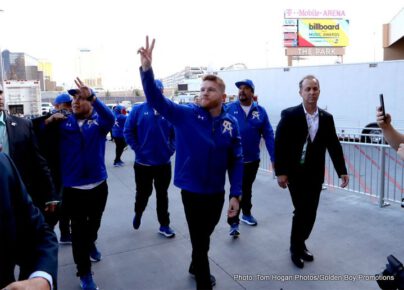 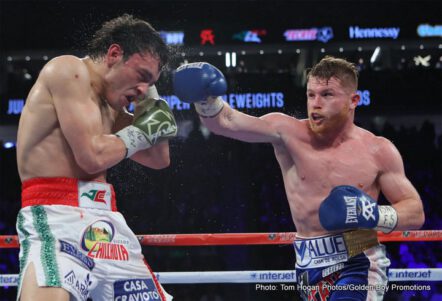 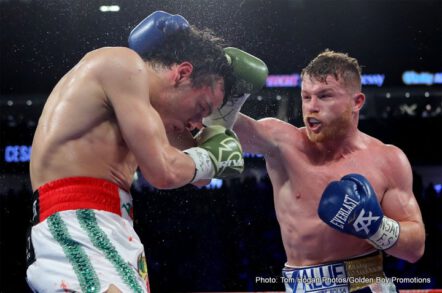 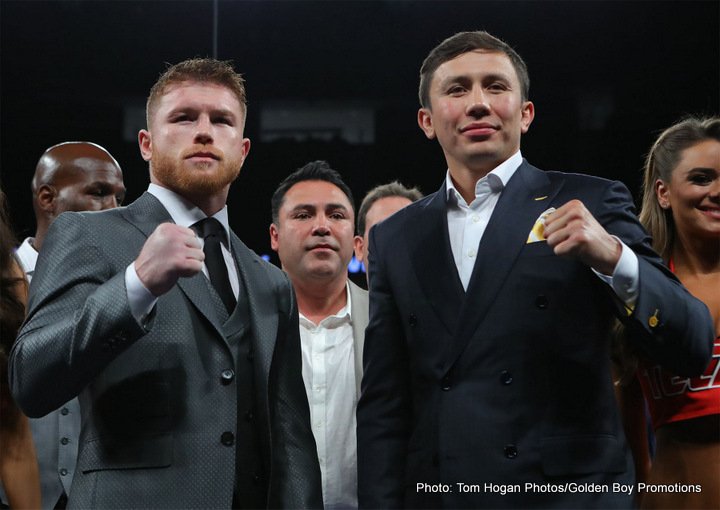 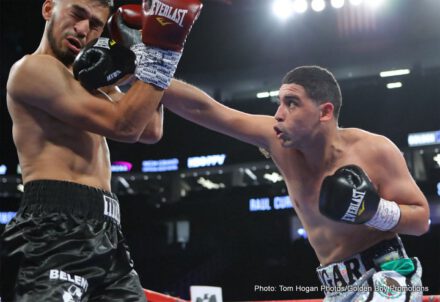 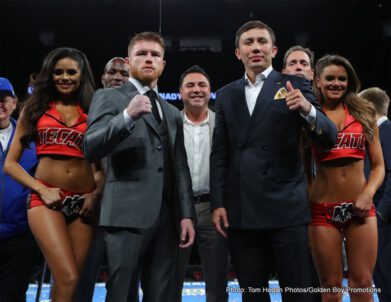 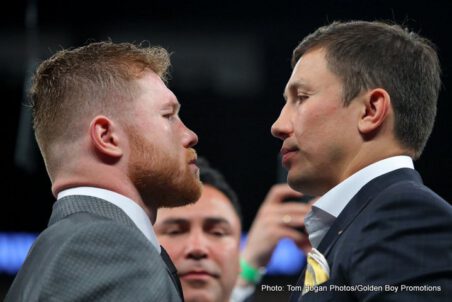 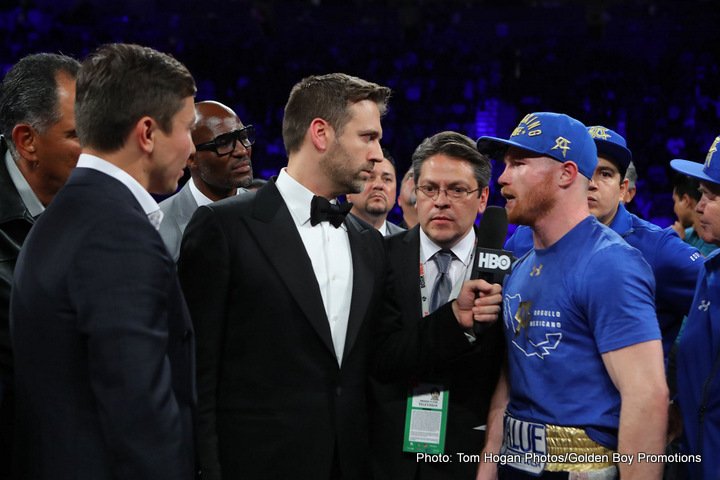 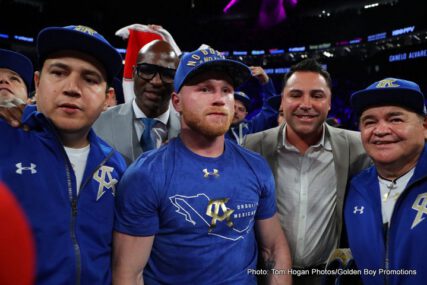 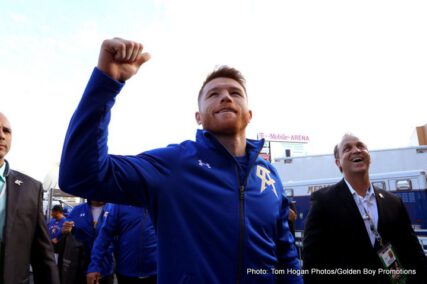 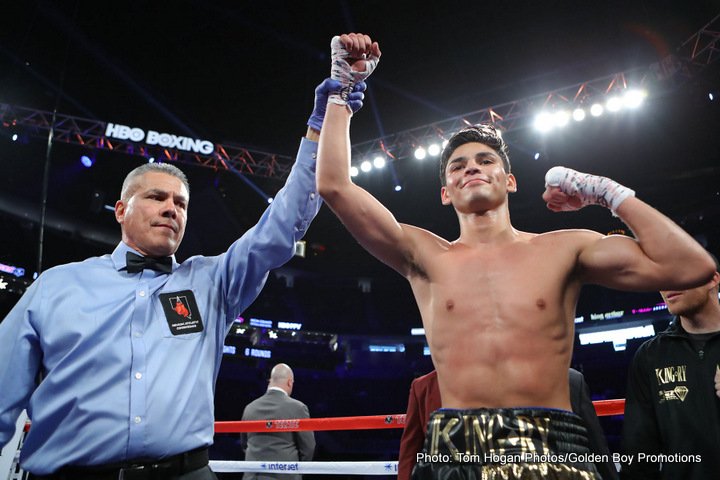 “We obviously came with the best we had,” Reyes said. “In the last rounds, my objective was to throw as many shots as I could because I knew when I lost that point I was going to have to knock him out to win. He’s a great fighter and there’s a reason why he’s the third ranked in the world. We’re satisfied with the fight and the performance, and we did our best.”

Returning from a year-and-a-half layoff and making his debut at welterweight, Lucas “La Maquina” Matthysse (38-4, 35 KOs) of Chubut, Argentina roared back from his time off with a thunderous fifth-round knockout of Cleverly, Maryland’s Emanuel “Tranzformer” Taylor (20-5, 14 KOs).

“This victory motivates me, this is exactly what I needed to come back where I left off,” Matthysse said. “I felt great inside the ring and I felt like I dominated the fight at the pace I wanted. I feel great and I’m ready for what’s next.”

“My plan going in was to win,” Taylor said. “My opponent was a tough guy, but I don’t know why the ref stopped the fight. I could’ve kept going more rounds. After this, it’s back to training hard with my team.”

“My plan going in was to feel him out and be smart,” Diaz, Jr. said “Once I had him figured him out, I knew I could keep digging at him with my jab and do work. In the last few rounds, I kept throwing body shots to hurt him, which worked. Next up, I’m looking for a world title shot.”

“My timing wasn’t there — I felt like this was a learning experience,” Avila said. “I need to learn how to pick up the pace in between rounds. Our styles were off and I felt like it could have been a better fight.”

Closing the free-view, 15-time national amateur champion Ryan “Kingry” Garcia (9-0, 8 KOs) extended his knockout streak to five, knocking down Tyrone “Hands of Stone” Luckey (8-7-3, 6 KOs) mere seconds into the first round and unloading in the second until the referee waived off the fight.

“The better the competition, the better the fight for me,” Garcia, fighting in the lightweight division, said. “I felt this was a really great chance for me to show off my skills because I usually get the knockout early. This fight was different because I was able to show how quick I can pop my opponent with a hook. People think because I’m small, I don’t have power-but I have explosive power and speed. I’m ready to go make history from here.”

In a quick turnaround from her March debut, 2012 Bronze Medalist Marlen Esparza (2-0) of Houston, Texas shut out Samantha Salazar (2-4-1) of Dallas, Texas over four rounds, earning the 40-36 unanimous victory on all three scorecards. The flyweight battle featured the debut of three-minute rounds in women’s boxing in the state of Nevada.

“It’s great to make history being the first woman in Nevada to do three-minute rounds,” Esparza said. “I know it’s been done elsewhere-but tonight it feels really special doing it in this fight. I plan on staying at three minutes and not going back to two minutes, so I know we will need to be strategic about how I train and fight.”

Opening up the free view, 2016 Mexican Olympian Raul Curiel (1-0) of Tamaulipas made his professional debut a successful one, earning a unanimous victory decision over Michoacan, Mexico’s Jesus Sanchez (1-2-2) in a four-round super welterweight affair.

“I thought I won all four rounds, but I got the win that I needed,” Curiel said. “I thank God for me and my opponent being able to get out of the ring healthy and safe – he was a strong fighter. I’m going to go back to Mexico for vacation, and jump back into the ring to get ready for my next fight.”

Continuing to build towards a world championship title shot, the slick Santa Ana California-based Ronny Rios (28-1, 13 KOs) unloaded power shots on Daniel “El Chato” Noriega (28-11-1, 15 KOs) until the referee waived off the fight in the fourth round of a scheduled 10-round super bantamweight fight.

“I’m obviously proud of the knock out win but I think as a fighter we are always critical of our performances,” Rios said. “I need to clean up a lot of my mistakes including leaning forward too much and loading up my punches; however, I’m ready for a title shot and some Micheladas for the Cinco de Mayo weekend.”

“I hurt my hand in the third round, but I fought like I usually do so no one would notice, ” said Joseph Aguirre. “I was and still am nervous, but at least I can say that I fought on such a big card. I feel like I had a good performance. My opponent was strong and came forward, and could take a punch.”

HBO Sports presents WORLD CHAMPIONSHIP BOXING: CANELO ALVAREZ VS. JULIO CESAR CHAVEZ JR, the exclusive replay of their highly anticipated showdown, SATURDAY, MAY 13 at 10:05 p.m. (ET/PT). The HBO Sports team, which was ringside at the T-Mobile Arena in Las Vegas for the live HBO Pay-Per-View® presentation on May 6, called all the action, which will be available in HDTV, closed-captioned for the hearing-impaired and presented in Spanish on HBO Latino.

The fight will also be available on HBO NOW, HBO GO, HBO On Demand and affiliate portals.

Heirs to the legendary tradition of boxing royalty in Mexico, both Alvarez and Chavez Jr. brought a wave of support, enthusiasm and pride to their first-ever ring encounter which was tied to the celebration of Cinco de Mayo weekend. Their 12-round fight took place under the bright spotlight of a sold-out T-Mobile Arena.

Alvarez (49-1-1-34KO’s) revealed he will face middleweight king Golovkin (37-0-33KO’s) in his next fight after recording a facile victory over Julio Chavez Jr in Las Vegas on Saturday night.

Post-fight, Canelo said, “Golovkin, you are next, my friend. Where are you? It’s on,” Alvarez said before inviting Golovkin into the ring with him.

In response, Golovkin said, “Congratulations. I feel excited to be part of this big drama show.”

“This is the fight that boxing fans have being calling out for the last few years, said William Hill spokesman Tony Kenny

“GGG looked in a different weight class to Canelo when the pair squared up to promote the fight– and I don’t think there will be too many fans shocked to see that he is the odds-on favourite to win the fight.”