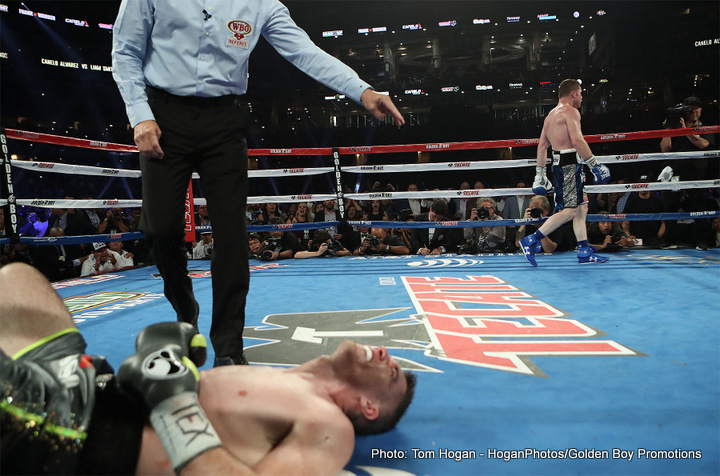 Saul ‘Canelo’ Alvarez looked clinical in claiming the WBO light middleweight title with a 9th round stoppage of Liam Smith on Saturday night. Canelo had been dominant from the opening bell and managed to put Smith down in rounds 7 and 8 before finding a fight ending left hook to the body.

It was in many aspects a typical Canelo performance, looking tremendous in spurts with his fast and accurate combinations, whilst not wasting any shots. For his part, Smith was brave but looked overmatched. To his credit he came with genuine intentions to win, and when the going got tough he went out on his shield rather than just try to survive.

The win gives Canelo a version of the light middleweight title for the first time since dropping his WBA and WBC belts to Floyd Mayweather three years ago. Alvarez is also regarded as the lineal middleweight champion despite having never fought above 155lbs (if he wins a title fight at 156 will he be a three weight world champion?), but is the time now right to make the jump to the full middleweight limit of 160?

In the post fight interview, Canelo was asked some tough questions regarding his rival Gennady Golovkin, claiming that GGG rejected a big money offer to face him. Regardless of who is to blame for the fight failing to materialise, there can be no doubt that a matchup between the two is the biggest fight out there in the boxing world at the moment. The biggest name in boxing against the biggest puncher, the fight would sell worldwide and make both men millions.

Golovkin has blasted through all comers on his rise to the top, but has struggled to find credible opponents. The problem it seems, is that world class talent in the middleweight division is sparse. If Canelo were to step up in weight, the biggest fight in boxing awaits him, but win lose or draw against Golovkin, and the options dry up afterwards. The problems that face GGG right now, could well be Canelo’s problems should he step up.

On the other hand, the 154lb division lacks a single fighter with the star power of Golovkin. What it does have though, is a depth of world class talent and three other belt holders for Alvarez to unify with. The list of talent that Canelo has yet to face includes the Charlo twins, Demetrius Andrade and Julian ‘J Rock’ Williams, whilst there is also the potential for rematches with Miguel Cotto and IBF champ Erislandy Lara. There is also the opportunity to tempt some of the stars of the welterweight division up, meaning that Canelo will be looking at high quality fights for years to come.

Alvarez now faces a big decision. A move to middleweight to face Golovkin is what the fans want. It is also the chance to cement his claim to being the best fighter in the world. However at 26 years of age Alvarez will hope to have many years left at the top of the sport and may be looking at the long term possibilities. We all live in hope that Canelo vs GGG happens sometime soon. But there is a bigger picture for Alvarez. Does he do what’s best for boxing, or what’s best for his career?