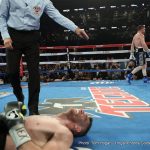 Saul ‘Canelo’ Alvarez looked clinical in claiming the WBO light middleweight title with a 9th round stoppage of Liam Smith on Saturday night. Canelo had been dominant from the opening bell and managed to put Smith down in rounds 7 and 8 before finding a fight ending left hook to the body.

It was in many aspects a typical Canelo performance, looking tremendous in spurts with his fast and accurate combinations, whilst not wasting any shots. For his part, Smith was brave but looked overmatched. To his credit he came with genuine intentions to win, and when the going got tough he went out on his shield rather than just try to survive. 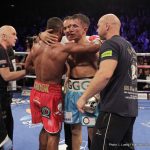 Saturday night was one of those rare occasions where boxing fans could feel some gratification in their love for the sport. It was an evening long etched into the diaries of boxing fans, ever since July with the huge announcement that Gennady ‘GGG’ Golovkin was to visit the UK to defend his middleweight titles against IBF welterweight champ Kell Brook. So often in these cases, the action never quite matches the hype, thankfully on Saturday night, it did. Here, we discuss the fallout from the main event, and potential next steps for both men.