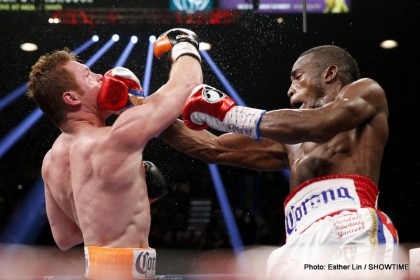 That may not be true, but Alvarez, a megastar in Mexico and in America, is in the driving seat and he has a ton of options to explore. Basically, he doesn’t need to risk losing to Lara a second time. You could argue that Alvarez won the fight last night, while Lara won the boxing match. In any case, Alvarez is almost certain to fight someone else when he returns in November. And De La Hoya sure has an intriguing list of three names as possibilities.

According to Chris Mannix of Sports Illustrated, De La Hoya told him that the three possibilities are: Gennady Golovkin, Miguel Cotto and James Kirkland. All three exciting fighters are Box Office attractions, but Golovkin’s name is obviously the one fans will jump on as the most exciting, dangerous, fascinating and potentially thrilling for Canelo. Is De La Hoya serious, would his star fighter really get in there with the lethal-punching and incredibly gifted middleweight known as G.G.G?

If people gave Canelo credit for taking a risky fight with Lara, and rightly so, how far up would Alvarez’ rep go if he did take this magnificent match-up? And as to how far into the stratosphere Alvarez would rocket if he defeated Golovkin!

True superstardom is already Canelo’s and, the Floyd Mayweather loss aside, he now looks to prove himself as a true great by taking on the biggest and best opposition and beating them. Maybe Canelo will one day get a return with Mayweather as well.