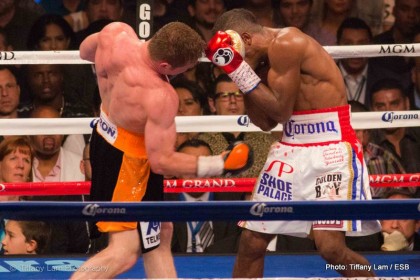 By the fourth round a welt was forming under the right eye of Saul Alvarez, no doubt the result of Lara’s left hand. The Cuban was moving a lot and making his opponent miss, yet Canelo was doing nice body work, thrown with vicious power. Into the middle rounds it became a tale of styles and which the judges would prefer; Lara’s speed and activity, or Canelo’s power and aggression. The boxing world has seen plenty of controversial decisions arise from this scenario in recent years; were the tables being set for another such case?

At the start of the eighth round, but men’s faces were marked up. It was turning out to be just what the experts predicted; a very close and competitive fight between contrasting styles. Lara continued to frustrate his opponent by running and holding, but when he decided to punch he planted his feet and landed with authority. For his part Alvarez remained dedicated to the body attack, but he wasn’t cutting the ring off effectively or coming in behind the jab. A cut opened up around Erislandy’s right eye in the ninth, it appeared that a head butt was the cause. Lara went down at 23 seconds of the round by referee Robert Byrd ruled it a slip. None the less the crowd erupted at the sight.

The championship rounds were more of the same, Canelo stalking and Lara running…A LOT. The Cuban would land beautiful counter punches and snap his opponent’s head back, but was he doing it often enough to win over the judges? By contrast, the Mexican was moving forward and making the fight, but he wasn’t cutting off the ring and many of his punches were missing the target. Was the crowd favorite doing enough to convince the judges? As the final round approached it seemed the fight was up in the air and but men had to know it.

Canelo came out charging in the twelfth, bringing many in the crowd to their feet. Lara ran and held but also counterpunched beautifully in spots. One could see the urgency on Canelo’s face and sense the desperation in his body language; it was clear he knew he needed the twelfth and he fought like it. As the final bell rang, everybody knew it was close bout and a close decision was coming. Would the judges Lara’s sniper like precision head shots or Canelo’s thunderous body shots? The tension in the arena was thick as the scores were tallied. So when Jimmy Lennon Jr announced to the crowd that the judges had reached a split decision, you knew things were about to get serious.

The first score was announced, 115-113…Lara. The second score followed, 115-113…Canelo. And after what seemed like an eternity, Lennon finally announced the third score, 117-111…Canelo! The crowd erupted as their man was awarded the decision, but several ringside observers felt that third score from judge Levi Martinez was too wide. The punch stats told a story of two fights. Lara out landed Alvarez 107 to 97, but the Mexican’s punches were much, much harder. Canelo landed only 9 jabs, compared to Lara’s 55, but he landed 88 power punches (including 73 to the body) while Lara landed only 52. Moreover, it cannot be understated that the southpaw Lara wasted large portions of rounds running. He controlled portions of rounds with his beautiful counter punching, but seemingly gave away rounds in the eyes of the judges.

Saul Alvarez improves to 44-1-1 (31KO) and Erislandy Lara drops to 19-2-2 (12KO). And no matter how you felt about the judging tonight, one thing is crystal clear, Canelo is a huge draw here in Las Vegas. You couldn’t find an empty seat here at the MGM Grand Garden Arena tonight.