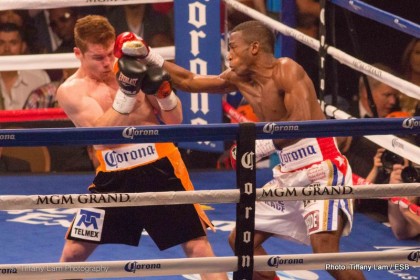 Lara proved he could get Canelo so out of position that he was punching air, even when the shots were aimed at his body. He was just that quick. Canelo dutifully followed after him. He wanted to cut off the ring, but Lara was just too fast. When Canelo got him up against the ropes, he tried to cut off one avenue of escape, thinking he took two ways of escape. One was to his right,, and the other was to back up. He would be forced to move to his left.

But, Lara was too smart. Instead of moving to his left, and possibly be in danger of getting hit by a Canelo right hand, he moved forward and got out to the center of the ring. There he had once again every avenue available. The Cuban great continued to prove he could make Canelo look foolish.

He didn’t dance around all of the time. He managed to also demonstrate that he could hit Canelo. He made good use of his 5 1/2 inch reach advantage. He showed he could thread the needle with a good jab and straight left. In the second round, the area around Canelo’s right eye started to swell.

In the fourth round, Canelo started to land some thudding body shots, but by the fifth round, the right got worse. Now there was an abrasion and small cut around the eye. Canelo’s corner cautioned him about getting desperate. Ronnie Shields told Lara not to change a thing. He wanted Lara to continue to pop Canelo with his right jab and one two’s and then move out of range.

In the sixth, Canelo cranked things up another notch. He became even more aggressive, not worrying about whether he at times looked foolish. He was content with landing more body shots, several of which cracked in on to the belt line of Lara. Referee Robert Byrd didn’t feel a caution was in order, because coming into the fight, Lara had his trunks yanked up pretty high. Canelo know shots around or on the hip can really slow a man down.

Canelo was right, because Lara slowed long enough for Canelo to land an uppercut. It wasn’t a particularly hard punch, but it was hard enough to cause a cut on the eyelid of Lara’s right eye. In the next round, Lara slowed down. He didn’t use his jab as much, and Canelo continued to work the body.

The rounds were tough ones to score. Typically judges don’t reward a boxer as much for body shots, unless they result in some type of immediate result, like a deliberate attempt by the boxer on the receiving end to change his guard, placing more importance on covering up the area being hit. A change in the fighter’s facial expression, like a grimace and grunt might do it. Of course, scoring a knockdown with a body blow is rewarded. However, body shots, no matter how heavy, that don’t change things, don’t typically win rounds.

That was the case in this fight. Lara just wasn’t slowing down, even by the tenth round, and into the eleventh and twelfth. Lara continued to land more to the head, with his sharp shooting, and Canelo continued to be content with hitting what he could hit, the body.

The split decision showed that at least two of the judges felt a boxer shouldn’t be rewarded for just making a fighter miss, no matter how foolish he might make the other guy look. You just don’t get points for that. Canelo was the aggressor, but was his pressure effective. Being made to look foolish at times, makes that point somewhat of a gray area. But, it was those body shots that made the difference. Even if those shots didn’t cause immediate results, they were effective.

Unfortunately Lara placed too much importance on proving he could make Canelo look foolish. He should have placed more importance on being able to hit Canelo, and prove that he could do it more often than Canelo. He didn’t do that, which left the two judges scoring the fight for Canelo with the impression that he didn’t want to take the risk. The basic concept of boxing requires taking risks. If you want to win, you have to be willing to take risks. Lara mistakenly put too much emphasis on the importance of being able to make Canelo miss. No matter how foolish he might have made him look at times, it just wasn’t scoring points.

In the post-fight interview with Showtimes’ Jim Gray, he eagerly said he wants a rematch. He thought he did enough to deserve the decision. “I made him look foolish,” he moaned. When Gray interviewed Canelo, he asked the same question about wanting a rematch. Canelo said sure, if he will come to fight instead of running, which sounds suspiciously like, “No, there is not going to be a rematch.”

In the fights leading up to the main event, Mauricio Herrera came away with a tough decision over Johan Perez. Both fighters battered each other, and both looked spent by the time the final bell sounded. Herrera was just a little busier.

Juan Manuel Lopez just doesn’t have it anymore. His reflexes are gone. Whenever he attempts to exchange, he comes out on the losing end. His shots are slower and wider. As a result he gets tagged and when that happens, his equilibrium is affected and he’s on queer street. He drops his guard, making himself vulnerable for even more damage.

In the third round, there was a furious exchange, but Lopez was just a hair slower than Francisco Vargas. As a result, he got tagged with a hard right. Everything changed from Lopez’ facial expression to his posture. Vargas landed another punch, a left that cuffed the back of Lopez’ head. With a follow through, or push, Lopez went down.

He beat the count, but he was in rough shape. Fortunately for him, the bell sounded, but he was so foggy headed, that he needed help to get back to his corner. Everyone defended on that corner, all wanting to know if he wanted to continue, and more importantly could he continue? The consensus was “no”. So the fight was halted, an RTD 3rd round.

Abner Mares returned to the ring after a long lay off. He needed to answer questions such as “Would he be sharp? Was his confidence damaged by getting knocked out in the first round in his fight with Jhonny Gonzalez back in August of 2013?” Saturday night he was presented with a tough test in Jonathan Oquendo.

Oquendo was a tough veteran, who had sixteen knockouts on his record. He definitely planned on testing Mares’ chin. He came out looking confident. He wanted to be the aggressor, so he started throwing combination right away in the first round, but he was missing. Mares was content with that.

In the second Mares started throwing some shots to the body of Oquendo. He began to out hustle his opponent, but all of a sudden he came out of exchange with a bad cut to his left eyelid. Oquendo was encouraged and stepped thing s up.

Now there was a danger that Mares could lose on a TKO because the cut was ruled the “result of a punch”. Oquendo didn’t take advantage. He was tentative, and quit using his jab. Mares would rip off a combination and then get out of range. He kept outworking Oquendo. In the eighth round, Oquendo suffered a cut over his left eye. Mares corner had done a great job stemming any bleeding with his cut. It never became a factor.

The key to Mares’ win was he was busier. His lateral movement kept Oquendo off balance and tentative. He let Mares outwork him, and as a result Mares came away with a UD decision. In his post fight interview with Gray, he expressed satisfaction with his performance. He said he was ready for anyone in the division. His record now stands at 27-1-1 with 14 kayo’s.