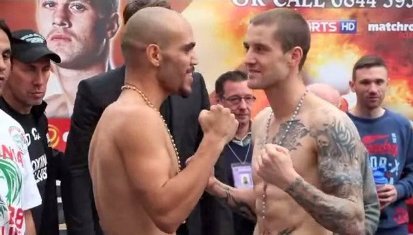 Beltran appears all business and arrived in Scotland early to acclimatise and put the final touches to his training camp. ‘Sugar’ has unsurprisingly received the backing of his former sparring partner Manny Pacquaio to upset the champion. However the 32 year old orthodox boxer has contested all 34 of his professional bouts in Mexico and the USA and will have to overcome both Ricky Burns and a raucous Scottish crowd if he is to become a world champion.

We asked boxing fans to give us their predictions as to how this highly anticipated lightweight title fight will unfold. Presented below are some of the responses we received.

It’ll be a wide UD points win for Ricky Burns”

“Burns will be looking for improvement on his last showing. Burns to force stoppage in 9”

“Burns by stoppage in the 7th”

“Beltran has sparred with the best out there but I see Burns dealing with him without a doubt. Late stoppage”

“Burns on points for me”

“Burns will stop him late on. Looking forward to seeing him in a super fight with Broner”

“I expect Ricky to win either late TKO or wide UD”

“Burns wide points margin. The Scottish weather already has Beltran on the ropes”

“Burns wins by stoppage rounds 10-12 in a boxing clinic”

“Want Burns to win but think he will lose sadly”

“Burns on points. He was some way off his best last time out. He may stop him but I’m erring on the side of caution”

There is clearly huge support for the champion Ricky Burns and he is a heavy favourite with boxing fans to get the job done tonight against a worthy and tough challenger in Raymundo Beltran.

The fight will air live tonight on Sky Sports with Matchroom Sport putting on a yet another strong boxing show for UK fight fans.