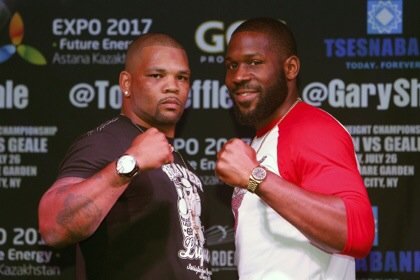 New York City (June 9, 2014) Undefeated heavyweight’s BRYANT “By By” JENNINGS and MIKE “The Rebel” PEREZ will clash in a World Boxing Council (“WBC”) Heavyweight Title Eliminator on SATURDAY, JULY 26 at The Mecca of Boxing, Madison Square Garden. The fight will be televised Live on HBO World Championship Boxing® beginning at 9:30 p.m. ET/PT, it was announced today by K2 Promotions and Gary Shaw Productions in association with Antonio Leonard Promotions.

The winner of the 12-round bout will become the mandatory challenger for the WBC Heavyweight Title, which was vacated by longtime champion Vitali Klitschko earlier this year.

The Jennings/Perez bout will serve as the co-feature to the WBA/IBO World Middleweight Championship defense by GENNADY “GGG” GOLOVKIN against two-time world champion DANIEL “The Real Deal” GEALE.

“I commend HBO for sticking to their guns on making Jennings vs. Perez happen after the fight was called off.” said Gary Shaw. “I know Bryant is thrilled to be returning to the Madison Square Garden where he made his HBO debut and defeated Artur Szpilka who was undefeated at the time. Jennings is eager to show everyone he’s the best heavyweight contender out there. This will be a fight the fans will not want to miss. The next great American heavyweight will be on display, and I’m talking about Bryant Jennings.”

“We feel that Mike is among the best heavyweights in the world and expect him to show that on July 26 against Bryant Jennings.”

“The fight is on again and I’m ready to make a statement against Perez,” said Jennings. “My fans can expect another great performance on July 26 as I return to the Madison Square Garden. HBO shows it’s serious about bringing the heavyweight division back to its glory days by making this fight happen and I’m here to make a name for myself. I want to thank Mauricio Sulaiman for including me in the Heavyweight tournament, giving me an opportunity to fight the winner of Wilder vs. Stiverne for the WBC world title.”

“The WBC is proud to sanction the fight between Perez vs. Jennings as a final elimination fight as part of the WBC tournament in the Heavyweight division,” stated Mauricio Sulaiman, President of the World Boxing Council.

“Vitali Klitschko was honored with the Emeritus Champion distinction after he decided to dedicate his career to the politics of his country Ukraine and he is being regarded as a hero by many.”

“The WBC ordered a tournament between all the top rated fighters to fight and Perez vs. Jennings will prove to be a formidable match to find the second mandatory contender of the WBC Heavyweight division. “

The 29-year-old Jennings, 18-0-0 (10KO’s) is coming off his career best victory, a sensational, HBO televised tenth round knockout of Poland’s Artur Szpilka on JANUARY 25 at Madison Square Garden in New York City. Dominating the action from the outset, Jennings dropped the crafty southpaw in the sixth before finishing him off in the final round.

A highly successful amateur in his native Cuba, the 28-year-old Perez has compiled a record of 20-0-1 (12KO’s), since moving to Ireland and turning professional in 2008.

Perez has recently made two previous appearances on HBO and is looking forward to showcasing his skills against another undefeated fighter on July 26th.