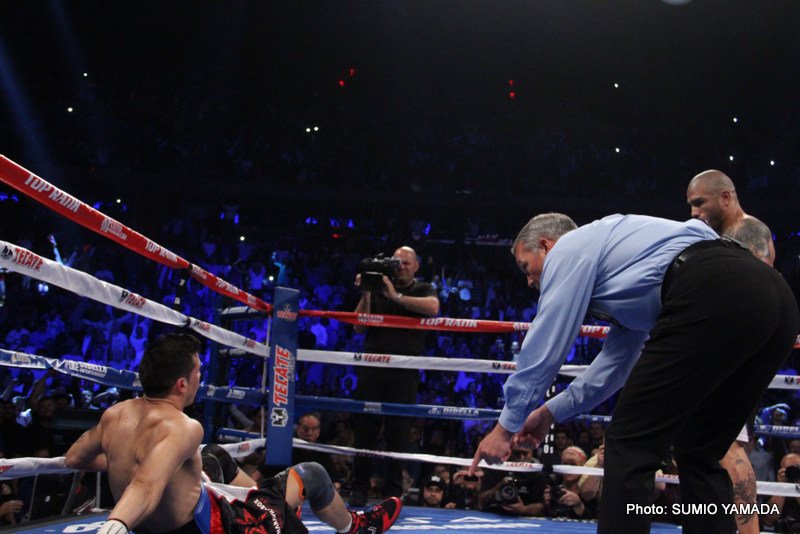 The fight was not only exciting in the action/thriller aspect but it was an interesting match of prototypes and styles, tactics and even body/muscle types. A southpaw vs. an orthodox stance, a taller boxing type against a stocky brawler (the roles were reversed quickly), a rangy straight striker vs. a hook happy slugger. Another detail that separated them was their background – Cotto started boxing as a child and developed into a top amateur boxer before he turned pro while Martinez first went into a boxing gym after he had turned twenty years of age and turned pro two years later. The main difference between late starters and “hardcore” boxers who boxed in their teens is the way they act after they get hurt. When a “hardcore” is hurt and can hardly remember his name, he still looks and acts like a boxer until he can stand, the skills are embedded in the muscle memory. If a late starter is hurt, he is a mess and forgets not only his name but his boxing habits as well – boxing is not his “second nature”, other instincts take over.

Miguel Cotto demonstrated commendable progress in his tactics and Freddy Roach has worked on his passive boxing as well – the things you do when you are not attacking or defending such as position choice, irregular angle shifts and rhythm variations. His main new asset was the culture of his movement – he was economical, poised, rational and his front foot toes usually pointed to the opponent’s center mass. Another asset was his punching discipline. There were absolutely no telegraphs from Cotto, he kept good balance even with his hardest shots and did not allow his torso to get ahead of his feet when shifting his weight with hooks. The Roach approach was not to try and reshape a finished product by teaching new skills – that is not plausible at this stage. He simply eliminated stuff that doesn’t work and concentrated on polishing elements that were solid and reliable. It’s like having a table of tools and removing the ineffective ones while tuning up and sharpening the good ones that you keep. Roach did not improve Cotto’s game by teaching new lessons; he helped by making him forget about impractical moves and shots. There was a discernible litheness in the arms of Cotto – he did not load up and commit with shots like he used to yet his shots seemed much harder. Freddy Roach has brought “the bullet effect” to Miguel Cotto’s shots – he does not hit harder than before but the shots land unexpectedly for the opponent and he can not cushion or dampen the effect.

Cotto’s left hook was the wrecking ball that demolished Sergio Martinez in the first round and kept him sedated throughout the fight. Miguel landed a beautiful right hand 15 seconds after the opening bell and continued to find the target with it setting up his left hooks. There was an old school feeling to the way he retracted his left hand when he missed with a hook – the shoulders were square over balanced feet and the arm swiped in front of the face meaning to block any incoming counters. A great left hook against a great southpaw is a rarity- once is remarkable, twice is fortunate, after that …it’s rude.

Cotto’s body punching must be mentioned because it contributed to the demolition job. Cotto strikes in a different way when he throws to the body – he is no longer relaxed and lithe but pushes hard into shot. That is the best way because the internal organs are well protected by flesh and the “armor’ must be penetrated. A good head shot can be a bad body shot and vice-versa.

The ref could have called it off in the first round and no one could blame him except the fans, especially Sergio’s fans. He did a commendable job as there was no 3 knockdown rule in effect and he allowed a good champion to try and shake off a bad spell. Martinez is/was a top 5 pound for pound fighter and he is known for his second wind and strong finales. As it turned out, it wasn’t just a spell as Cotto brought a sustained and organized health hazard to Sergio Martinez. I truly hope Martinez does not suffer long term consequences because there is no coming back from mayhem like that.