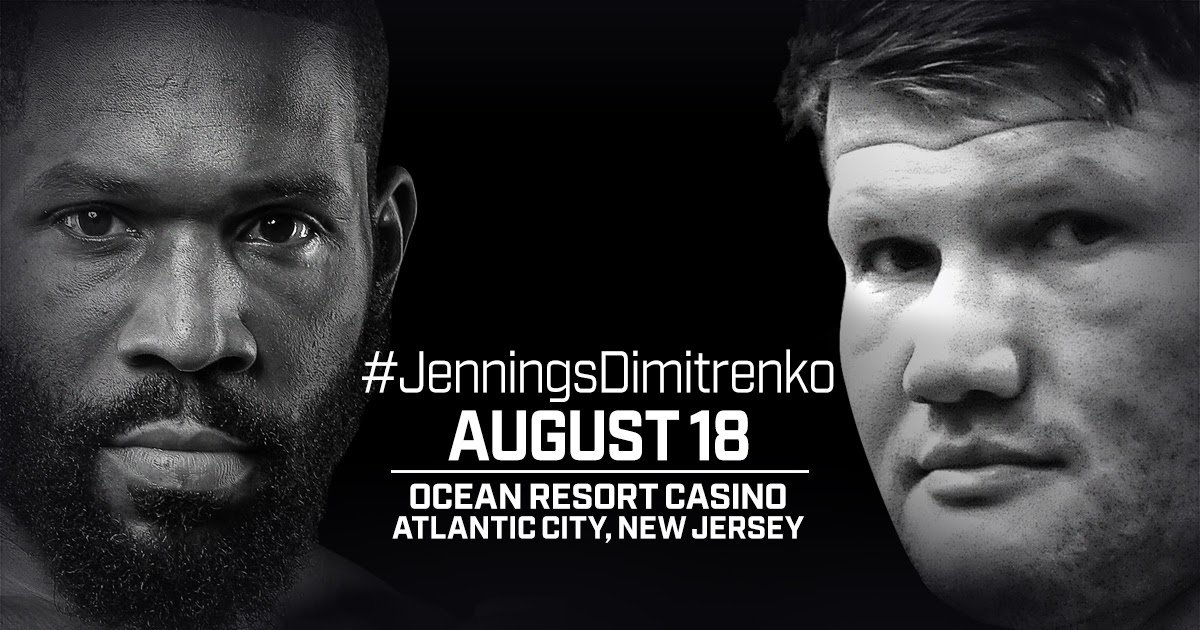 Heavyweight contender Bryant “B.Y.” Jennings was born and bred in Philadelphia, but on Saturday, August 18, he aims to bring some of that Philly firepower to the Atlantic City Boardwalk.

In the co-main event, Philadelphia native Jesse “Hollywood” Hart (24-1, 20 KOs) will defend the NABF super middleweight title in a 10-rounder against the battle-tested Mike Gavronski (24-2-1, 15 KOs).

Jennings-Dimitrenko and Hart-Gavronski will be televised LIVE on ESPN and ESPN Deportes at 10 p.m. ET, and all undercard bouts will be streamed on ESPN+ beginning at 7 p.m. ET.

“Dimitrenko is a big, competitive fighter,” Jennings said. “I worked very hard to gain my position in the heavyweight division. Every fight for me is a risk. While I’m confident in myself, I don’t take any opponent lightly. Boxing fans can expect me to bring my best.”

“I am looking forward to this fight, as this is an opportunity to advance in the heavyweight division,” Dimitrenko said. “I love to train and push myself to the limit. I want to be great. I’ve never had so much fun in boxing. The fight against Jennings comes at just the right time, and I will take advantage of this opportunity.”

“I’m excited to be back in Atlantic City. I know that my hometown fans will show up, and I will put on a spectacular performance,” Hart said. “Gavronski is a good test. He’s durable, and I know this fight will be great for boxing and boxing fans.”

“It’s a wonderful place to showcase my talents. This is what you live for,” Gavronski said. “Hart is a tough guy who can do a lot of nice things. I just think I can do them a lot better. If you want to be the best, you have to beat the best. I am willing to fight anybody. I love the challenge.”

Jennings is a heavyweight with momentum, having won four consecutive bouts since making his Top Rank debut last August. In his last bout, April 28 in Philadelphia against Joey Dawejko, he won a 10-round unanimous decision. Ranked No. 8 by the WBO, a win over Dimitrenko will move him closer to a second world title shot. Jennings put the heavyweight division on notice on April 25, 2015, when he gave unified champion Wladimir Klitschko a tough test en route to a decision loss. Following a knockout loss to Luis Ortiz later that year, Jennings took a 20-month break from the ring before signing with Top Rank.

Dimitrenko, a longtime contender, turned pro in 2001 and won the first 29 bouts of his career before dropping a majority decision to Eddie Chambers on July 4, 2009 in a WBO title eliminator. He won the European heavyweight title in 2011 with a fifth-round TKO over Yaroslav Zavorotnyi and made two successful title defenses. Following a third-round stoppage loss to eventual WBO heavyweight champion Joseph Parker in October 2016, Dimitrenko went 3-0 in 2017, including a first-round stoppage of then-undefeated prospect Adrian Granat.

Hart’s nickname may be “Hollywood”, but he is a Philadelphia fighter to the core. His father is Eugene “Cyclone” Hart, a former middleweight contender who thrilled Philadelphia fight fans in the 1970s with pitched battles against the likes of Bennie Briscoe and Bobby Watts. Hart has won two consecutive bouts since dropping a unanimous decision to Gilberto “Zurdo” Ramirez for the WBO super middleweight title last September. In his last bout, April 28 in Philadelphia, he knocked out Demond Nicholson in the seventh round to keep his hopes of a Ramirez rematch alive. Hart’s world title quest will go through Gavronski, a native of Tacoma, Washington, who is riding a five-bout unbeaten streak dating back to November 2015.

Former WBA super featherweight champion Jason Sosa (20-3-4, 15 KOs) of Camden, New Jersey, will take on Reynaldo Blanco (14-4, 8 KOs). Sosa, who has dropped two in a row, is seeking to get back into contention in the 130-pound division.

Joseph Adorno (7-0, 7 KOs), who is also scheduled to fight July 7 in Fresno, California, will see action in a six-rounder.

And, in a heavyweight special attraction, Oleksandr Teslenko (13-0, 11 KOs) will fight an opponent to be determined.

Use the hashtags #JenningsDimitrenko and #HartGavronski to join the conversation on social media.