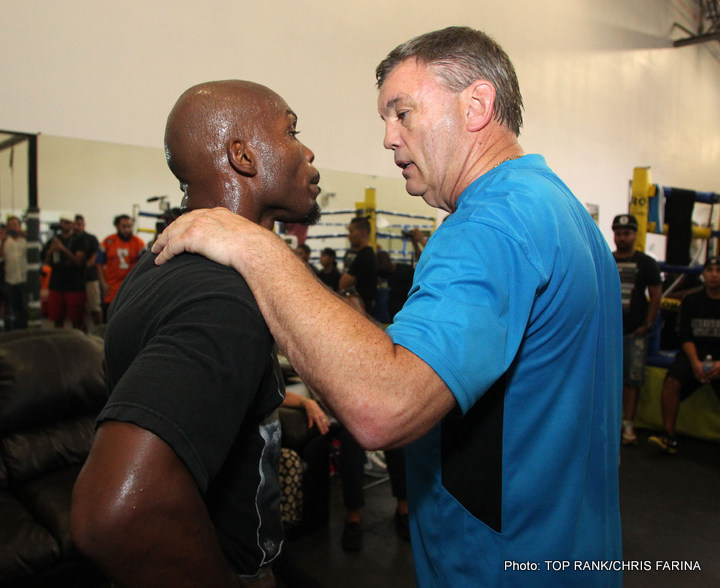 Timothy “Desert Storm” Bradley steps in the ring with “Bam Bam” Brandon Rios Saturday night live on HBO from Las Vegas at the Thomas & Mack Center. The hype or lack of hype heading into fight week is really no surprise. After all Floyd Mayweather just fought in sin city two months ago and in two weeks time the Mandalay Bay hosts Canelo vs. Cotto.

With both men hailing from California it would’ve been a nice fit at The Forum, its original spot. Unfortunately a miscommunication occurred and the end result is a pretty decent scrap in the wrong venue. The fight itself isn’t that great of a matchup at welterweight. A few years back it may have been seen as a showcase. That’s not to say this scribe won’t be excited once the bell rings, it’s just not an event the public demanded.

In the last year under Top Rank Timothy Bradley has been in a fight, rinse, and repeat mode. Having already stayed busy against Diego Chaves last December one would assume that Timmy would be in line for a high profile bout. Instead he faced Jessie Vargas in June, an interesting fight with a horrible ending.  So after two mid-level bouts on HBO the next one had to big right? Wrong.

In walks Brandon Rios fresh off his impressive victory over an unprepared Mike Alvarado. Rios has been looking for another fight all year and from his point of view, clearly this is a huge step up for him. And good for him, I can only hope he takes the rest of his career as serious as he has his last two camps.

Now clearly the rift between Top Rank and HBO has played a part in Bradley not being able to secure a worthy fight. That and his recent split with long time manager Cameron Dunkin. To make matters worse Top Rank just doesn’t have the depth for Bradley at 147 and most of real challenges are under Al Haymon’s advisor umbrella.

So now the plan coming from Arum is to put Bradley, if successful on Saturday, in with Canelo should he defeat Miguel Cotto. Cotto was once mentioned as a 154 opponent before heading the Roc Nation. So like many Top Rank fighters, Terrence Crawford included, 2015 was a stay busy year with major names on the horizon in 2016.

Anyway let’s get back to the meat and potatoes of this scrap shall we. For all the negatives in this article a full smile will be on my grill at first bell. The styles will matchup favorably and we should get decent two-way battle for the first half of the fight. Once Timothy finds his groove so to speak, it will probably turn one-sided with pot shots and busy work on the outside.

Let us not forget Bradley versus Lamont Peterson several years back. Timmy started strong and even dropped Peterson with a perfectly time right hand on the way in. Once Peterson closed the gap he was able to dig to Bradley’s body enough for Timothy to switch his game plan up. For the rest of that fight Bradley used subtle foot movement, a steady jab, and right hand pot shots.

Teddy Atlas will implement a smart strategy against a brawler in Rios who’s only real hope is scoring a knockdown and pushing the pace. I assume Bradley will be cautious early but wouldn’t be shocked if he stood and exchanged in spots. People forget how much of an aggressive and scrappy Bradley is, and was on his way up the ranks. It’s not like his former trainer Joel Diaz wasn’t asking his fighter to box when he engaged in a war with Ruslan Provodnikov.

There’s a list of certainties that an in-shape Rios brings to a prize fight, balls, a sturdy chin, power, and a pretty damn good jab. When operating at an optimum level Brandon Rios is warrior and worth every penny of admission. All that said, he still can be outfoxed and is not the fastest when it comes to hand and foot speed.

If he implements his make-it-nasty by attack the body game plan, he does have a shot to upend the Desert Storm.

If Brandon Rios were to win it would be one of the bigger upsets of the year. Maybe Rios is catching Bradley at the perfect time as he has show a decrease in performance in the last two outings? Or maybe we have only caught a glimpse of what Bam Bam can do because of his out of the ring habits. Here’s hoping that we have only seen the real Rios a few times in his career and the hungry he speaks of is 100% back and here to stay.

It begins as a good ole-fashion scrap will soon evolve into a whitewashing in the second frame. I have to admit I do love me some Brandon Rios but Bradley is a clear level above Bam Bam.

My official prediction is Timothy Bradley by Unanimous Decision.

Side Note: Don’t miss a nice U.K tussle between Callum Smith and Rocky Fielding on Saturday! In what is close to a pick’em fight, I’m leaning with Callum Smith. Also ShoBox: The New Generation returns Friday on Showtime.

Written by Chris Carlson Owner and Host of Rope-A-Dope-Radio blogtalkradio.com/ropeadoperadio