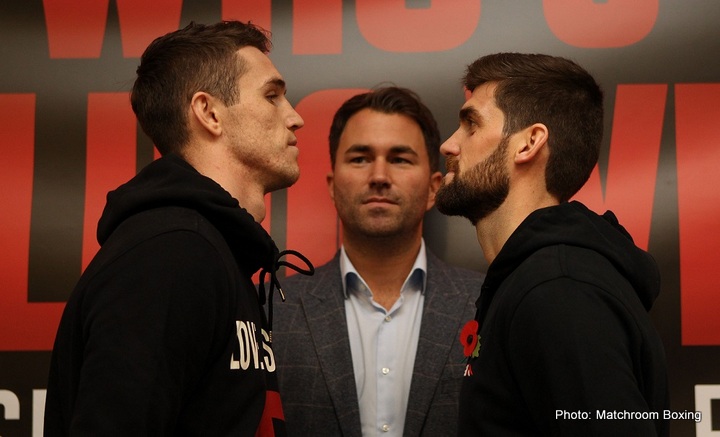 photo by Lawrence Lustig – Callum Smith, 17-0 (12KO’s), and Rocky Fielding, 21-0 (12KO’s), will meet on Saturday in their eagerly anticipated clash for the vacant British super-middleweight title in Liverpool’s Echo Arena.

There’s nothing quite like a British title fight, especially one involving two local rivals in their own parish. However, this fight goes far beyond the coveted Lonsdale strap, with both fighters sight firmly fixed on World honours.

With both men ranked in the top 15 of all 4 major sanctioning bodies – Smith WBC #1 and Fielding IBF #5 – those opportunities to challenge for World honours are just around the corner.

In the wake of elder brother Liam’s October light-middleweight World title triumph – becoming the first legitimate World champion from Liverpool since Paul Hodkinson relinquished his WBC World featherweight crown to Gregorio Vargas in 1993, Callum will be looking to make his own contribution to the Smith family history.

Should the youngest of the 4 emerge victorious, it will be the first time 4 brothers have claimed a British title, a record likely to stand for the foreseeable future.

An achievement in of itself, but this is an individual sport and Smith knows a decisive victory set’s up a World title fight in 2016 and is confident he has everything it takes to dispose of Fielding.

“I think I beat him in every department to be honest. I think I can beat him in many ways.” Said Smith. “If he wants to go on the back foot I believe I am the better stand up boxer, I’ve got a better boxing brain and better technically. If it’s an inside fight then I think I am better than him in close, a better body puncher and a better head puncher. 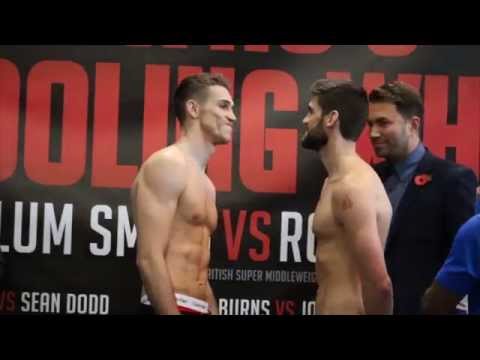 “He keeps talking about his power, if that’s the only way he thinks he can win then so be it but I think he is reading too much into that. He’s got a short memory too because I’ve KO’d two guys that he couldn’t, so if we’re going off that, then who is to say he’s the puncher in the fight? I think he thinks he has one way of winning but I have many.

“All of a sudden he thinks he’s a massive puncher because he’s KO’d Vera, but the fight before that, Rocky was taken eight rounds by a journeyman that I knocked out in one round, you should be getting guys like that out of there inside the distance. If he wants the fight to be a shootout then fine, I am 100 per cent confident that I win and will do it earlier than if it was a boxing match, but we won’t know how it’s going to go until the first bell.

It’s difficult to argue with Smith, who has looked sensational since turning professional in 2012, racking up 12 stoppages and impressive victories over seasoned fringe World level fighters in Nikola Sjekloca and Christopher Rebrasse.

Fielding on the other hand is looking to upset the apple cart.

Trained by respected Manchester based trainer Oliver Harrison, Fielding has improved markedly over the last year, with empathic victories over Noe Gonzalez Alcoba and Brian Vera.

Despite these victories being dismissed by Smith’s followers, what is clear is Fielding can punch and given the opportunity, believes he will prove it.

“It’s a great fight, one I am confident that I can win, and I think I will knock him out,” said Fielding. “He’s been in with Sjekloca and Rebrasse who cannot punch and gone the distance.

“They caught him with shots that if I threw them, they would hurt him. He’s a good fighter, he’s doing his thing, and I knew that they would say they have not seen anything different from me, but when we get in there they will see what I am capable of.”

Unlike DeGale and Groves before them, the trash talk has been kept to a minimum – from the fighters at least – both quietly confident of victory and respectful in each other’s presence. A refreshing development that almost all of the fighting will take place in the ring.

The fight has been perfectly timed and the tickets have gone as a result, Fielding put it best when he said.

“The city has wanted a massive fight for years and we’re going to deliver it.”